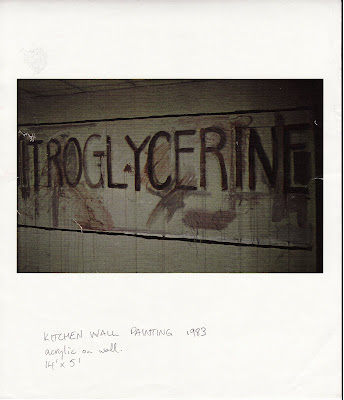 The above photo is a mural I painted in a kitchen in the early 80's. It was 14'x 5'...and usually shocked my vistors.

I am doing some major re-organization. We are putting some books and cd's into storage in a back closet and trying to make room for office area...and just general spring cleaning. Okay, pre-winter cleaning.

I hve a lot of paperwork and Stagg and I are in the middle of adjusting stuff. Marriage stuff so I need some office space. So...I've been going through our archives, photo albums, and letters and sheesh all kinds of stuff. I found some of these old photo cpopes made from slides. Do uyou remember slides? Artists generally used to record their work on slides to present to galleries for shows or grants or project proposals. Now everything is digital. So...I thought I'd post a few paintings from the old days...if you are inclined, you can click on the images and they are easier to see details. 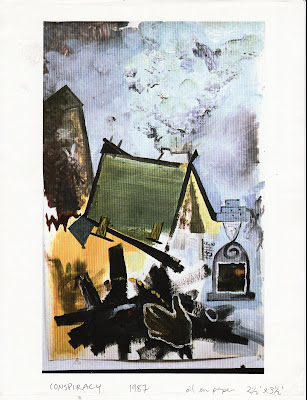 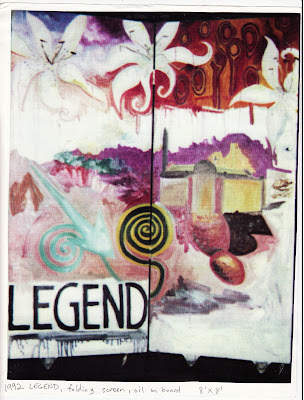 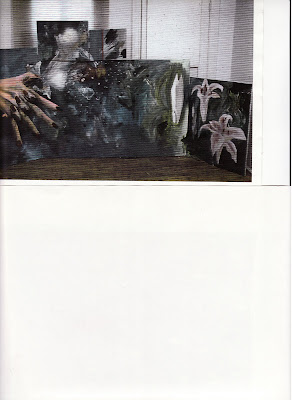 "ANITA AND THE MOST UNFORGETABLE WOMEN" another folding screen...14'x5' oil on canvases. I usually hinged my screens with piano hinges. They are large and industrial strength yet not bulky. I still own this painting, or rather my daughter has this one. I was inspired by my good friends and an old Revlon advert that had hands opening a champagne bottle. The original ad had such an allusion to hand jobs and spurting moisture...who could resist sampling such an image? One of the many things I love about rap (and hip hop) is the sampling...as a visual artist who uses a lot of collage...sampling in rap is a natural relative. 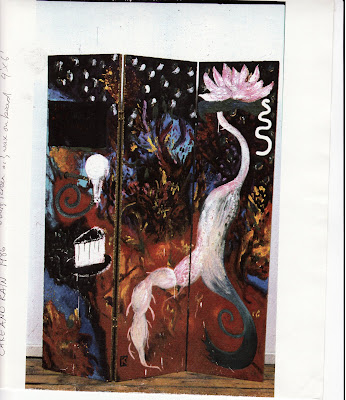 I still own this painting. It's in a storage unit...with a bunch of other stuff...original film on 16mm...slides, books. This one is a screen painted on both sides with encaustic. Encaustic is paint you can mix by using oil paints (I've used crayons too) with bees wax. It smells gorgeous...and it is a good use for those old 70's electric frying pans. I used to put water half way then use an assortment of soup cans and lay in the bees wax and oil paint. Fun...but also kind of high maintenance in order to make sure you ge an image. Sometimes people who use encaustic manage a cartoony effect, the paint wants to solidify so quickly. It's challenge to get details but it is fun! 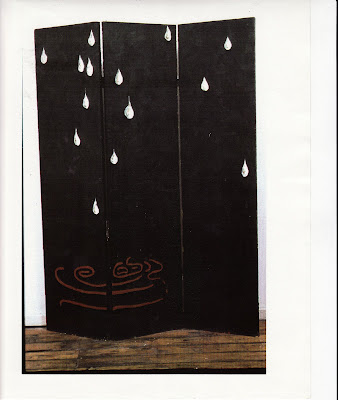 This is the flip side of the painting above. See....again the idea that music was part of my concepts. I loved the idea of a A-side and a B-side to a painting and the 3-dimentional screen format really is satisfying and cool in that way. I am going to pick up some of those doors you can find in hardware stores. They are made out of masonite (or hardboard) and make perfect sections for folding screens. The two photos above are representing a screen that is called "CAKE AND RAIN" and is 4'x6'. 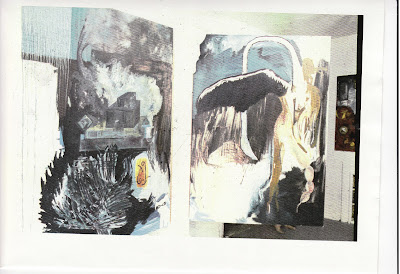 Well, this one is particularily difficult to see here. This painting is called "THE SWAN, THE BANDIT AND THE RESURRECTION". I painted this in 1986 after I had read the novel Blood Meridian for the first time, and a conspiracy book called Holy Blood Holy Grail. I was always fascinated with the Hermetic Tradition,/li>, Nicolas Pisarro, and the phrase "et arcadia ego" and how these connected in art work, and in Shakespeare and many Renasaince works. This is one of my favourite paintings and I also believe I still have it...but it's not really that audience friendly. The coloours are testing. This too is a folding screen but instead of attaching the canvases to each other...I attached them to a pillar in the gallery. It is also large at 14'x10'. I don't know hwo well you can see details, but there is swan on the right that morphs into a root of ginger. On the left is a kind of tomb (I said I was into Pisarro remember heh ) and the "bandit" is a reference to one of my favourite cartoons, Johnny Quest. You might be able to see the little dog and his bandit mask in the left panel near the bottom right. 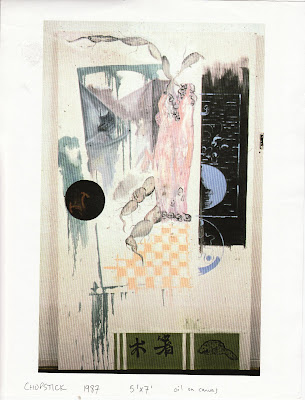 I love Conspiracy! Something about the color of the tent...

I remember NITROGLYCERINE. Was that Empire Ave?

Beautiful.. I dont have a favorite. They are all very neat paintings...

How great to see these paintings again, although I hadn't seen the kitchen one or conspiracy before. The first made me laugh and the second I really love, the colours, shapes, everything touched by smoke or black.

Mr. A, yep, good ol Empire Avenue. That was probably my secnd favourite place to live, the first 414 Jarvis!

Tweety, wow, thanks glad you enjoyed the walk down memory lane!

Underground Baker, howdy, I will go to my e-mail shortly. Yes, the kitchen painting was done at a time when you didn't get out to Toronto...it was though a phase you are familiar with ...when everything in my kitchen had to be red or black...heh heh. Now I am in a blue and purple kitchen appliance phase. Have you seen the low end Le Cruestet products? They are killer...bright blue, green yellow! I saw them displayed in special area at Whole Foods the other day. Mostly enamelled metal...wonderful!