We are so excited to have interviewed radical queer activist balladeer Scott Free. You can buy his cd here  THE LAST REVOLUTION here which just dropped on JUly 3.
And you can listen to our interview here....Scott Free podcast interview
Posted by Candy Minx at 12:14 No comments:

Here is our new episode we talk about Spike Lee's new movie here at this link:PODCAST
Thank you so much for listening!!! We really appreciate our listeners and friends of podcast. We have some fun interviews upcoming and we would love to hear from you!
Email us at theagency.podcast@gmail.com
Posted by Candy Minx at 10:23 No comments:

I've got some new paintings on the go. I use a lot of turpentine in the early layers of painting...and I funed myself out one day. So we put the wet oil paintings on the fire escape. Here is some of what I'm up to... 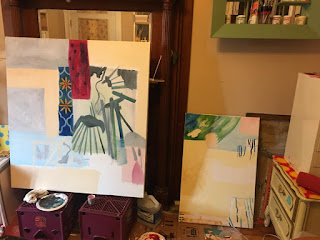 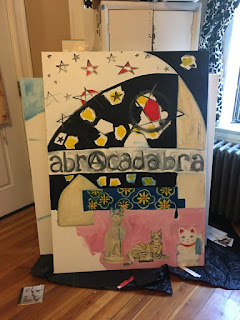 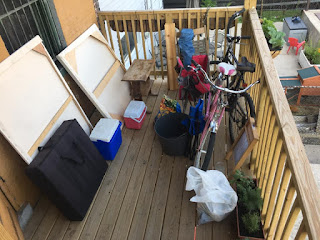 Thank you to our listeners and friends, we really appreciate you joining us on our podcast and your emails and thoughts.
We talk about Spike Lee's new movie released on Netflix this week. I hope you watch it it is so good. I dreamed about it, MIRACLE AT ST. ANNA, and oil painting last night. I thought in my dreams this new movie is a "healing machine"...I'm pretty sure that is too corny a word for a Spike Lee movie....but then I found Spike Lee says its a "teaching moment"...I know we are going to talk some more next week on our podcast...so I hope you'll check it out.
Spike Lee interview
Here is The Agency podcast for apple devices. Scroll to post below for android link.
You can email us at:
theagency.podcast@gmail.com
Or send us snail mail to:
The Agency
C/O Anthony Stagg
P.O. Box 891280
1859 South Ashland Avenue
Chicago, Il.
60608
USA
Posted by Candy Minx at 12:47 No comments: 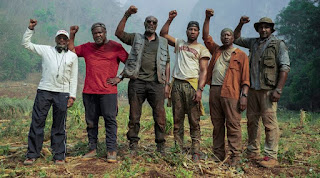 Another week of finding culture at home under quarantine. Fortunately Spike Lee dropped a brilliant movie on Netflix called DA 5 BLOODS. We talk about it this week on The Agency podcast.
<iframe title="Special Forces" src="https://www.podbean.com/media/player/kxp5x-e013fd?from=usersite&vjs=1&skin=1&fonts=Helvetica&auto=0&download=1" height="315" width="100%" style="border: none;" scrolling="no" data-name="pb-iframe-player"></iframe>
Posted by Candy Minx at 20:21 No comments:

Congressional Democrats want to make it easier to identify and prosecute police misconduct; Joe Biden wants to give police departments $300 million. But efforts to solve police violence through liberal reforms like these have failed for nearly a century.

Enough. We can’t reform the police. The only way to diminish police violence is to reduce contact between the public and the police.

There is not a single era in United States history in which the police were not a force of violence against black people. Policing in the South emerged from the slave patrols in the 1700 and 1800s that caught and returned runaway slaves. In the North, the first municipal police departments in the mid-1800s helped quash labor strikes and riots against the rich. Everywhere, they have suppressed marginalized populations to protect the status quo.

So when you see a police officer pressing his knee into a black man’s neck until he dies, that’s the logical result of policing in America. When a police officer brutalizes a black person, he is doing what he sees as his job.

Now two weeks of nationwide protests have led some to call for defunding the police, while others argue that doing so would make us less safe.

The first thing to point out is that police officers don’t do what you think they do. They spend most of their time responding to noise complaints, issuing parking and traffic citations, and dealing with other noncriminal issues. We’ve been taught to think they “catch the bad guys; they chase the bank robbers; they find the serial killers,” said Alex Vitale, the coordinator of the Policing and Social Justice Project at Brooklyn College, in an interview with Jacobin. But this is “a big myth,” he said. “The vast majority of police officers make one felony arrest a year. If they make two, they’re cop of the month.”

We can’t simply change their job descriptions to focus on the worst of the worst criminals. That’s not what they are set up to do.

Second, a “safe” world is not one in which the police keep black and other marginalized people in check through threats of arrest, incarceration, violence and death.

I’ve been advocating the abolition of the police for years. Regardless of your view on police power — whether you want to get rid of the police or simply to make them less violent — here’s an immediate demand we can all make: Cut the number of police in half and cut their budget in half. Fewer police officers equals fewer opportunities for them to brutalize and kill people. The idea is gaining traction in Minneapolis, Dallas, Los Angeles and other cities.

History is instructive, not because it offers us a blueprint for how to act in the present but because it can help us ask better questions for the future.

The Lexow Committee undertook the first major investigation into police misconduct in New York City in 1894. At the time, the most common complaint against the police was about “clubbing” — “the routine bludgeoning of citizens by patrolmen armed with nightsticks or blackjacks,” as the historian Marilynn Johnson has written.

The Wickersham Commission, convened to study the criminal justice system and examine the problem of Prohibition enforcement, offered a scathing indictment in 1931, including evidence of brutal interrogation strategies. It put the blame on a lack of professionalism among the police.

After the 1967 urban uprisings, the Kerner Commission found that “police actions were ‘final’ incidents before the outbreak of violence in 12 of the 24 surveyed disorders.” Its report listed a now-familiar set of recommendations, like working to build “community support for law enforcement” and reviewing police operations “in the ghetto, to ensure proper conduct by police officers.”

These commissions didn’t stop the violence; they just served as a kind of counterinsurgent function each time police violence led to protests. Calls for similar reforms were trotted out in response to the brutal police beating of Rodney King in 1991 and the rebellion that followed, and again after the killings of Michael Brown and Eric Garner. The final report of the Obama administration’s President’s Task Force on 21st Century Policing resulted in procedural tweaks like implicit-bias training, police-community listening sessions, slight alterations of use-of-force policies and systems to identify potentially problematic officers early on.

But even a member of the task force, Tracey Meares, noted in 2017, “policing as we know it must be abolished before it can be transformed.”

The philosophy undergirding these reforms is that more rules will mean less violence. But police officers break rules all the time. Look what has happened over the past few weeks — police officers slashing tires, shoving old men on camera, and arresting and injuring journalists and protesters. These officers are not worried about repercussions any more than Daniel Pantaleo, the former New York City police officer whose chokehold led to Eric Garner’s death; he waved to a camera filming the incident. He knew that the police union would back him up and he was right. He stayed on the job for five more years.

Minneapolis had instituted many of these “best practices” but failed to remove Derek Chauvin from the force despite 17 misconduct complaints over nearly two decades, culminating in the entire world watching as he knelt on George Floyd’s neck for almost nine minutes.

Why on earth would we think the same reforms would work now? We need to change our demands. The surest way of reducing police violence is to reduce the power of the police, by cutting budgets and the number of officers.

But don’t get me wrong. We are not abandoning our communities to violence. We don’t want to just close police departments. We want to make them obsolete.

We should redirect the billions that now go to police departments toward providing health care, housing, education and good jobs. If we did this, there would be less need for the police in the first place.

We can build other ways of responding to harms in our society. Trained “community care workers” could do mental-health checks if someone needs help. Towns could use restorative-justice models instead of throwing people in prison.

What about rape? The current approach hasn’t ended it. In fact most rapists never see the inside of a courtroom. Two-thirds of people who experience sexual violence never report it to anyone. Those who file police reports are often dissatisfied with the response. Additionally, police officers themselves commit sexual assault alarmingly often. A study in 2010 found that sexual misconduct was the second most frequently reported form of police misconduct. In 2015, The Buffalo News found that an officer was caught for sexual misconduct every five days.

When people, especially white people, consider a world without the police, they envision a society as violent as our current one, merely without law enforcement — and they shudder. As a society, we have been so indoctrinated with the idea that we solve problems by policing and caging people that many cannot imagine anything other than prisons and the police as solutions to violence and harm.

People like me who want to abolish prisons and police, however, have a vision of a different society, built on cooperation instead of individualism, on mutual aid instead of self-preservation. What would the country look like if it had billions of extra dollars to spend on housing, food and education for all? This change in society wouldn’t happen immediately, but the protests show that many people are ready to embrace a different vision of safety and justice.

When the streets calm and people suggest once again that we hire more black police officers or create more civilian review boards, I hope that we remember all the times those efforts have failed.

From Mariambe Kaba Opinion piece in New Yprk Times
Posted by Candy Minx at 10:23 No comments: 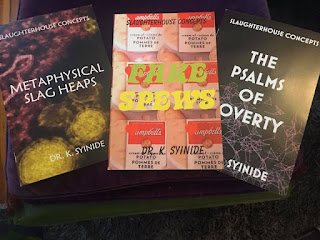 A good friend Dr. K. Syinide has awesome chapbooks. You can visit his site here click here....and order some for yourself!
Posted by Candy Minx at 21:14 1 comment: