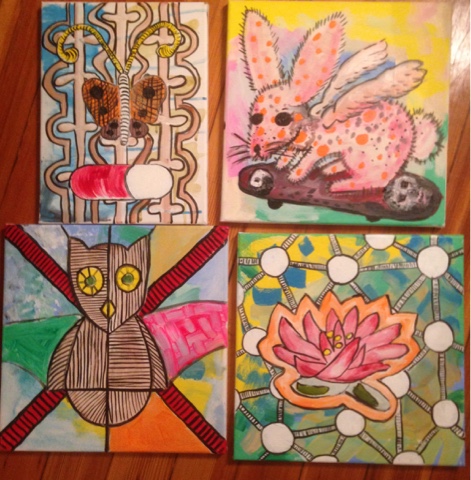 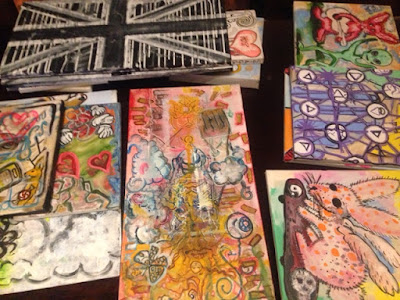 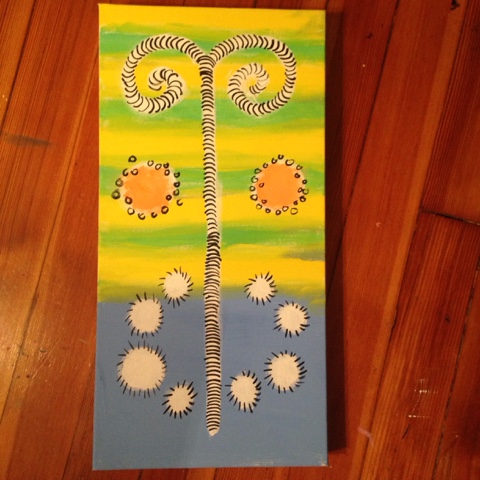 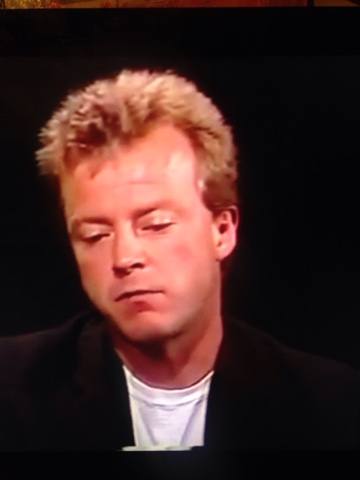 Murdoch Burnett was about as famous as a Canadian artist, poet, film maker or writer could be. Which for a lot of people in the arts just simply does not pay the bills or provide a strong sense of support or comfort during the creative risk-taking practice of making art in Canada. Murdoch reached the limit that a poet can reach professionally in Canada, short of the next stratosphere of artists like Leonard Cohen or Joni Mitchell or Neil Young who sell their work in an international U.S. based market. Nope, the rest of artistic Canadians are lucky if they can get a grant, or a regular job, or teach somewhere to pay for their crafts and materials and rent. And most of them are not household names to other Canadians.

I fist met Murdoch when I was a teen I co-owned, cooked and served  in a vegetarian restaurant in Calgary, Alberta. I will always remember the first time I saw Murdoch up close. It was at a party, down the street in the hip neighborhood our restaurant was located, on 10th Street where all 2 dozen of the punks, drunks, hippies, poets, artists and musicians lived or worked. At this party Murdoch was sitting crossed-legged and reading his poetry. He had really long straight blonde hair and he looked like a Z-Boy surfer from LA. He was absolutely gorgeous. There wasn't a girl who met him back then who didn't fall instantly in lust with him. And Murdoch took full advantage of this, and his wonderful stories of sex, drugs and rock and roll would captivate his friends in the years to come.

The next time I saw Murdoch was in Victoria B.C when he and his band of poet pirates, the Penny Dreadfuls, were performing on a terrible rainy night. I lived in Victoria and I found out what hotel they were staying at and I left them a few bottles of booze as a surprise and gift when they checked in. That night we all got together and Murdoch and I stayed up and shot the shit, long after everyone went to bed. That night formed a weird, karmic, wonderful and difficult on again off again friendship for the next ten years. My grandfather, who lived in Calgary, got very sick, and so I stayed with my grandparents for a few months which put Murdoch and I in the same city at the same time for a quite a while. Murdoch was suffering from several broken relationships and he and I spent a lot of time with my grandparents and driving though Alberta talking about poetry. There was a lot of drinking and smoking. As much as Murdoch loved poetry he loved drinking and smoking. Murdoch and my ailing grandfather forged a fascinating connection with each other. Both heavy drinkers and smokers they had a great time sharing their follies. It's a time of old highways, prairies, vodka road pops, my grandmothers good cooking and Murdochs terrible pain suddenly shifting into some of the best belly laughs and fun I've ever had. One of my best memories is watching the Academy Awards with him as we were both Oscar fanatics and loved awards shows. I've never known anyone else who loved awards shows like I did.

In some ways Murdoch and I were frenemies. Maybe I shouldn't even feel like I have the authority to write an obit for him. I know I disappointed him many times over the years. I can hear him right now saying I better write a bloodless tribute or shut the fuck up. I can hear him say "Don't be shy about describing how beautiful I was". You know, we used to have crazy arguments. And you know he made me laugh. Once we had an argument about a song. He insisted that the old Jann Arden song "Insensitive" was written about him. I remember just choking with laughter and saying even if it was, don't tell people that....it makes it all the more possible. You shouldn't be conceited about being a schmuck. But, you know, Murdoch really was such a sexy classic bad boy it wouldn't be surprising if that song really was written about him. He deserves to be famous, even if for being a bad boy. The thing is, there is a line in that song that goes "I'm one of the chosen few who went ahead and fell for you" and when it comes to Murdoch, there no chosen few. Maybe chosen hundreds. When he was on his game, when he was reading a poem, or commanding a kitchen party, or researching literature, or chasing women, there were no chosen few. Maybe chosen hundreds. There were only people who could fall hopelessly in love with him.  He was a lady killer and story teller unparalleled.

Murdoch was one of the most charming, funny, talented, gorgeous, intelligent well-read people I've ever known. His kindness to my grandparents despite his own insecurities and suffering will always be so valuable to me. And I am so grateful for all the arguments and jokes and laughs we had. He had met my father on a number of occasions and the two of them were oil and water although they had listening to the blues in common. Murdoch had quite a tongue and he could make you laugh with his bitchiness, He once described me, in writing no less, as redoubtable. I've never been called a tough dame so fancy before or since. And he made me cry with laughter once about my dad. He said of my dad "Your dad loves the blues, but the blues don't love him".

Murdoch, you were so cool. The blues loved you, maybe just a little too much. 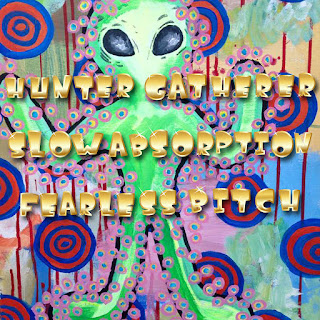 I've got a dvd compilation set coming out near the end of October. The dvd is a selection of four short films I've made. Inside the dvd are liner notes by Prof. John Vanderheide, some cool stickers and a "Candy Minx World Peace Reading List". The reading list is about 40 books that are amazing, paradigm shift, change the world stuff. If you want to pre-order a dvd you could click on the PayPal button on the scroll bar of this blog. Order up a dvd and I'll mail it to you soon. The dvd are $11 for pre-order. 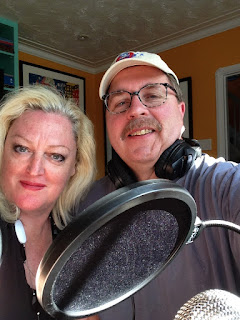 Above is a photo of Eugene Knapik and I in Toronto. Eugene interviewed me about some of the books on my world peace reading list. You can listen to that interview here:

I can remember how to hyper link on my blog! So you'll have to copy and paste to listen to interview...sorry about that...
Posted by Candy Minx at 10:53 4 comments: 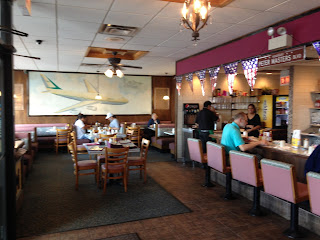 Great family diner, Masters Pancake House, 5265 S. Cicero Ave. We had to get some things tweaked on the car and Stagg and I walked around a neighborhood neither of us had visited before called Archer Heights. Super cute near Archer and Cicero. 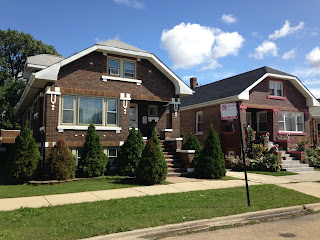 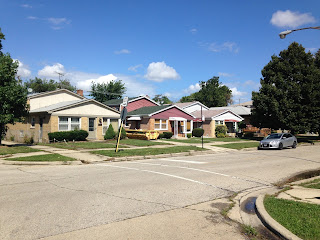 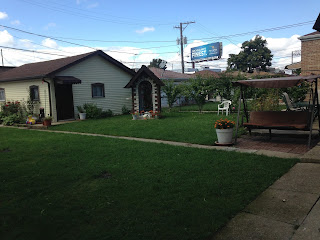 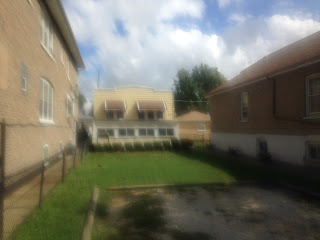 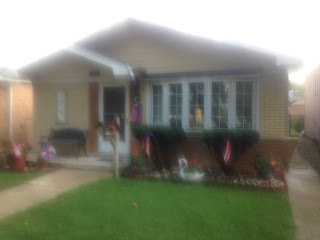 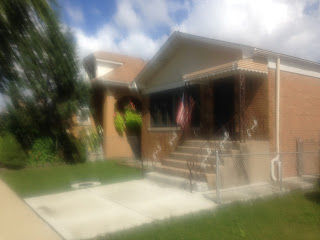 So many crazy errands to do. Got plate sticker done and that is good. Yesterday I saw an accident. No one hurt. I was second on the scene as the young mother pulled her baby out of the car. Car hit side rail right by 31st Street. Four tailgaters and I ran to her car. I got the mum and baby a blanket to wrap around them. And a teddy bear out of her car for the baby. We unloaded her car once we saw she was okay. These football fans were amazing. So attendant to the mum. We all waited till the rescue trams arrive and the tow truck. I refused to leave her side. The guys told her not to be afraid and just when the cops come to just answer their questions. Find out of the baby needs to go to hospital. We never said anything out loud...and I don't want to project onto other people something I was thinking to myself...there was no way in hell I was leaving that young mum and her baby on the Lake Shore Drive at 31st Street. The cops talked to us, they asked me what I saw and then said I was free to go. I took a good long look at the cop, and I said, I'm staying for moral support. I looked him hard in the eye. The football guys had left earlier and I told them I would get her home if I had to. The tow truck came, the cops talked to the the young mum, the driver. Another cop said I could go and I said no I'm going to at least drive her off this highway after the car is towed. The two fire trucks blocked my car from the oncoming traffic until we all go safely into my car with the car seat. The second cop looked at my plates and said, "Uh, you know you're expired here?" I said "I know, I'm getting emissions test tomorrow morning and sticker after". He said, "Just wanted to let you know". Then the tree of us drove off...and I took her home. No way I was leaving a young black woman alone with cops. And thats the world we live in. I always say hi to cops. After all...I am one of their employers. We pay their wages and we should be friendly to people we hire. We should watch their activity since we pay their wages. Think about it. I don't know if I will ever recover from Sandra Blands murder....but I know what to do about it. Watch our community. Go forward humble and compassionate. ‪#‎BlackLivesMatter‬
Posted by Candy Minx at 22:52 4 comments: 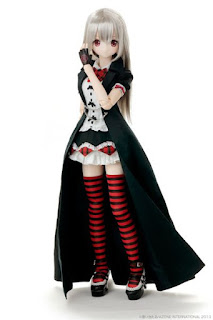 I've been selling 3D Moodstruck Mascara for a few months and I love doing this work. I posted some pictures from the recent cosmetics conference I attended here in Chicago, scroll down. I meet a lot of great people and I love seeing how mindblown folks are when they try this mascara. It's not false eyelashes, but actual mascara. 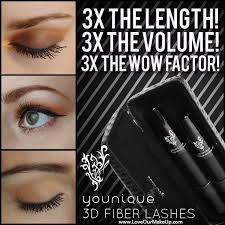 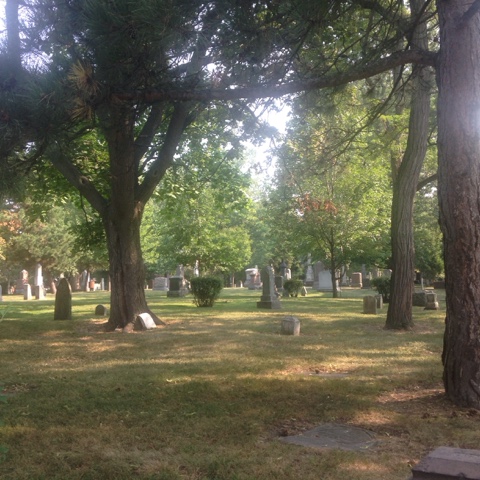 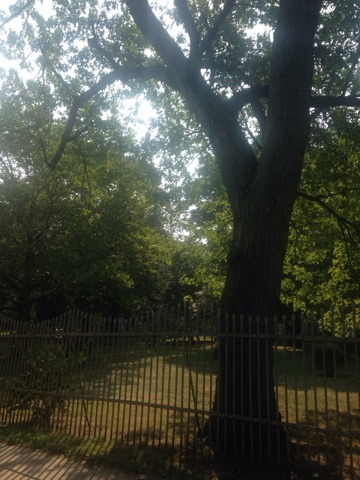 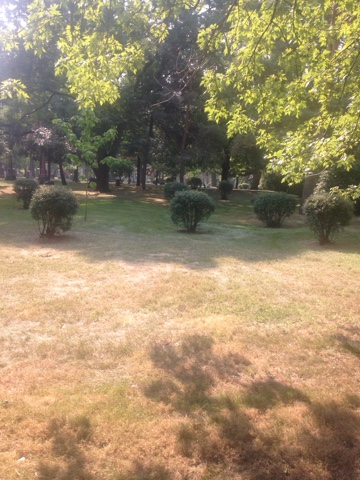 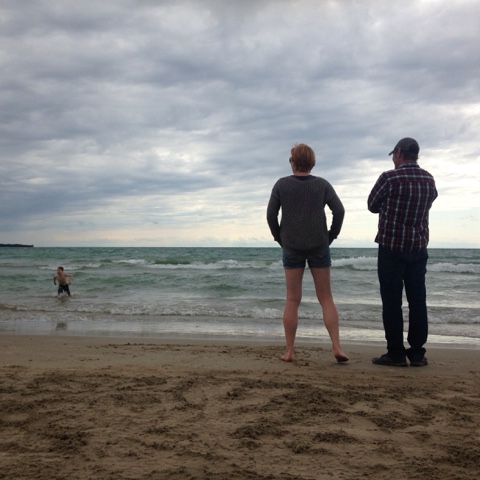 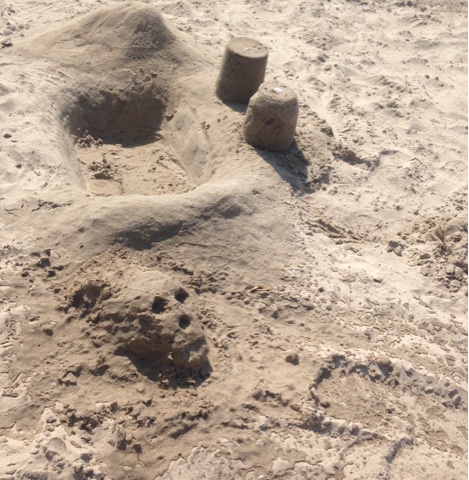 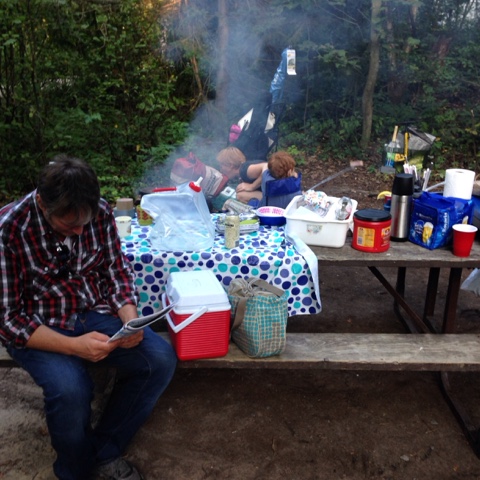 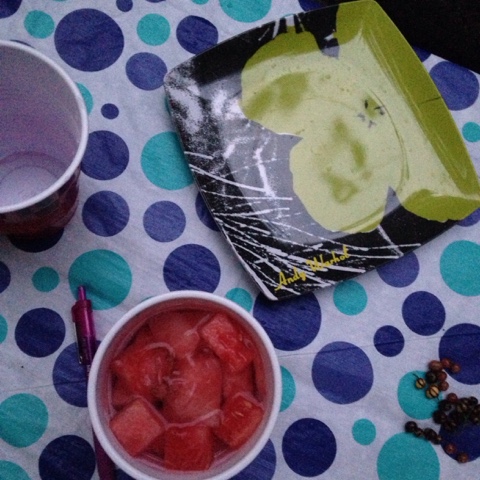 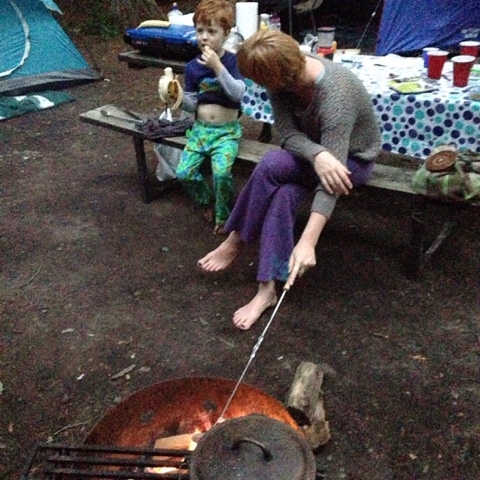 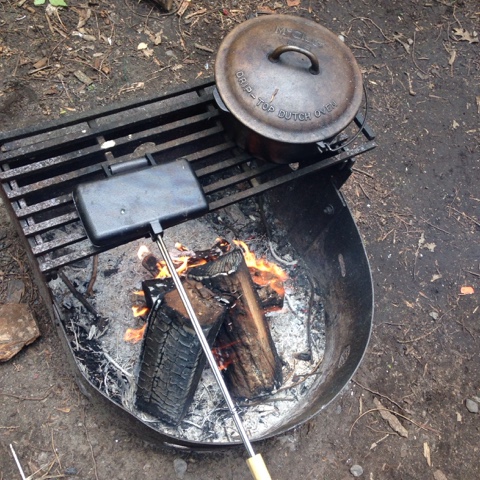 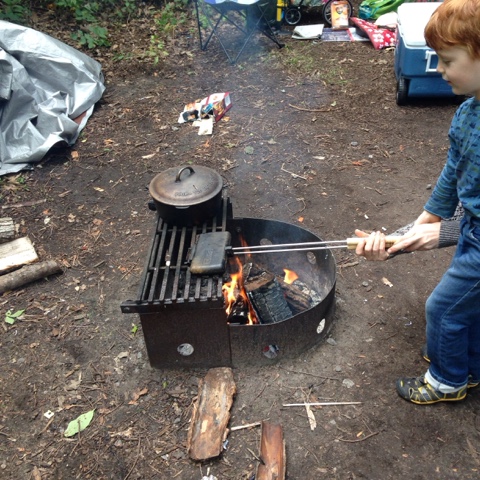