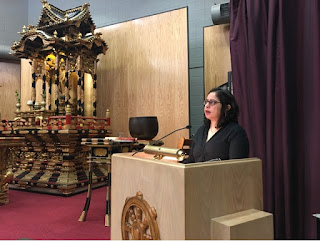 Dr. Shabana Mir was a guest speaker for Interfaith Sunday Service at the Buddhist Temple of Chicago yesterday. Dr. Mir visited the temple from the American Islamic College and she told some very good stories and shared her personal narrative of being Muslim. One story she told was so insightful and puts perspective on how culture changes. She told us about an uncle of hers who moved to South Carloina from Pakistan in the 1950's. Her uncle, who everyone called Mo, was a tennis player and everyone knew him as the "brown guy who played tennis". Her Uncle Mo became interested in a woman he met and he wanted to date her. Since it was the 1950's Mo wanted too be very respectful so he went to the girls parents and asked to speak to them and have their permission to date their daughter. Mo meets with the girls mother who asks him questions. She asks, "What religion are you?" Mo answers, "Muslim." The mother says, "What's that?" and so Mo briefly explains his faith and ...the mother says, "So you're not Catholic?" "No" says Mo. The girls mother says, "Okay you can date my daughter." Part of this delightful story was to demonstrate how fluid religion is and how relationships and attitudes to religion change depending not on religion or faith, but on our various cultures and our culture's beliefs. Dr. Mir was very thoughtful and a charming speaker bringing anthropology and her own personal life into her lecture.
Posted by Candy Minx at 17:38

Thank you for the love!