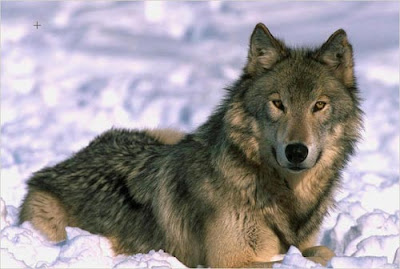 "If there is such a thing as karma, let's hope Sarah Palin comes back as a wolf that gets shot at from a plane"Bill Maher

Last year, 172 scientists signed a letter to Palin, expressing concern about the lack of science behind the state's wolf-killing operation. According to the scientists, state officials set population objectives for moose and caribou based on "unattainable, unsustainable historically high populations." As a result, the "inadequately designed predator control programs" threatened the long-term health of both the ungulate and wolf populations. The scientists concluded with a plea to Palin to consider the conservation of wolves and bears "on an equal basis with the goal of producing more ungulates for hunters." Salon Magazine

I thought you said Palin was a "feminist icon"?

Are you for her or against her? Which is it? Your continued contradictory infantile opinions are unenlightened.

Well, maybe you didn't read the post I wrote about "feminist icons".

Probably no one disliked Margeret Thatcher more than me. She made my skin crawl. She was an embarassment to women, politicians, and one of the most totalitarian wolves in sheep clothing...in fact...I earlier made a joke that in a photo with Reagan...she was the one on the left of photo (because they were indistinguishable to me)...

And Sarah Palin reminds me of my feelings I had for M. Thatcher. But they are both feminists icons. (she was pretty funny on SNL though...and I think Plain also says many things that a lot of people relate to)

I don't care what Sarah Palin looks like, I don't care if she is "intelligent" or went to college or is sophisticated or not...I care what a politician believes in and their ethics. Palins' ethics on wildlife appall me. I take umbrage with her lack of understanding about nature.

I don't blog to seek approval...I blog to think, daydream and stay in contact with friends and family miles away.

Anonymous, why don't you go fuck off?

Dear "anonymous"
That's a large amount of bullshit 50 cent words to be tossing about. perhaps you should save your money for a set of testicles.

from: some people should get a hobby!

Wow, I just read your response to Anon... you told them! It's clear that they missed the point. It would be funny if Bill Maher's karmic wish came true.

I have been meaning to stop over and say congratulations to you and Stagg. I thought there was a post about your wedding, but I can't seem to find it.

By the way, I just gave you an award.

I guess I see it as if they arent hurting you why shoot them????? They are beautiful animals and they deserve to be in the wild where they belong unless they are attacking you or hurting your live stock or some thing in that general order.

It sounds like you woke up on the wrong side of the bed. Its either that or it sounds like there is something seriously wrong with you.

They shoot wolves in Alaska, and they ship them into Wyoming... because they had shot too many of them there. Hmmm.

I think I am finally rested Candy!

Ok, I just re-read my post...I didn't mean they ship the shot wolves into Wyoming, I mean they ship live ones in because they shot so many that the deer population was out of control...or something like that.

Wow, that was succinct(speaking of 50 cent words).

Perhaps I am not all that rested.