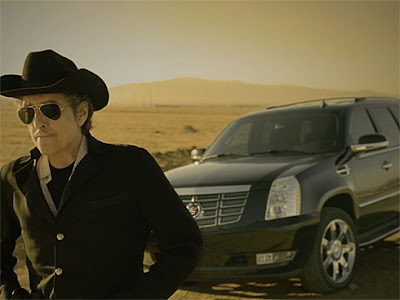 We got a bunch of magazines from a friend for our collages...and I've been catching up on the ones I haven't read. I posted something about Bob Dylan's SUV ad last year and found this story about the idea in Rolling Stone Nov. 2007.

Bob Dylan is driving an Escalade down a dusty desert highway. He stops at a crossroads, steps out and contemplates his options. In a voiceover, the singer aks,s "What's life without the occasional detour?" The question, from a new Cadillac commercial, is an appropriate one for Dylan, whose recent detours have included an appearance on Dharma and Greg and an ad for Victoria's Secret. "What is it specifically that appeals to Bob about these thngs is unknown, " says a source close to Dylan. "He has a history of saying yes to things you wouldn't expect."

The Cadilllac ad, which also promotes Dylan's XM show Theme Time Radio Home, came about when Dylan began putting together the October 24th episode, which had a Cadillac theme-and includes songs like Dizzy Gillespie's "Swing Low, Sweet Cadillac." XM suggested Cadillac sponsor the show, and Dylan (who has owned several Caddies over the years) agreed. "It hearkens back to classic radio, where it was always "Buick presents the blah-blah show." says the Dylan source. "It immediately appealed to Bob." When Cadillac's ad agency, Modernista, heard Dylan was also willing to appear in a TV ad, it constructed a simple script. Dylan had requirements: he wouldn't speak on camera, he would wear his own clothes, and he didn't want his music to be used. The agency considered using Depeche Mode's "Personal Jesus" before settling on the atmospheric 1999 track "Held" by Smog.

The spot was shot on a broiling day in the California desert. "It's a 120 degrees, and he's wearing black pants, black coat, a hat, gloves, and he wasn't sweating at all." says scriptwriter Dave Weist. "And he wanted no air conditioning. As soon as the doors would open, the whole crew would basically just fall out. He would just kind of casually walk out like 'Hey, what's the problem, man'?"