I pretty much was so busy all weekend I forgot to take pictures. We had a yard sale on Saturday and although it was a lot of work it was also a blast. Our friend Andy came to town, thank god, and helped us on Saturday. Stagg and I had made all kinds of signs and flyers...which I even took downtown to the business offices and such...like Merill Lynch....we were selling a lot of art and I was hoping someone might buy something for their office. We put up flyers all around our hood at record stores and coffee shops etc. We had priced things the night before then woke up saround 5:30 on Saturday to get details organized then later move stuff out to the front. At 8a.m. some shit phoned the landlord and complained. (see remember what William Burroughs said about shits and Johnsons? A shit is someone who can't mind their own business!) Anyways...I had run to the store and the landlord yelled at Stagg and was gonna cancel our yard sale. He thought someone was moving out the front door and was gonna give us a fine (nice world huh?). Anyways, he said "Just this once" (isn't it sick that unless you own a house someone thinks they can tell you how to live...especially in this poor recession...telling artists they can't try to sell their work. The landlord is lucky I was at the store.) Yoou know, we tolerate a lot of crap from our neighbours. We have two neighbours Stompy McFooty (who tramps across her floor with the worlds deadest weight prod at midnight, 2 a.m. and 5:30 a.m.) We have Bombing ForPeace (who plays computer games at full volume all night...and cusses when he isn't saving the world) And some psycho who vaccuums at 7:30 on sunday mornings. I would never call the landlord on these folks even though they are inconsiderate. Ya just cope. I just wonder what kind of an asshole would freak out about a yard sale. Oh well.

We had a great time. We met all kinds of neighbours and heard all kinds of stories and histories about the neighbourhood! And guess what? Remember the reporter I said earlier who had interviewed us downtown at the Indigent Persons Memorial? He walked by! What a coincidence! He lives near us and here is his profile. I had to go to volunteer work to help some girlfriends ...so Andy and Stagg were working the room from 10-2 and they sold lots of Stagg's art work! I was amazed when I got back home how much stuff they had sold, even one of my paintings!

Later after we tidied up we had a Cookout in Pilsen. Our friends Brooke and Tony had the most awesome bbq and lots of friendly neighbours and good food. Amazingly Stagg and I managed to visit and stay awake on the train ride home. This was like the craziest busy Saturday but a lot of fun! Here are the only pics I took...during the walk from the El train to the Cookout: 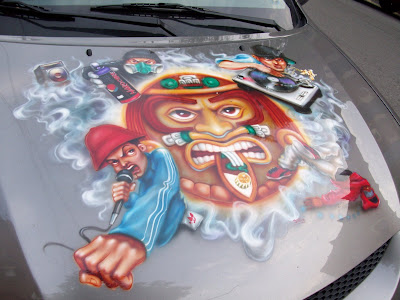 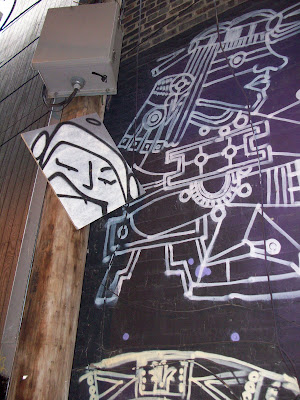 Interesting art - !! None of this in suburbia :(

Ah - apartments - I love the names you have for some of the tenants, LOL....I can't stand renting....I can pretty honestly say I never had one good experience with it - well, maybe one - we had a great landlord in one house here, but then I remodeled a kitchen for him, and then wallpapered his kitchen in his home - we made improvements and kept the yard up. At the end he had the nerve to keep our deposit. But at least he wasn't letting himself in and stealing my panties or telling us how to live.

Glad you had a successful sale - yard sales are kind of fun! I'm debating on one, the garage looks kind of like a landfill - - - would be nice to be able to see what we really do have "stored" out there

Gardenia, go for it! You will feel so good to have cleared out some of the "cobwebs". And you'll make a few bucks too!

hmmm...have you read of my harassment charges at work? Talk about idiots...