The Most Popular Artist In America 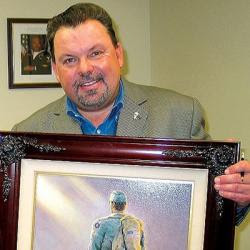 From The New Republic, a book review by Jed Perl...

THE LOVE AFFAIR between the intellectuals and the trashmeisters, now more than a hundred years old, has just overtaken the man who is by some measures the most popular painter in America. Thomas Kinkade: The Artist in the Mall is an essay collection that exudes a creepy fascination. While a number of the contributors manage to provide level-headed assessments of Kinkade’s place in the American imagination, I am not remotely convinced that such attention should be lavished on Kinkade’s sugar-drenched Middle America, with its frosted gingerbread domiciles, dew-kissed old-fashioned small-town Main Streets, and farmlands so fertile they look as if they’re on steroids. Alexis L. Boylan, who edited the book, would no doubt protest that the size of Kinkade’s reputation justifies the attention on sociological or cultural grounds, pure and simple. I know that many intellectuals believe we overlook middlebrow tastes at our own risk. But there is a large dose of reverse snobbery threaded through this collection. More than a generation after Pop Art became holy writ, it is rather tiresome to be announcing yet again that we live in a democracy where one person’s treasure is another person’s trailer trash, and that their masterworks are not necessarily inferior to the Picasso’s and Matisse’s in our museums. Many of the contributors to Boylan’s anthology want to devour every last bite of their middlebrow cake, but only after each tasty morsel has been skewered on a highbrow fork. The problem is not that they respect Kincade anthropologically, it is that they respect him as an artist.
Posted by Candy Minx at 11:07

I've pawned my highbrow fork for a Wu-tang sword !!

I suppose writing about somebody who is as tremendously popular as "The Painter of Light" is one way to enjoy a taste of that popularity.

I loved this, Candy! One of my favorite subjects, Thomas Kinkade. Of course you are absolutely right. This is a fraud being perpetrated on bozos who probably deserve it.

In the interest of full disclosure, I, too, wrote about him not too long ago and took the position that I had made peace with him. Unfortunately, I did not put my tongue far enough into my cheek, and some people took me seriously:

Well, my thoughts on Kincade after being tempted into some snobbery about his work - my snobbery - I gave into wishing I was making the deposits into my bank account that he probably makes. I have to give it to him - being a master of marketing as well. And....on the positive side again - perhaps he is selling a dream - a dream of nostalgia for a softer, gentler United States that we wish we could perhaps gather around and sing Christmas Carols outside the glowing windows - and forget the poverty, the pain of creation, the rapes by the oil barons, the wars, the thievery of our government, the colonialism, the people crying in the streets - just for a while....a short while....