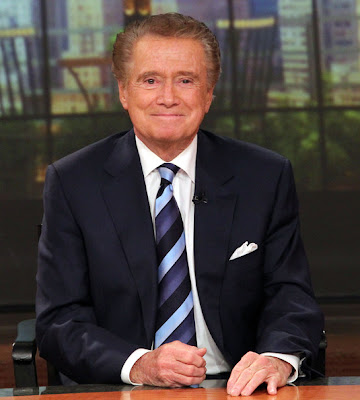 I've been watching Regis every morning for years and years. I used to get teased about it from my friends. I first saw Regis Philbin in the mornings when I was in New York City in the 80's. I thought the local tv morning show was the best thing. I used to watch it with coffee staying with friends in Manhattan during my "club days". When his show got syndicated in Canada I was so excited and just worked my day around the show.

The opening segment of host chat was live. In the 1980's there were very very few shows of live tv and the excitement of their chit chat being live was huge for me. It just felt so real. Unscripted, and most of the dialogue was about their personal lives. Original reality tv.

I record the show now...but still the best way to watch it is when its on the fly as it happens. I've watched it even if I am working, or on a road trip. I find it online or record it. I am having a very weird feeling that Regis will no longer be on the morning show. It just feels so weird to anticipate this change. At first when he announced he was leaving the program I was pretty upset. I thought he shouldn't. But in the last few weeks I've really enjoyed all the extra interviews and coverage and accolades people have been giving Regis. I'm glad he has gotten to hear people say they appreciate him and to say best wishes. Regis has been on tv more than any other person. He's broken Guinness records with almost 17,000 hours on tv.

Every episode last week I cried. I was a wreck even though there was still a whole other week coming. this week the tone has been more happy and silly and I have hardly cried at all. I sure hope he takes another job. I've always felt watching the show has kept me leveled out. (there has been some study that the amount of eye contact and/or social time between primates in the morning affects their sleep and mood-see chart below from Seth Roberts) 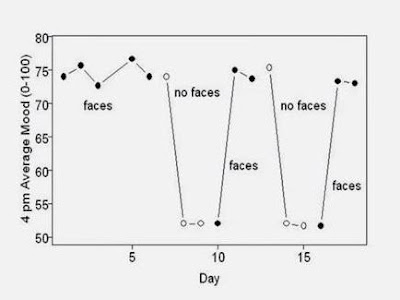 Watching Regis has always been my little taste of New York City. His brusque and crazy manner has reminded me of so many people I have known from there and the general spirit of the city. I'll still watch the show with Kelly Ripa and whoever they hire to co-host with her by next year...but it just won't be the same.

The show coming up tomorrow morning is going to be his last morning hosting position. I've got a box of tissue ready.
Posted by Candy Minx at 21:49

Wow, you've got a lot invested in this...tissues and all! I think I've maybe seen him on television once or twice, but that's about it. But then again, I didn't see a single episode of Seinfeld until after the run was over.

I hope the last show is a good one.

Well, when I'm into something I'm really into it. All or nuttin. It's over thirty years I've been watching this morning talk show. It's been interesting to see the response of media to Regis leaving his show. This was a show that got bad reviews when it started and it's "low brow" to a lot of people. Now he's moving....he got interviewed on NPR this week. Fancypants people are now suddenly taking notice of Regis's career...and its nice to see him get some different attention.

Regis is a great entertainer. I saw him on letterman sometime in the last year. You know how letterman is very into his "wealthy man" persona? He was trying to draw Regis out a bit, because Regis has done pretty well for himself, but I think is much more quiet about it than letterman. Anyway, they make a bet about the view from the Brooklyn bridge. Pretty entertaining. I also remember seeing Norm MacDonald on Live and thinking how funny it was. The morning slot provided an interesting back drop for guests who came out with shocking stuff.