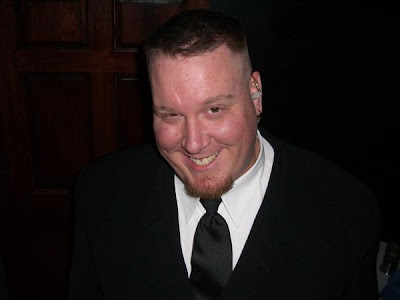 The only thing I can make any sense over this sudden loss is that Jim Morrison and Kurt Cobain must have needed a bodyguard.

The Neil, as he was called by just about everyone, was a Marine. Just exactly how cool was he? He had tattoos. He wore combat boots and five fingers shoes. He got his sister, my friend Tricia, her first iPhone and kept upgrading them. He was one cool brother. He had just got his concealed weapons permit and was planning to branch out from security to personal security. He drove a bad ass truck. He worked at a gentlemans club and took care of the dancers like they were family. He was the life of the party and he laughed loud and hearty. He was huge, larger than life at 6'5". He had a massive love of travel and seeing the world especially if the weather was balmy and there were palm trees. He could quote The Simpsons on a dime. Knowing The Simpsons is a sign of great mental health and well-being. He loved movies and was a source of useless information which made for great conversation. His favourite movie was The Big Lebowski. Almost all of his clothes were black and glamorous styling...and when they weren't they were black with skull and pirate motifs, which of course is also glamorous! He was a foodie getting his parents to try new foods they never imagined they would begin to love. He did it all and he lived so large and to the fullest: sky diving, scuba diving, gun savvy, knife collecting, massive hat wearing, camping, hunting. He really was the best version of the American spirit we see in movies and literature. Only for real. He seized the day.

He's going to be interned on Saturday in his five fingered sports shoes with two pounds of Reeses Peanut Butter Cups. Semper Fi!

You make me dance like a fool
Forget how to breathe
Shine like gold
Buzz like a bee
Just the thought of you can drive me wild
Oh, you make me smile"

oh my goodness. this is terrrible. i was in a car accident yesterday. Nov 30th, 2011. That is terrible. I walked away all shook up and this friend of yours lost a loved one.. I am crying again because of this. i feel hopeless and lost. I hope they can find it in there hearts to heal and remember the good things about this brother and friend. Nik.

Awwww. So sorry. So very sorry. This is a guy I could fall in love with, at the very least, just Love for the heck of it.