Mary Petrie and Mr. Bean, Or The Week Day In Pictures 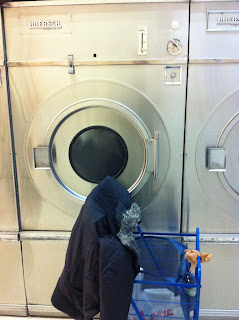 I spend a lot of time at the laundry mat. And now Stagg has been pitching in and one of us is at the lanundry mat just about every other day. It was very nice having a washer and dryer at Grandmas...but it's back to the laundry mat now that we have moved. Our local laundy mat is remarkable. All the machines function with a relationship rather intense to humans. You basically have to "Fonsie" the machines. Remember how Fonsie used to fix the jukebox? That's us at the laundry mat...techniques I basically learned from the very kind and hardworking people who own and run the place. Tapping, banging, finger prodding and McGyvering are all part of the experience of getting the wasj clean. And now I just save time...copy what the owners did when a machine goes AWOL...and on with the show. You can also do some serious shopping at our laundry mat. Socks, belts, jewelry, candy, chocolate bars, tamales...all make their way through the building if you are there long enough by bootlegging vendors. Quite remarkable. 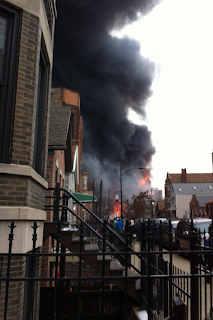 I received the above photo from my landlady the other day at work. It was a factory fire half a bloc from our place. The photo is taken by a neighbour who texted it to my landlady who then texted it to me. I must tell you it was a terribly fire...and both Stagg and I are glad we were out working that day and missed all the action. We've had enough fire for a lifetime
. 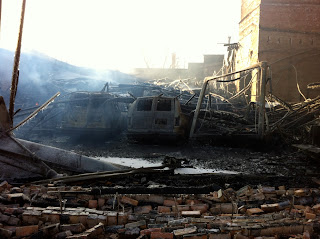 But of course...I still crept around the site the next morning to see what happened...and there were still flames on top and in the rubble... 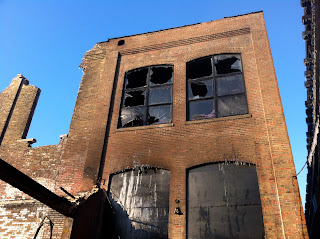 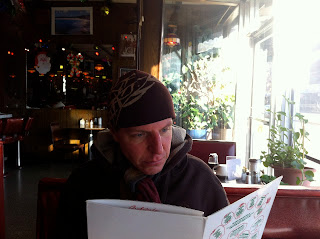 Then Stagg and I returned to the diner near the Buddhist Temple before we went to Dharma Class on Sunday. I love diners and there seems to be less and less of them. Just look at that lovely plate...it's so cool. And red hot rod booths. We had feta cheese omelets and they were divine. 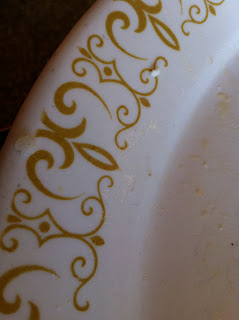 So we get to temple...and what a day. first we went to a service with speakers, chanting and koans read aloud. Then a couple of members got married...and they had a 400 year old bow and arrow ceremony demonstration. Wow, this guy was awesome...and believe me it was cold outside! 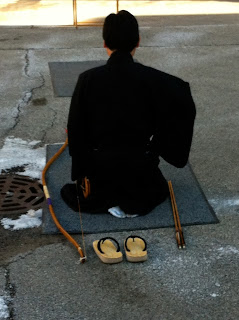 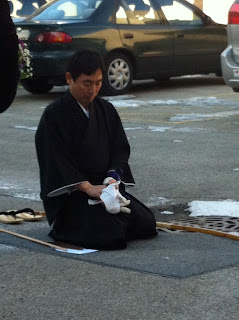 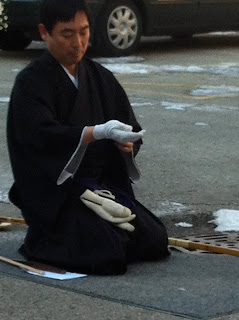 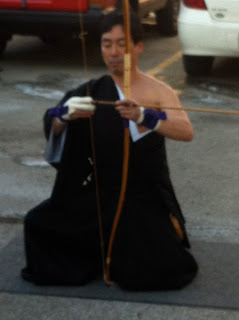 Then we went to Dharma Class. Fairly interesting...with discussions about violence in society...some more quotes from Buddhists and a fight broke out! I've been a Buddhist for most of my life...and a little known fact is that Buddhists often have quite rambunctious arguments!!! It's kind of scary and kind of hilarious. There are some groups of Buddhists whose sacred practice includes arguments! ou actually can learn a lot about philosophy, the nature of reality and life by arguing. And there are good discussions and not so good. the one we witnessed was a little nasty. A curmudgeon situation actually. We did laugh about it later. Poor Stagg here is his introduction to the Dharma path and he witnesses tow cranky men get into a silly petty fight. Ha!!! Very exciting!

Last night I made a BBq of all kinds of vegies and two steaks...I put way too much lighter fluid on the coals and everything tasted like gasoline. I ate yogurt but Stagg said it tasted great to him. Earlier in the week...I was walking along Cermak and a family was coming up the sidewalk. Right as I got close to them I see all these fabrics and clothes on the ground. As I am right beside the family I realize "oh shot, that's our clothes!" I start picking up my underwear, Stagg's boxers, socks, t-shirts. The family looks at me like I am LOCO...I try to explain "these are my clothes...my husband is doing laundry".
Posted by Candy Minx at 12:14