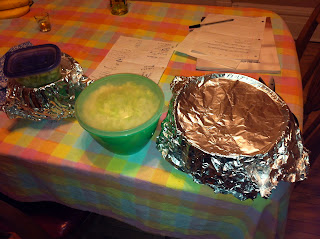 Pretty much every week I chop up a lot of onions and celery for the following weeks cooking. It's a mass reduction thing...just as easy to chop up three onions for one meal as it is to chop up ten for several meals. One day I thought I would delegate to Stagg to do some "sous chef" work and chop up some vegies for us while I was at work. I kind of over estimated and left him WAY too many onions to chop...but I had already gone to work. Stagg chopped and chopped. He had to stop to have a nap and let his eyes stop watering...and then he chopped some more. When I got hme from work I could smell onions out on the street. 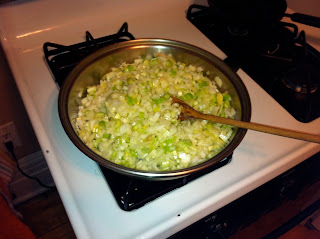 Then the next day I ran into the landlord as he entered the front door saying "I still smell onions!". He didn't know I was coming out the door into the hall...and I said oh jeez...I got too many onions chopped last night. He said he woke up at 2 in the morning and said to his wife...I smell onions. Oops...yes I bet you did! 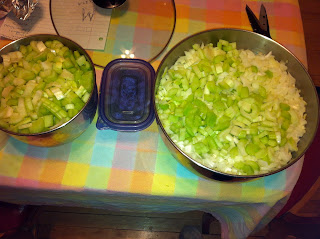 Anyways I was able to make all kinds of stews and foods with these great volume of celery and onions. Thanks Stagg!
Posted by Candy Minx at 21:13

Helpful info. Fortunate me I found your web site accidentally, and I'm shocked why this coincidence did not happened earlier! I bookmarked it.