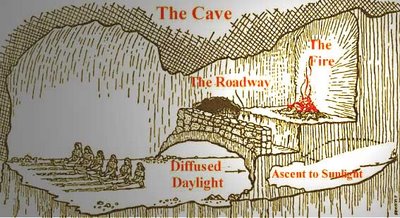 Drawing of Plato's Cave.
Ride The High Country is one of my favourite movies. It was made in 1962 by Sam Peckenpah and it would make a wonderful double bill with Butch Cassidy and The Sundance Kid. Although, I was crying so hard during Ride The High Country, I'm not sure my eyes would be able to handle both twilight westerns at the same time. Wanna know what made me onion eyed? These very lines here: "Let's meet 'em half way -- head on. Same as always." I swear, just typing them here, makes me tear up.
Online Script for movie. 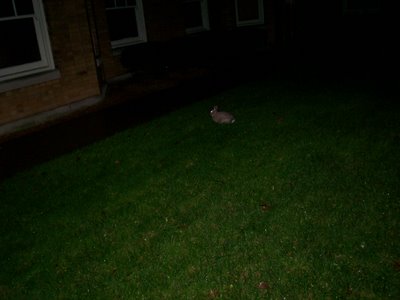 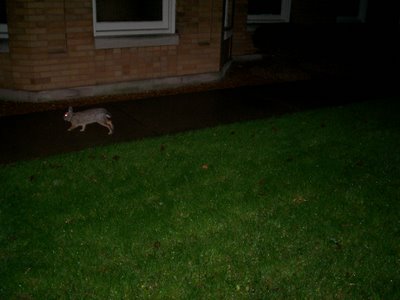 Last night we went to a local library that was featuring a philosophy lecture. It was so much fun. The topic was From Plato's Cave to Neo. There were about 60 people at the lecture and the speaker teaches philosophy at a nearby adult education facility. She was very charming and before we got there we were wondering what will this be like, obviously joking about all the shut-ins and fellow geeks that would be there. Yep, we were a nerdy geeked up bunch(mostly males, duh!)...it was a really fun lecture and way to spend an evening. The instuctor walked us through the seven classic phases of all quests, teachings,religions and philosophy stages of learning. All teachings and denominations have the same structures for enlightenment/knowledge and she used several scenes from the first Matrix movie to demonstrate these stages. Platos' Cave is a fabulous metaphor for understanding our processes in becoming fully able and practiced animals. (how fun to find a rabbit in our courtyard after discussing falling down the rabbit hole!)

The gist of Plato's Cave is that imagine a group of people chained inside a deep cave. They are all facing a wall in the cave and can see shadows and sillouettes. People moving walking and their casts are to the people chained on the floor for their whole lives, the definition of life.

What happenes if one of the prisoners gets moving and becomes loose? They Walk around the cave towards the entrance/exit, and find a burning fire. On the other side of the fire are actual bodies and other people. The prisoner realizes that the shadows they had seen all their life were actually an illusion, not the real world and not the full life experience. What next?

By discussing the allegory of Plato's Cave interspersed with a few scenes from The Matrix, which used Plato's allegory in it's premise and structure, the instructor made a list of phases the awakening prisoner to life passes through.

The most intensive discussion regarded the first phase of CONTROL. Maintaining control occurs because change is uncomfortable and frightening, for many reasons. Some of which include, feeling fear, not fitting in. It is painful to realize what we thought was life and people was actually shadows on a wall. This scares us because we feel what we were taught and what we know is slipping away, painful because we feel we were deluded, and because we feel foolish and stupid for being fooled bya false perspective on reality and the nature of life. The truth can be painful. We encounter different forces. Impedeing factors: prevent us from going through the stages. Awakening factors: things that speed up our self awareness. The instructor shows examples within the movie Matrix of Neo (new) having fear as underlying his sense of responsibility, the urge to return to the familiar is strong, just as it is for most humans experiencing change and facing new knowledge and learning.

This was just such a fun event and we even found a few new tidbits about The Matrix we didn't notice, it is such a strong visual and philosophical set piece, and it is really holding up to time passing. (Stagg and I watched all three movies on the weekend to prepare for this library lecture, and because we are supergeeks. He had never seen the sequels) Some other interesting notes from the evening: The INSTRUCTION stage of change incorporates failure and mistakes( when Neo falls instead of jumping to the building first time he attempts). We see him wanting things to be a specific way for fear of change. Attachemnt to past lifestyle for same reasons. The variety of numbers appearing within the movie. Room 303 may indicate the tradition of number 3 within so many cultures as a highly spiritual or important number. The word courage is associated with INVESTIGATION stage. The Latin word courage is using the root cour=heart. So to practice to become skilled at something one must use the heart, bravery to take the risks involved, and to "know thyself" is the stage of MASTERY. And finally, once one has attained skills, one is confident and the final stage is to help others by performing service.

I found the instructors break down of the facets of learning very cool, and their universal application with all practices, from religion, to sports, to technical virtuousity, spiritual quests, music and art.

One of her main arguments was that more and more philosophy was being incorporated into daily life and many social structures. Basically, the mainstream has been benefiting from philosophy and accepting it's personal and social importance.
Do you think there is a limit to INVESTIGATION and MASTERY in one's life?

The Allegory of The Cave

I would love to hear this lecture. Very interesting. And, I have to agree with it all! I really liked all the Matrix movies.

Thanks for your kind words regarding my FIL!

Well slap my ass and call me kermit! I love coming to your blog Candy. Dare I ask if you have a book recommendation associated with your post?

Nancy, it was a lot of fun, good to keep the juices flowing ya know?

Karen, of course there is a book recommended...Plato's Republic. It's funny, most people might associate reading about the allergory of the cave as a university project, but I wonder is there ever a time when we don't want a new challenge or to test ourselves. People tend to assume once they turn 21 or 25 they are "grown up" fully formed.

I think it's significant that the characters in The Matrix are in their 30's and 40's suggesting we are never too old to challenge ourselves with a new bit of knowledge or research. Isn't life a series of testing if we are in one cave or another?

No, I think if people are truly alive in their minds, there is never a limit to investigation and mastery. I see facets of my life in your relating of the lecture, going by my brain like a film.

In fact right now, I have found the "niche" where I have placed myself and my expectations where a part of the process you mention. Now its time for a hard look at reality and moving higher. (hopefully :))

Candy Minx, Thanks for your words. Once I get out of this office (Friday night), I might take you up on your offer and email/chat.

Very interesting lecture! I had heard of Plato's Cave, but didn't know exactly what it was. Thanks for clearing it up for me!
Thanks for visiting my TT.

Oh, what a fascinating way to spend an evening! I'm a bit surprised by the assertion that philosophy is being incorporated into daily life--I'll probably be trying to find examples all day.

never heard of that! very interesting

And yes, the weekend after Thanksgiving are generally time to put up the christmas tree. :) At least here in the US.

Ok, I've read Plato's Republic...why don't I remember any of this?

How interesting! I learnt a lot - thanks for sharing!

that drawing of Plato's cave looks alot like the basement of my friend's condo!

Control? As a cat, I'm all about control! However it is a fascinating topic.

Thanks for stopping by!

I love the bunnies.

How cool that she made a subject as daunting as philosophy relatable by comparing it with The Matrix! (I would still have been lost, though, having seen the first one under duresse, sleeping through the second one, having never seen the third.)

I read this blog entry just after I was discussing some aspects of the Matrix with some friends. It being full of metaphor and philosophy. (because all 3 of them were just on TV)
Anyway, I would enjoy a lecture on the subject. Pretty cool.
And No, I don't think there is any limit to Investigation and Mastery in one's life.