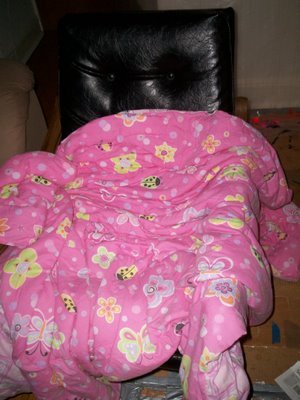 This is where I start out in the morning with tea or coffee and a bunch of recorded tv programs. 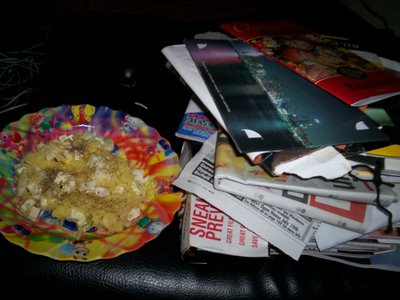 Breakfast and tv while I catch up on all the magazines around the apartment. We use them for collage...and I like to read the articles or select images I really like. Breakfast? Tofu, squash and cabbage all mixed up. I like oddball foods I guess. It's delicious. Below are some tiny cut outs of words. 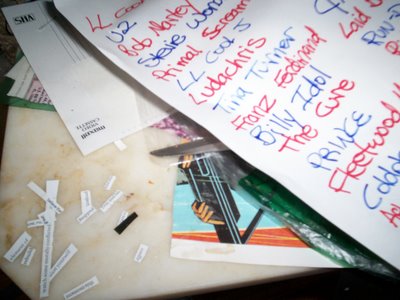 The little cut out words ended up on some postcards. Some of the cut out words include: "conducted", "pudding", "element of", "a second", "surveying", "you dust yourself", t"his moment", "distance", "waving", "project", "watch some morally conflicted" and "someone."I make these post cards while I'm painting and then put my blog address on the other side and leave them around places. Like coffee shops, record stores, bars. I'm a nerd. 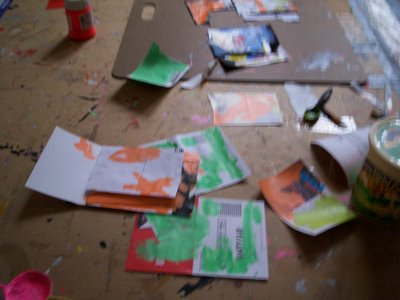 This is what they look like before, above and after, below. 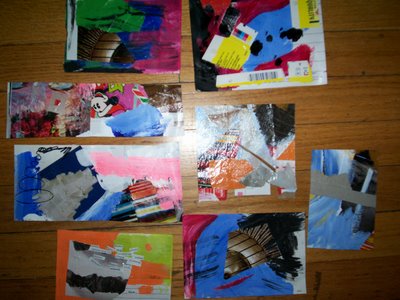 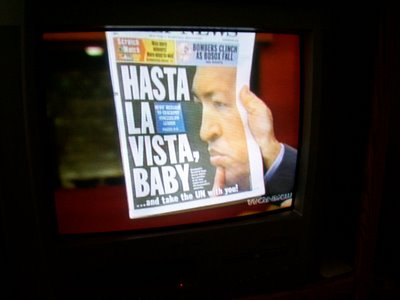 I watch Regis and Kelly every day. Regis often holds up the morning paper. 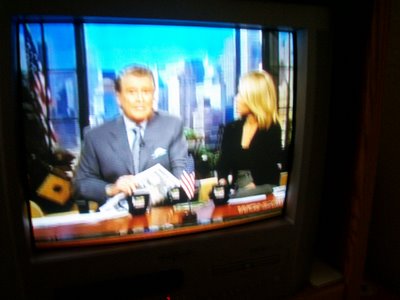 It is unusual for me to just sit and watch tv in the day...usually I'll be working on something while following some show. When I get into painting, I usually blast music really loud. 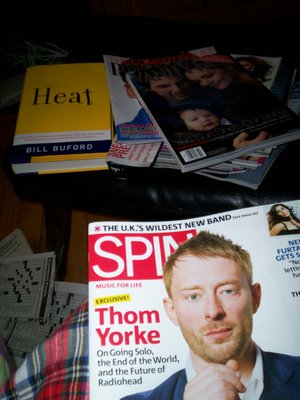 I watched Hugh Laurie on The Actor's Studio. Love this program, I record it when there is a favourite actor featured. Often the actors are asked questions about their techniques and about their childhood and their history of work is explored. These are my favourite celebrity interviews because they are so technical, and not cult of personality style of questions. Laurie stars in tv show House, and was asked how tv was treated when he was growing up. "Television was rather frowned upon. Television was for other people. Catholics." 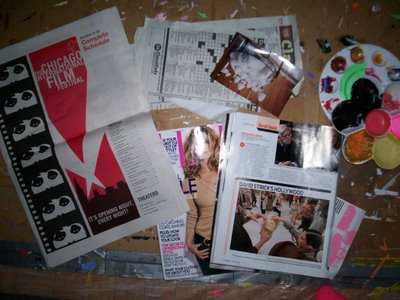 I took some of these pictures a few days ago while watching a documentary about serial killers in movies. It was called Murder By Numbers and suggested that the viewer is often referenced throughout many of this genres content,even suggesting we are culpable.
1960's-3 films
1970's-10 films
1980's-45 films
1990's-107 films
with serial killers as characters. 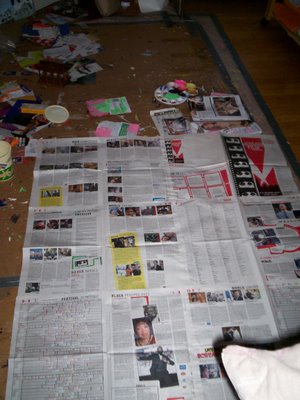 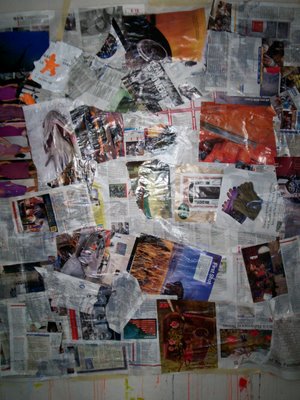 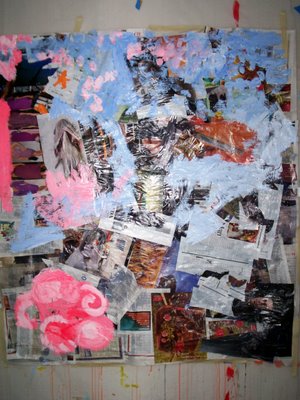 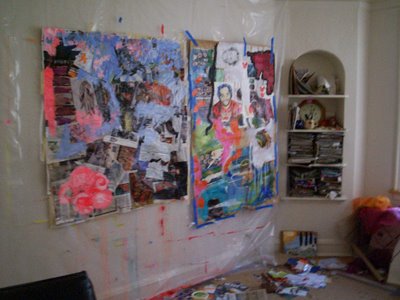 Now that the basic background is made I move the new painting next to portrait of Sean in my work space. Perhaps I'll have these finished as a celebration to mark my 300th post? I'm at 298 at this posting. 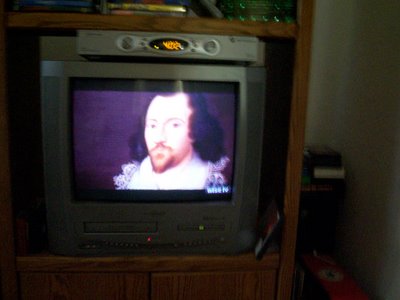 While working I am listening to this recorded series In Search of Shakespeare. Michael Woods and BBC produced this detective mystery style of telling about Shakespeares secret life. I've watched this once before and I have a book version I received as a gift from a British online bookclub pal. It's really fantastic and the premise is that Shakespeares family were Catholics practicing secretly in Elizabeths religious wartime England. It was a time of terrorism and intolerance and Shakespeares many layers of references and storytelling may be from his secret Catholic lessons and from a provincial education that has not ever been accomplished since for other children. For example, Shakespeares and his peers education included memorizing Ovid and reading Latin versions of Plato, at age nine. 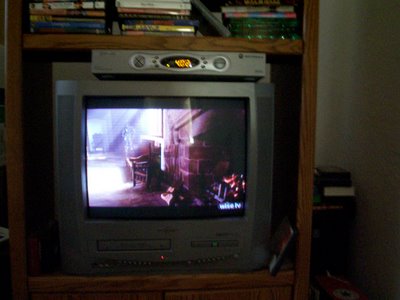 (love the new Thom Yorke album by the way, if only for the song where he goes 'this is fucked up' over and over in the chorus)

Great post, Candy. It's fab to get an insigth into your day and your creative processes. That documentary sounds really interesting.

I see you finally managed to get your hands on a copy of the Suri Cruise Vanity Fair!

And what a fab post, Candy. It makes me want to spend a day with you!

(But I might bring my own breakfast... or maybe we can get your sister to come too, and she can bake me some lovely bread. Then we can start arguing about wheat and Frankenfoods, then you'll kick me out of your house and I'll be left alone and scared on the mean streets of Chicago. Hmm... this is nor a very nice scenario! Okay, for the sake of peace, I'll share the cabbage with you!)

What a wonderful creative person you are!

Being a serial killer movie buff, it was interesting to read your statistics.

i love tofu--my favorite meal is broccoli and tofu stirfried.

and sounds a lot like my day--except I watch The daily show and colbert show and when you start cutting and pasting I'm jotting notes down on little slips of paper, and in notebooks, staring blankly out the window. (When we moved I found scores of these little notes tucked into coats and boxes and folders.)

the life of an artist is the funniest thing--so much seems to be spent in idle pursuits that are really just the foundation of the finished painting/book/song etc.

Hey Shep, thanks. I haven't heard the new Thom Yorke yet, I am curious.

*, yes, this isn't the fanciest documentary...but the people interviewed, including David Fincher! were very articulate and thoughtful. They discussed the camera work in Henry:POASK at length and each critic seemed very well versed in film language and voyeurism.

Yes, Red, got the Suri Vanity Fair...but it was a fairly minimal story with the photos, but the pics were awesome. Some jiucy articles too. I do have some strange days, I kind of am like some constantly moving creature. Often there is a huge pot of onions saute-ing while I'm working. I am addicted to doing about ten things at once. You caneat whatever you like. I don't usually eat squash and tofu for breakfast...who knows...but most of the time, yogurt and berries. Stagg has a toaster here...you can hang out and you two can eat toast!

Diana, good you are eating tofu, we have it for a meal twice a week. It tastes awesome ina curry sauce, and I also always make it with olive oil, tamari, dash cayenne and tons of garlic sauted.

Minerva Jane...did you see your name was a search engine keyword that someone found my blog? Funny huh? Yes, yes to tofu! And being an artist is a weird life it's true. I like to believe I am normal and blend...but I kind a know that I really do have weird pace and drive. Yes, I am always busy, but I also have the vibe of being a slacker...somehow I look relaxed while I multi-task...and I break down painting as 1 percetn talent, 20 percent training and then a huge portion of time, staring and thinking(reading, dreaming...etc)

i miss painting, thank you for sharing this!!

That was a fabulous post! You're so damn creative and fun!!

Cabbage??? You can have ALLLLLLLL of mine. Tofu too.