It's more than here.

Ah, the smell of the bag of chips, a leatherette easy chair and a digital video recording device. (Okay, I'm on a diet, so no bag of chips. Besides they are food from the evil empire of farming)

Here are some odds and ends in no particular order...WARNING! I'm just going to ramble and gush.

LIVE with Regis and Kelly. Yes, I am a devotee of this program. Been watching it for Eek! over twenty years. I am long over justifying my addiction. Yep, scanty clad goth chick hooked on Regis. Regis is the living link to the Rat Pack. I love Harry Connick Jr, and I've seen Michael Buble perform a dozen in small cigar bar in Vancouver before he was famous...but they are post-modern versions of the Rat Pack. Regis actually worked with Joey Bishop, and the Rat Pack were his idols when he was young. This show keeps me in a New York state of mind. I am often asked "Who Do You Like More?" I answer "Kelly, because she is a professional actor, is funny, and since she has been on the show a lot more stars have been guests." Plus I relate to her more. Kathie Lee was fine, she put out some good laughs over the years, but I didn't have an affinity for her like I feel for Kelly. And most important, apparently, Kathie Lee Gifford did not like Madonna. Kelly loves Madonna, and since she has been a host, Madonna, Bruce Willis, Robert De Niro and Jack Nicholson have participated. ( I don't know if this is true, but the rumour was that Giffords born again attitude turned off several stars). Yesterday, the hosts played a tribute to Steve Irwin, who had been a guest and a substitute co-host over the years. It was very well done.

Steve Irwins family has refused the offer of a State Funeral. His father said Steve always knew the danger of his environmental and educational work, and he was a ordinary guy and would not have wanted a State Funeral. I was very impressed. He made a statement that he always wanted the cameras to be rolling. He didn't care if a crocadile was chewing on him, keep the cameras rolling. He could accept that if he died on camera he would go out saying "Oh Crikey". Who can't get onion-eyed about that elan vital?

A Nice Viewish Girl. Rosie hits the small screen again. And she is HOT. Her debut on The View yesterday brought such a fresh energy to the show. She has a down to earth, common sense kind of humour. I watched her show regularily and it always brought a smile to the day. She gave awaya cruise. She got flowers from Tom Cruise, and said, "Even though we disagree about medication I still love him" And she said she is still taking her anti-depressants. Some marriages may be based on love, but the couple bring out the worst in each other. I think that was the case with the past nine years of The View. If today and yesterdays shows are any gauge then this is a marriage that will bring out the best in these four women. Already they seem lighter, funnier and happier than past seasons. Happy tenth year ladies of The View.

Today on all the morning news and talk shows, the photos of Tom Cruise and Katie Holmes baby Suri, in Vanity Fair. I am so running out and picking up a copy. The baby is real and gorgeous!

Cate Blancett is cast as a young Bob Dylan. Others cast to play him in various periods of his life in Todd Hayne's new production are Adrien Brody, Julianne Moore,Richard Gere, Colin Farrell. and Charlotte Gainsbourg. How wicked is that?

Studio 60 on the Sunset Strip. Genius Aaron Sorkin: The West Wing. Apparently he took shrooms to write. Matthew Perry and Bradley Whitford. How can this go wrong?

I have caught up with recorded past episodes of Rockstar/Supernova and Project Runway. I taped Top Chef for Mister Anchovy and Tuffy P and it is so good I landed up watching the whole thing again. Both Project Runway and Top Chef are from the same producers, and these shows deliver. Not just back stabbing but talented people backstabbing. I love the clothes on Project Runway, and I feel like cooking and eating with Top Chef. I think either Magni or Toby is going to win Rockstar/Supernova. I only noticed last night that the show is created by Mark Burnett of Survivor. Survivor premieres next week. Apparently the two tribes are being divided by skin colour. ( I have heard people talking about this controversy and they keep saying the tribes are divided by race...? WTF? I do not know what I find more disturbing or against my ethics and sense of good science...that the producers have decided to divide by skin colour or their bad education about race? Still, it's Survivor and hopefully, like it's history of being a gay friendly public forum...perhaps someone with some brains will point out on tv that there is no such thing as race. ( I love the graphics on this site, drag your mouse over the tattoos, kewl!)

NFL Season! I grew up with football on the tv around our house. Went to some college games. Four years ago at a bar I worked at, I joined the "for fun" football pool. I adopted the Phiadelphia Eagles as my team to study and root to win. I started reading up about football and made a scarp book. Yes, a scrap book. There is something wrong with me, I know. I researched what's a corner back, what's a nickel back. I don't have a clue right now what either of those mean. This year...Eagles all the WAY!!!!( Stagg and I might try to go to game when the Bears play the Eagles yipee) 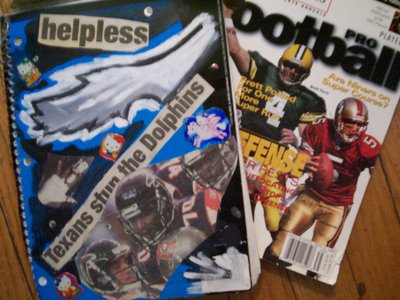 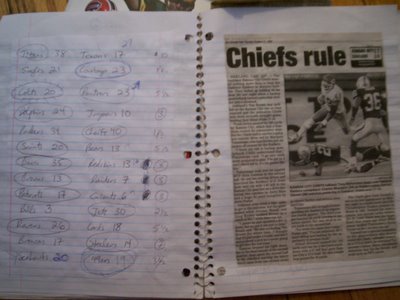 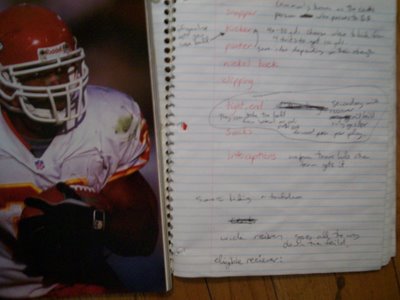 Grey's Anatomy. Like every other fan of this incredible show...I am on the edge of my seat to find out...Does Dr. Burke ever perform surgery again? (only a fan would get this: the real cliffhanger of the show is which guy is Grey gonna choose?)

The Wire. This is THE BEST SHOW ON TV. Check out the video clip called Ball Of Confusion<. What a trailer and a what a great version of this song. If you have not seen The Wire...go now to your local rental shop and get WIRED!

House. It's Hugh Laurie. Premiered last night. Awesome. I also watched him on The Actors Studio.

I am also super excited for CSI Las Vegas and Dancing With The Stars. I am giddy in fact.

Rosie O Donnell to Joely Fisher. "So, you had your baby at home? Naturally?" Joely, "Yes" Rosie, " I adopted my children and I had an epidural."
Posted by Candy Minx at 11:16

Life will never, never, never be the same without Steve Irwin. Crazy, nuts, fascinating, and lovable. His love for the creatures of the world, even the unlovable ones will live forever. I'll miss that whispering love song to his creatures that lured us as viewers into his world for a little while.

Personally I'm a Viking fan myself.

We don't get so many of these programmes here... can you believe we don't even get Survivor? We usually ask our friends in Australia to tape it for us, then when we receive the tape we watch six or seven hours of Probst in one sitting!

Baby Suri is gorgeous, isn't she? She is a mini-Holmes for sure!

A nickle-back is a bad Canadian band that keeps winning juno awards.

The casting on the Weird-Bob movie is fitting. Heard the new album yet?

It's weird that we have such didfferent schedules for programs...and hey isn't Mark Burnett a former British special ops soldier beofre he created the Eco-Challenge then awesome Survivor?

I bet you can get The Wire over there Red and *, I really recommend it. I was gonna record some some stuff and send a dvd or two to you...but Stagg says you have a completely different system than we do. This makes me nuts!

The bay suri is gorgeous. i forgot to pick up my Vanity Fair yesterday...must get it shortly after I finisn massive amounts of housework...

Hey Diane, you're right about Steve irwin, I kind of think people just got used to him, and his untimely death has highlighted the kind of public service he performed.

Miste rAnchovy, I haven't heard the new album yet, but I LOVE his iPod commercial. Slick. His album just went number one this week. How remarkable. I am very intriqued by this movie and the casting, love it. Glad you found your way to read this, I've been waiting to see your response!