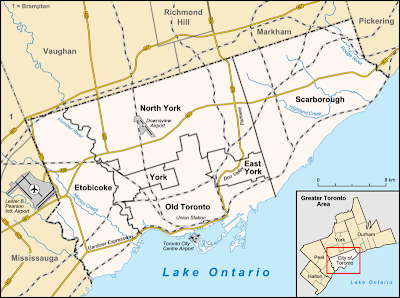 You see the problem really stems from people have such different needs to get by in their daily life.

A lot of the challenges Toronto faces are because of the way certain neighbourhoods were designed. The design controls the mindsets of the residents.

So far...the residents of certain neighbourhoods are not free-thinkers. They are under the mind-control of their street designs.

Toronto has a mayoral election coming up and unfortunately it will be two different cultures trying to hash out the votes. So far there are three main guys in the running to become mayor. Two of them are suburban sensitive, therefore they are going to try and run their campaign on the selfish interests of car drivers. (now listen before you start crying, I like to drive cars too. But you shouldn't vote with your car. You should vote with a community sense. No. I'm serious. Don't vote like a selfish bastard. Vote like a citizen: for your whole city. You know, "The common good"). One of the other potential candidates is coming from a urban-sensitive mindset.

Even though a bunch of assholes tried to forcefeed a "megacity"on suburban Toronto...the suburban folks don't actually live within the same designs and patterns as the people in the old city limits. It's so cliche but the issues really do come down to apples and oranges. Suburban structured streets have emphasis on cars. Fair enough. But it's not common sense to try to apply that sensibility to an urban structured area.

It's as if the people who live within the former city limits or "old Toronto" are speaking a completely different language than those who live in the former outer limits of the city(Scarborough, Etobicoke and North York...see map above). Nothing changed about the design of the suburbs. They are still suburban streets with no corner stores, or coffee shops and storefronts. They are still stretched out streets with wide open unpopulated areas where crime can flourish. And"old Toronto" is still an urban design. The needs of "old Toronto" haven't changed.

What Toronto would really benefit from is accepting that two mayors would make more sense. One for "old Toronto" and one for "old suburbs". Oh wait...right, that's exactly how it was before assholes decided to make it "megacity".

It's not even the guys running for mayors fault that they sound like jerks. And they do sound like jerks. They can't help it...they are trying to win cheap. Instead of actually accepting what the challenges are to the city of Toronto, they are going to try to cash in by appealing to the suburbs (yes the areas outside of "old toronto" that everyone pretends is just like the downtown)


The thing is...at least a couple of the mayoral candidates will be trying to lay blame on public transit and run their campaign against public transit. This is very cheap, counter-productive reasoning only aimed at winning an election. The suburbs are going to elect one of these backward thinking guys.

I suppose it doesn't matter because what really happens with humans is that we function as a swarm. The swarm follows natural selection and urban centers are the best form of survival for our dominant economy. The swarm ultimately chooses urban design. More and more of the swarm will move into "old Toronto" as it is too expensive and dangerous to live in the "suburbs". Humans don't have to legislate survival and cost-effective moves like we will see as people move to "old Toronto". It won't matter what the mayor candidates say about public transit. We will spend more and make it more fantastic as more and more people move downtown to survive. We don't need mayors for that.


Toronto has the opportunity to keep preparing for the future by spending lots of money on public transit right now. Or Toronto can wait...until the swarm moves downtown again...and then play catch-up.

Gee, it really sucks watching a good city act like an idiot.
Posted by Candy Minx at 10:42

is there a strong auto lobby there?

Mike, in Canada our jobs are the trickle down from U.S. Canada used to be inventive and innovative but for the last 40 years we do whatever U.S. tells us to do. Some of the assholes say in Toronto have a fetish and it's called "world class"...like little dick syndrome or something. Big dicks run Toronto including the tiny bit of auto industry.

In the last 15 years I think there was only one auto company opened in Canada (for Honda). The auto industry in Canada has been tied to U.S. since the 60's. The mindset is very similar between the two countries. I can't remember the exact percentage but somethng like %10 of jobs in Canada are related to the auto industry which is mainly located in Ontario. Car sales jumped up last year making it a record year in sales. Apparently 2010 is expected to beat that almost record year.

So...yes, there is a strong auto lobby in Canada especially in Ontario. There is also major problems because the U.S. held companies pay good union wages but companies like Honda do not pay their employees as well. This means the unions are slowly losing their stance and are underminded by jerks like our Prime Minister and the Ontario Liberal leader. These creeps put all kinds of pressure and turn down restructuring plans in order to overthrow the unions.

So the auto business is so messed up and people supporting it just add to the lack of restructuring. I guess the rise in car sales last year at least helps the government since they bailed out Canada auto plants last year just like U.S. did...ergh!!!!

It's true. When I moved from Toronto proper to the "former Etobicoke" I lost the ability to speak English and to think freely. I succumbed completely to mind control. Even as I struggle for freedom of thought, I can't evade the powerful mind-control drugs released into the water at the innocent looking water filtration plant three blocks over.

Even so, I agree that the way we have Toronto and the "GTA" organized politically doesn't work very well at all. Amalgamation might well have been a good chunk of the problem. The fact that most of our Councillors are actually Zombies is notwithstanding. Not even candidates who claim to be "ready" like the boss of the TTC can save us. What will we do?

The first thing I hope for is for more sitting councillors to run for Mayor. That way we'll have more room for some fresh blood on City Council, and I think that would be healthy for the City.

Next we need some candidates for Mayor. Do we have any yet? I recall a quote from the late Utah Phillips, that went something like, "If God had wanted us to vote, she would have given us candidates".

But vote I will. I'm determined to participate. If I concentrate on my big toe intently enough, I may be able to combat the mind control...but who will I vote for? Ohhhh Noooooooo....I don'ttttt knowwwwwwww.

You're not alone Mr. Anchovy, don't take it personally. It's not like just the people in "North York" are being mind controlled. The people who live in "old Toronto" are influenced by their street designs every bit as much as those in the amalgamated city. Amalgamation was on paper only and satisfied the powermad Mel Lastman ...no one else. Many of us tried very hard to reject the amalgamation...predicting the very split concerning finances and distribution that existed among the self interested neighbourhoods as not being resolved by a "megacity". My point was that voting is only valuable if citizens vote for the common good rather than self interest.

Meanwhile...nature will take care of the situation as economic forces unconsciously move the swarms around. Natural selection isn't a conscious decision. Most of the ways we live has nothing to do with our so-called free wills...we are the subjects of what will give us the most life for our buck.

I don't see any good candidates right now. But, I would look for a candidate whose priority was on seeing beyond old programs and whose vision included high speed trains and new subway lines and lots of public transit.

Mayors should organize paying the bills. We don't need them to tell us how to live or how to move or to label our neighbourhoods as "megacity". Mayors should make sure there is lots of money being spent on public transit and options for low cost housing. Otherwise they are basically useless.

Being a cynical old fart...

I don't believe anyone (well most anyone) gives a shit.

Most everyone wants enough to get by and maybe a bit to save and go on holiday and have a few night's out etc etc etc.

Most couldn't give a toss who's running the show - nationally or locally - as long as they're ok for the above.

Four Dinners, I agree completely. And that is why I think we have lost perspecive about politicians and their roles for us. We think tehey are supposed to do something for us...when we will naturally want the best for our friends and family. They should just worry about paying the bills so all people can have a comfortable life for their friends and family.