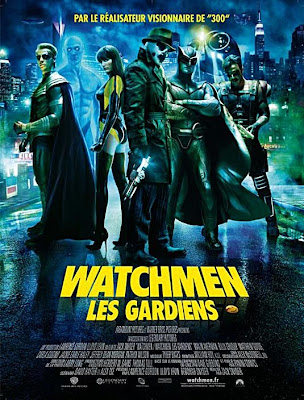 I don't know what's wrong with me, but I really wasn't hyped about Watchmen. I usually get pretty excited about comic book movies, but I have gotten a little blase about them lately, maybe afraid of seeing a stinker... don't know. I loved the graphic novel Watchmen it was huge in the 80's and I collected comic books and such back then including Watchmen, Maus and Tank Girl etc etc. Somehow Watchmen movie just slipped by me. So landed up watching this weekend and I really loved it. Same director as 300 so I should have known better. I wish I had seen it in the theatre, it was so beautiful. What's extra special is it totally feels liek a grown up comic book, no measly kids or sugar powdered sex scenes. In fact, the sex scene is really cool. I totally loved all the actors cast and went and looked them up on google today. I was like who is this woman playjng Silk? I loved her! What an outfit! (she's Swedish-Canadian yea!) My only consolation for being such a loser and not seeing this in the theatre is that there is a directors cut with an extra 24 minutes. Imustfindnow. The filmmakers did such an amazing job with bringing this to the big screen twenty years later, and especially without compromising the dark sick stuff. A true gem. The actrors are incredible. I couldn't take my eyes off Rorschack. He was amazing and his body work in fight scenes and in general conveying his character through his body (since a fir bit of the movie he has a mask on) was mindblowing.I loved Silk's work too and whatever this actor did to fight and move was excellent. She seemed painted and alive all at once. The opening sequences are crazy good. Totally preparing the viewer for this new history of the world.I never would have believed I would say this, but this movie is mostly fantastic because of the casting! These are excellent performers perfectly cast. Combined with a relatively intense storyline (really hard to find in comic book adaptations) and ultraviolence, slick cinematography, perfect set direction...this is a movie to watch on a snowy afternoon when you just don't want to do anything else but snack on vegies and 5 layer bean dip and enter a parallel world. Zack Snyder you are a god!
Posted by Candy Minx at 13:14

It was stunning on the IMAX...also, it should be on my blog somewhere

yeah I found it. I wish I had seen your rec to go to iMax. darn.

Four Dinners, I think you'll really like it. Just for how it looks is worth your time, but it's a fairly good capture of how it feels to read the comic. It brought me right back to the time I read it.