My first apartment was down the street from my dad and step-mum. I had flown the nest but not too far away. The apartment was in a very old "character" building in downtown Calgary. We lived just by 17th Avenue and 8th Street. The last time I drove by both my step-mum's old place and my old place they were still painted wth the same colours my family had chosen a long time ago. I have a few friends who helped paint that house and they have noticed the same interesting fact that any new owners have maintained that house colour. Anyways...I lived about a block from their place. One day I was doing yoga in my Danskin jazzercise body suit when the police pounded on my door. Apprarently my next door neightbour had tried to kill himself by shooting a rifle into his gas stove. The cops looking me up and down once in my yoga costume then asked to look in my closet for the bullets that went through the neighbours walls into my clothes. I didn't even notice. I was a very thick and slow teenager. Never even heard the gunshots. I did not tell my step-mum this story or she would have got me to move back in home. I had this ridiculously small kitchen about the width of the human body and back then I spent all my money on clothes and kitchen supplies. I vaguely remember eating but only on my shift at the local hipster vegetarian restaurant where I was a waitress. I'd eat a salad and carob cashew milkshake once a day. How funny is that? No matter how many tips I made I was always scrambling to pay my rent. Did I mention I spent all my money on clothes and cooking equipment? In this old apartment building I lived in we had shared washroom accomdation, which completely grosses me out now that I look back. Yuck. But I would haul my towel and a caddy of hair products and cleansing products down the hall in my robe for a bath. I always cleaned out the tub before I used it. One day an elderly couple across the hall asked me to help them do some errand they were having trouble with, I often met them in the hallway checking mail...or heading to the shared shower. Tey seemed sweet and I was as I said rather naive and so I went into their apartment to reach something or other for them. I couldn't believe what I saw in their apartment. It was filled to the ceiling with newspapers. The only way I could get to their kitchen was to carefully glide between tall coridors of stacked yellowing newspapers. I had never heard of hoarding before. In fact, being so naive and trusting I assumed they must have some fabulous purpose for keeping all those newspapers. I had no idea it was a mental illness.

Many times over the years since then, I thought about that apartment and that keeping newspapers and I later found out when I took a psychology course that hoarding might be a behaviour of a mental illness and might be related to Obsessive Compulsive Disorder.

Recently A&E started a series called Hoarders and I've been watching it. Sometimes Stagg will watch because it is totally fascinating. Stagg has a tendency to collect things and he makes a lot of artwork out of found stuff collected...and he calls the hoarders his peeps. Sometimes I laugh when he says this, heh heh...but I am the opposite, I like to have everything in a place and a home...even if we have a lot of stuff...I need to know exactly what it is and where. And if we don't need it: goodbye! Not easy. One thing that I really like about the tv show Hoarders is that at first I thought it was about the people who kept everything and filled up their houses. But it's turned out that the tv show is actually about the family of hoarders. Often these people are mystified and co-dependent or have worked really hard to not live in chaos themselves...and sometimes they step in with a psychological team to try and help the hoarder in their family. Heavy shit...and it absolutely seems to tear family apart.

Today we were walking home and from several blocks away we saw guy filling up a huge garbage bin. As we got closer I thought it was a reno job...but then I realized...holy cow, those are all newspapers. Real life hoarder! I couldn't believe it. The house he was hauling all this stuff from was a really beautiful huge house built in the 1940's on a fairly posh street near our apartment. I had to go up to talk to the guy. I said, "My husband and I are really impressed with how hard you are working on this terribly cold day" He says "Yeah, well you gotta take the work if you can." I ask, "Is this all newspapers from that house?" He says, "Yep, and there's lots more." I ask, "Is the owner in the house while you're working?" He says" Yes, and the owner's daughter."

Wow, just like the tv show I thought. I felt so bad for the daughter. One of the things that is obvious in the tv show is that sadly...so many of the hoarders have very little social skills or take pleasure in what most of us experience as a valuable part of our lives with our families. The hoarders choose things over people. Something to think about. I am probably weird but I just had to take a picture of the newspapers in the refuse bin. When we got back home...I noticed a huge pile of things I've got by the door to donate to a church fundraising sale this week. Boy, I can't wait to get them out of the apartment. 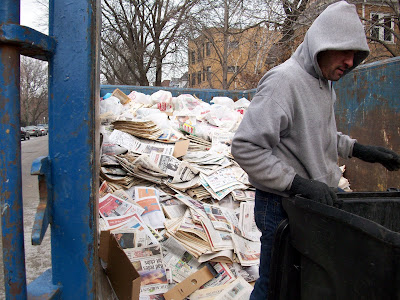 um, how many accordions do you have to have before you're considered a hoarder (I know it's for the public good though. Har!)

Newspapers can stop bullets. What about books? Do they count?

Mister Anchovy, I guess the "rule" of how many accordions is too many is if you can't walk across your kitchen to make a a cup of coffee etc. When they impair your functioning, ha ha. So I'm sure you've still got lots of room to collect more accordions.


I've had many collections myself over the years. I usually was collecting something, and then it would get out of hand...and I would sell it off. Sort of my own home run junk store, heh heh. One of the reasons I am so interested in this program and hoarders is precisely the question, when it it too much and then an addiction ha ha. Stagg and I kind of keep each other in check, but he comes froma family who collects things. It's a fine line between a collection and dysfunction hee hee!

Yes, Bloggerboy, newspapers can block bullets. Sure books count .I used to collect books...but it got crazy. My friends dreaded when I moved because I had jillions of milk crates fllled with books. I'm down to about 1000 books. I try to only keep ones that are reference. Easier said than done. Or really nice looking hardcovers. I also try to put them on shelves colour-co-ordinated. SCARY!

Candy, I LOVED this post, especially the part where we learn more about your earlier life.

I've watched Hoarders a few times..it reminds me of my son's bedroom. :)

I have a hard time watching Hoarders...I feel like with just a bit more, I could end up on there! Any creative ideas for what to do with old old family photographs?

My grandma had a friend who was a hoarder. I loved looking through her stuff. When I worked as a court appointed guardian, it was interesting that many of the elderlies that needed guardianship because of dementia were hoarders. Even clutter drives me crazy - I like space around me, and like you, I like to know exactly where my things are. My daughter's mother in law was a hoarder, hoarded till she couldn't function in her house and moved in with her daughter. She had brand new shoes, dozens of them, new TV's, yet would let her son go without a TV while she had new ones sitting in the mess.