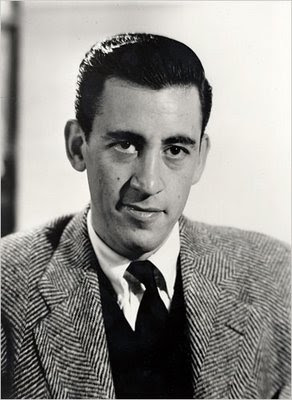 Is it too strong to say that J.D. Salinger saved my life? When I read The Catcher In The Rye I found that life sucked just a little less because Holden Caulfield saw through the phonies and maybe I could try not to be a phony. Maybe I'd fail, but it's a noble aspiration. The novel suggested that friendship is one way to stay out of the mental institute and hey. Staying out in the world with friendships and trying to be well seemed like a damn good plan. Thanks Holden Caulfield.

I've read his books and stories at least a half a dozen times each and Franny and Zooey is my favourite Salinger story. It actually has the best and surely some of the most profound philosophy in a novel. The novel proposes that every person, no matter what kind of an asshole, or jerk, or pretentious, or holy, or gifted is all of us, the Buddha. (possibly disguised as the "Fat Lady") Somehow Salinger managed to make Buddhaconsciousness or Christconsciouness cool. We are all the "Fat Lady" and we all have the option to perform and practice art as well as we can even if it's just for one other person. His characters are some of the coolest heartfelt people in literature. Complex, flawed and trying to be kindhearted. His few published books all seemed to wrestle with how to live kind and thoughtful in a cruel and fucked up society. Franny and Zooey is on my World Peace Reading List. He may only be read by kids these days, but I think this is a good thing...get the kids before they turn into cynical old phonies ha ha.

I once got into a massive competitive discussion early in the 1990's internet of online web boards when I thought that A Nice Day For Bananafish might be the story of a pedophile who couldn't live with themselves. (It's more likely about a war vet who couldn't live with themselves and the superficial society they found themselves in...but I had a strange epiphany and stuck to my guns pissing off some other readers online)

Salinger's character would come alive in their speaking...Everytime I read Salinger's characters I could hear them speaking out loud. They seem as real as anyone in the way he could nail dialogue. Salinger's peers are David Mamet and Quintin Tarantino for gifted dialogues.

Reports say that Salinger passed away at home. I wouldn't have expected anything less. He outwitted the hospital and retirement home and stayed reclusive till the end!

The voice at the other end came through again. "I remember about the fifth time I ever went on 'Wise Child'. I subbed for Walt a few times when he was in a cast-remember when he was in that cast? Anyway, I started bitching one night about the broadcast. Seymour'd told me to shine my shoes just as I was going out the door with Walker. I was furious. The studio audience were morons, and I just damn well wasn't going to shine my shoes for them, I told Seymour.I said, they couldn't see them anyway, where we sat. He said to shine them anyway. He said to shine them for the Fat Lady. I didn't know what the hell he was talking about, but he had a very Seymour look on his face, and so I did it. He never did tell me who the Fat Lady was, but I shined my shoes for the Fat Lady every time I ever went on the air again-all the years you and I were on the program together, if you remember. I don't think I missed more than just a couple of times. This terribly clear, clear picture of the Fat Lady formed in my mind. I had her sitting on this porch all day, swatting flies, with her radio going full-blast from morning till night. I figured the heat was terrible, and she probably had cancer, and-I don't know.Anyway, it seemed goddam clear why Seymour wanted me to shine my shoes when I went on the air. It made sense."

Franny was standing. She was holding the phone with two hands. "He told me, too." she said into the phone. "He told me to be funny for the Fat Lady, once." She released one hand from the phone and placed it, very briefly, on the crown of her head, then went back to holding the phone with both hands. "I didn't ever picture her on a porch, but with very-you know- very thick legs, very veiny. I had her in an awful wicker chair. She had cancer, too, though, and she had the radio going full-blast all day! Mine did, too!"

"Yes, Yes, Yes. All right. Let me tell you something now, buddy...Are you listening?"

"I don't care where an actor acts. It can be in summer stock, it can be over the radio, it can be over television, it can be ina goddam Broadway theatre, complete with the most well-fed, most sunburned-looking audience you can imagine. But I'll tell you one a terrible secret-Are you listening to me? There isn't anyone out there who isn't Seymour's Fat Lady. That includes your Professor Tupper, buddy. And all his goddam cousins by the dozens. There isn't anyone anywhere that isn't Seymour's Fat Lady. Don't you know that? Don't you know that goddam secret yet? And don't you know-listen to me, now-don't you know who that Fat Lady really is?...Ah, buddy. It's Christ Himself. Christ Himself, buddy." From Franny and Zooey

Candy, I thought of you when I heard this because I know how much you loved his works. So did I.

Part of me wishes he hadn't been such a recluse but another part of me admired him for sticking with it.

I didn't even know he was still alive!!!

Thought of you, too. For Esmé with Love and Squalor really hit a nerve with me when I was in high school.

Gosh, being off the news map I do miss some things. Like you I read Catcher the Rye and was very moved by it when I was quite young it was one of a handful of books which really made an impact on me in my teens.

Hey, Harper Lee is still alive as is Bradbury and Roth so we have plenty more giants to diss when Ellis has been long me a bad memory
and wait...Kinky Friedman ain't dead yet and he should count as a giant....something at least.