Are You Ready For Your Transformation, Per se. 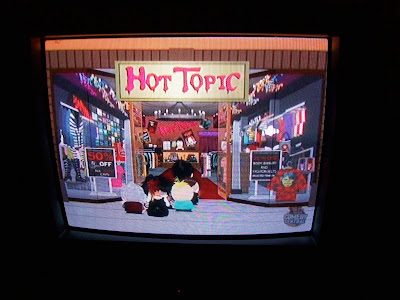 We just caught a South Park episode we hadn't seen from a couple years ago. Butters discovers vampires at school and the Goth kids also notice them because they are angry that instead of being the few kids who look good at school now all the kids who used to be jocks are now dressing in black. Not just black, but styling on the goth look. Stagg made a joke that they must be shopping at Hot Topic. Hot Topic is a store in malls that makes all these prefabricated clothes for Emo and Goths and punk and infant shirts with The Misfits. The firs time I saw it I couldn't believe it, it was so funny and when I was goth and punk...we had to make our own clothe. Now you can buy them already made. No...I mean mass-produced...not even a independently owned boutique for urban goths. The store is riot. Turns out, that in fact it is exactly the conspiracy in the episode called The Ungroundable. All the kids are being turned into vampires by being taken shopping by the vampires to Hot Topic. The leader of the vampires ends all his sentences with "per se". 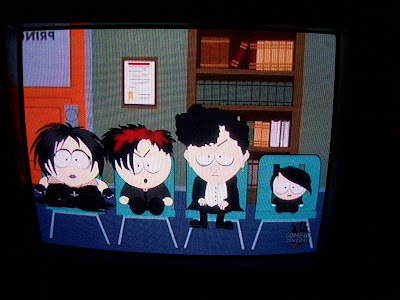 Eventually, through Butters, the Goth kids at South Park(in above photo at the Principals office) find out the conspiracy and demand a assembly in the gym and write a speech they present to the school.

Fellow students. Over the past week there's been a lot of confusion, and so we have asked for this assembly to clarify the difference between Goth kids and Vampire kids. Let us make it abundantly clear: if you hate life, truly hate the sun, and need to smoke and drink coffee, you are Goth. If, however, you like dressing in black 'cause it's "fun," enjoy putting sparkles on your cheeks and following the occult while avoiding things that are bad for your health, then you are most likely a douchebag vampire wannabe boner. Because anybody who thinks they are actually a vampire is freaking retarded. [two seconds later everyone begins to applaud the speech. During the applause, Goth 2 steps up to the mic and gives everyone the finger]
Posted by Candy Minx at 15:51

I hate to admit it but I LOVE Hot Topic clothing....never been to a shop but love buying the used stuff on eBay when the kiddies go back to the "ali-gator shirts" and the great thing is they come pre-puked on as none of those little boogers can hold their boze!

I enjoy Southpark and Family Guy et al but nothing and nobody outdoes Homer.

Ink, thats funny. We all laughed around here at your comment, wonderful! I never thought of them showing up on eBay.

4Dins, Well of course. Homer is the toon king.