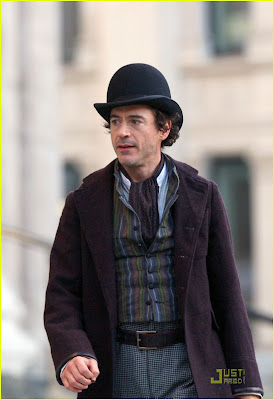 I really geek out on mystery in novels in general but this extends to British mysteries. I used to read tons of mystery novels. I haven't read as many in the last few years as I used although I've been turned on to a couple new series. I love a good series with a regular detective with a compelling personality. Who doesn't , right? I love getting into British mystery series and have a bunch I followed over the years including Midsomer, Cracker, Prime Suspect, Inspector Lynley, Inspector Lewis, Morse, Poirot, Miss Marple, and Sherlock Holmes. its' kind of funny becase these shows are super "straight". I love that about them. I love the study of the human condition that a good yarn of mystery can give us. 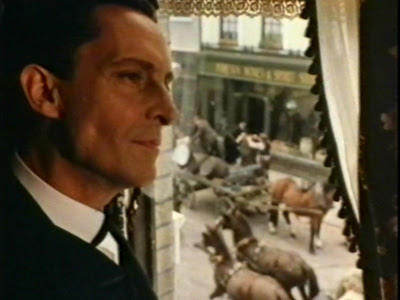 The Jeremy Brett adaptaion of Sherlock Holmes is one of my most ultimate favourite tv series. I adored Brett and can watch the programs over and over...sometimes if I can't sleep I will watch a whole episode on YouTube! I have a little tiny Sherlock Homes fetish. I'm not like crazy detail fan obsessed but maybe the next best thing, at least when I first got into the novels. I read all the Sherlock Holmes novels in a compendium one summer. What a fantastic experience. I will watch nay rendition of Holmes,a comedy, a spoof, a serious adaptation. So...I was pretty excited to see the new Sherlock Holmes with two hunky studs, Jude Law and Robert Downey Jr. Yummy! For the first few minutes...I gotta be honest. I had trouble with Downey as Holmes. I was struggling. But then...there was one moment where it just happened, I bought it. I loved following the subtle expressions in his eyes. In fact, Guy Ritchie has the camera on Holmes eyes quite a bit during the movie. Downey's portrayal is really good for a couple of reasons. One, I liked and believed the eccentricity of the character. His mood and how he wore hats and used them to express his emotions was a good detail. In one scene at a cemetary it is quite brilliant how within two minutes the very same wardrobe transforms on the man. This Holmes is hilariously funny because like all nerds...he is dead earnest. He has no idea how funny he looks: he thinks he's got swagger-not! It is the commitment to being dead earnest that some of the best sight gags are achieved by Downey...who is a superb physical comic. The plot is not very developed. I was sad about this...but all other aspects of the movie are fantastic. There are enough riffs and revisions that this is a highly successful film adaptation. I loved the friendship between these two blokes. I give it an 8/10. (If there was a good strong mystery...this movie would have been perfect!) 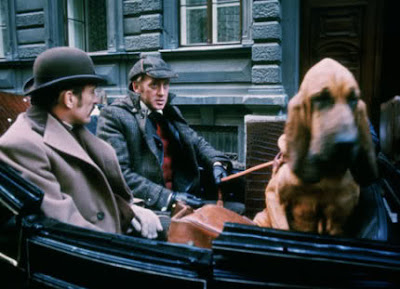 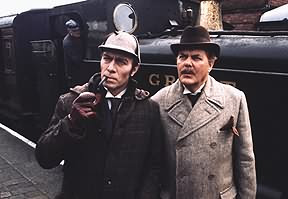 One of my very favourite adaptations of Sherlock Holmes is the movie Murder By Decree , a Canadian production dirrected by Bob Clark, starring Christopher Pllummer and James Mason. This was good evil fun, with a decent plot for ti's time...now over done in many movies. Murder By Decree is delicious because it combines Sherlock Holmes and Jack The Ripper. Yummy! 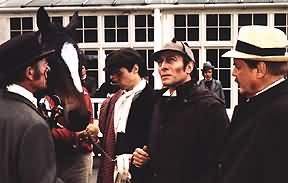 Jacqui and her boyfriend Max (and yes he is rich)....;-) went to see Sherlock Holmes last night and she's recommended it to me.

Certainly not in the late Jeremy Brett mode but, apparently, the 'one liners' are very funny and she enjoyed the ending - fortunately she won't tell me as I want to see it - along with 'Daybreakers'.

I wouls recommend 'A Touch Of Frost' with David Jason if you enkoy the shows you said.

I saw the new Sherlock Holmes on Boxing day. While I enjoyed it as an action film, a buddy cop-type movie, I didn't buy Downey Jr. as Holmes at all. Jude Law as Watson? Fantastic but this new Holmes? No thanks. If he wasn't playing the great detective, it would have been a fantastic film for me but I couldn't get past the thought that this is NOT the Sherlock I knew. I absolutely love Jeremy Brett as Holmes and this will always colour every other adaptation I see.

Did you catch any of the Sherlock Holmes movies that TCM showed during a 24 hour marathon a couple of weekends ago? I hadn't really seen any of them, so it was cool to check them out. In addition to most of the movies starring Basil Rathbone and Nigel Bruce, they also showed "A Study In Terror" (a 1965 movie w/ Holmes and Watson taking on Jack the Ripper).

4Ds, there are some good lines and sight gags, for sure. I think you'll enjoy the movie.

Karen, yep, I had a moment but then...I just got into Downey and embraced his portrayal. It was hard at first.

Malcolm, no I missed those. I had watched a bunch about 6 months ago. I forgot about "A Study In Terror" I love that one too!