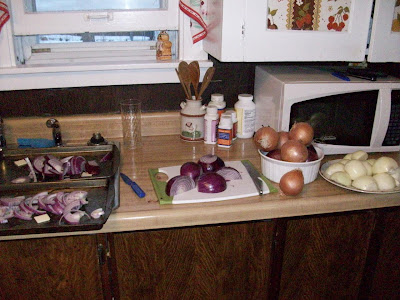 I am a freak for soup. I love eating soup but I especially love making soup. I mentioned that I had made French Onion Soup for New Years Eve and we took it up north to the farm. This soup was so deadly and I made some more for Andy and Tricia arriving this weekend last night. 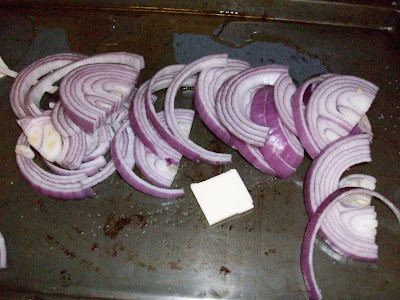 I've made French Onion Soup a jillion times but it's always been an elusive beast to me, I always felt I wasn't getting that rich languid decadent layer of flavour I wanted. I thought the "secret" was a specific kind of wine or something. No. Like most good things in life there isn't a secret...just labour or a knack. In
December I happened to be laying around grandmas when America's Test Kitchen was on PBS and they claimed to have the secret...the definitive French Onion Soup recipe. I was intriqued! Turns out you need to cook the living shit out of the onions. That's the knack. The trick. The deal. The test chefs on the program had found a quick "cheat" of sorts to save a little time but otherwise this was a damn good recipe they promised. So I took notes. They used red onions, but I have landed up using both red and yellow onions. Slicing up a lot...like 25 onions half of each red and yellow then laying them on a baking sheet. I've used two here with a little grapeseed oil, a little olive oil and a few chunks of butter and sea salt. Cook these onions in the oven at 350 for an hour and a half. Then move them into a thick stovetop pot. I took the baking sheets and deglazed them with a bit of stale champagne and vegie broth. 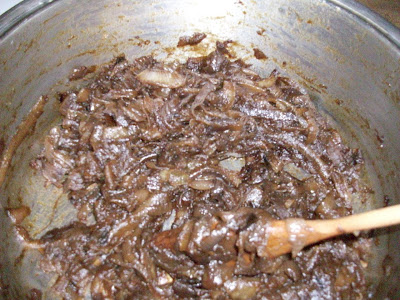 What the heck is deglazed? I know right. And what is carmelized? I know right. Like what is the fine line between burning and making a rich flavour. A very thin line. Some recipes and instructions say to put salt butter and sugar to carmelize onions. NO. You don't need the sugar because the act of cooking the onions till they are brown is working with the sugar already in onions. And actually yellow onions are a lot sweeter than red onions which is a good reason to use red onions in this recipe in the first place. So cooking the onions till they start to turn brown and "melt" is carmelizing. But don't actually burn them. I'm from the camp that a burned onion is garbage. Sorry, it just tastes bitter to me, throw them out if you burn them. Take the onions to this side of burnt though. Cooking them on a baking tray for an hour and a half saves you a fair bit of time. However, I spent a few hours carmlizing the onions, then adding a little marsala wine or stale champagne and organic vegie stock to the onions to deglaze the pot. Deglazing is when you use liquid as a "solvent" to take the browned onions off the bottom and sides of the pot. That is what gives the soup it's sick rich flavours. I deglazed the onions a half a dozen times last night while watching American Idol. Wow, I actually found Steven Tyler sexy. He's looking better than he used to. Anyways,After a lot of standing around and stirring and carmelizing...six times letting the 1/4 cup or so of liquids reduce into the onions they are ready. I mean can you believe how dark and muddy these onions look? Kind of freaky. But you then add a litre of organic beef stock and a litre of organic chicken stock...some grated gruyere cheese and WOW! Deadly. 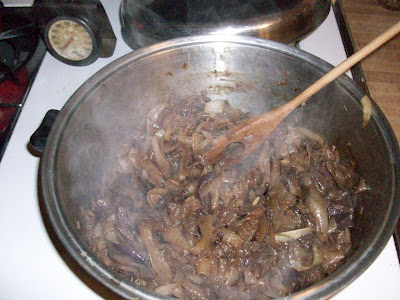 (1) I love French Onion soup, but not one that is deadly.

(2) There's a restaurant up the street that makes a mean French onion soup. For the longest time, I thought there was such a thing as a "french onion." But now you're telling me they're just plain red and yellow onions. While some of the mystery is gone for me, it's good to learn new things.