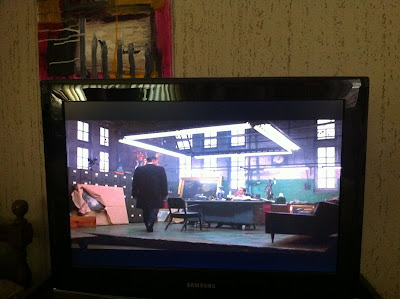 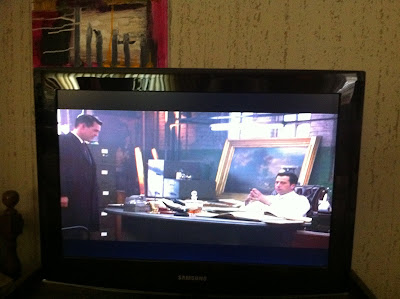 The Playboy Club hasn't got very good reviews, but I actually like the first two episodes I've watched. It's not LOST or The Wire or House but it's not bad. I thought a couple of the main characters good actors and I enjoy the setting very very much. The series may not test your intellect like House or LOST but it's a little bit of fun so far.

Pan Am feels a little like The Playboy Club with similar ways of setting up the characters. Both these shows feel like "Mad Men Lite" but again, they have fun things about them. I think the camera work and settings of Pan Am are a lot more arty than TPC...and Christina Ricci plays a Greenwich Village beatnik when she isn't cleaned up as a flight attendant. Seeing the beatnik side of her life might be a lot of fun.

Whitney. Perfect. Everything about this show rocks. Stagg and I laughed out loud.

New Girl. Didn't like it. Have watched both episodes so far. Didn't like them. Not funny. Awkward timing in the writing and direction. I will try one more episode because I really believe in Zooey Dechanel. but if it doesn't come together I'm out.

Prime Suspect starring Maria Ialwayshaveoralsexinmymovies Bello is really good. I am more than pleasantly surprised because I was a huge HUGE fan of the original series starring Helen Mirren. I was super curious to see this revisit to the character of Jane Tennison. This might be considered the third version seeing as The Closer is the same fish-out-of-water premise female boss in male dominated world. I love this kind of plot base. You know like Silence of The Lambs the fairy princess has to go to the dragon to save the town from another dragon...the tweak being the female must be inside the mind of the dragon, and the dragon is the male world. I like Maria Bello very much (The History of violence and The Cooler). And she is compelling and interesting this role. she is really creating the energy of this woman and it grabs you and draws you in to the whole story. I also like Peter Berg (The Last Seduction and Friday Night Lights). A rigourous standard in this series is already apparent in only two episodes. The people working on this have got it right. They have a great way of presenting the characters, the crime drama and the relationships that bring a new light into a classic plot. The writing is very good with emphasis on the timing of what we know about the characters and how they work and move in the world. I also really love the relationship Bello has with her father. The way they talk to each other and know each other promises to be a fullfilling emotional backstory.

Charlie's Angels pilot just wasn't that good. Probably won't watch again. No character interest. No excitement. If it gets a buzz and warms up I'll check it out again later. Sometimes a new show has growing pains.

have you watched 2broke chicks? maybe it is 2 broke girls? really funny, love it.

Yes, I forgot about that one. I really like it. xxxoooo the line "oh I didn't know you were on break" killed me....

I thought the first episode of Prime Suspect was promising, but the second episode was more like a remake of The Closer - OK, pretty good, but not nearly as ambitious as I had hoped, and not in anywhere near the same league as the original Prime Suspect in terms of character development and complexity. Still, I'll watch more and hope the ensemble develops well and there is some good writing on the horizon.

Mr. A, yeah well like both the other shows this may need to shift between action/mystery story and character. The original program changed quickly from the fish-out-of-water theme between men and women...and became more a procedural mystery story. I think it's attention twenty years ago on societal pathologies was innovative for its time. I think it will be interesting to see how 20 years later with our awareness of those issues more mainstream...how will this show be innovative? Or will it being edgy be an issue for viewers or writers? How has our culture changed in 20 years or has it enough for the writers to dig deeper with fresh point- of-view into workplace sledge? Or dig into something that Law and Order and CSI franchises haven't already exercised? And after all...does the tv show deliver on good gripping mystery stories?