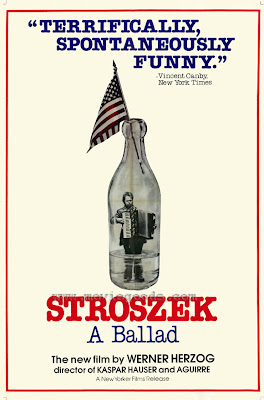 Our civilization doesn't have adequate images, and I think a civilization is doomed or is going to die out like dinosaurs if it does not develop an adequate language or adequate images. I see it as a very very dramatic situation. For example, we have found out that there are serious problems facing our civilization, like energy problems, or environmental problems, or nuclear power and all this, or over-population of the world. But generally it is not understood yet that a problem of the same magnitude is that we do not have adequate images, and that's what I'm working on-a new grammar of images. Werner Herzog, director of Stroszek, Aguirre, Grizzly Man and Rescue Dawn.


Clips from Les Blank's classic 1980 short, "Werner Herzog Eats His Shoe." The film documents Herzog fulfilling a bet he made with Errol Morris: if Morris would finish his brilliant first feature "Gates of Heaven," Herzog said he would eat his shoe. He uses this public stunt to say some very serious things about American pop culture, filmmakers becoming "clowns" to promote their work, and the culture of images (or lack thereof).
Posted by Candy Minx at 03:08

Labels: one of my gods werner herzog