When Jennifer Lopez performed a couple weeks ago on the AMA Awards with a strange boxing costume I thought...gee what happened to J-Lo? I didn't think the song was all that great, in fact, I hardly noticed it because I thought her wardrobe was really off-putting. And then she fell in the performance and the cameras caught her swearing off stage and looking pretty angry. I thought...where is that amazing performer? Then the other night she performed on So You Think You Can Dance and I couldn't believe it was the same song or same person. I loved her performance the other night and thought the lyrics were hilarious. A lot of hip hop and rap songs personify the cultural war of people from lower incomes not only conquering cultural status by making the charts, making millions but also buying and wearing articles previously only worn by the wealthy. Have you ever noticed how say Snoop Dogg and other rappers have assimilated "old English" style writing? Thats an example of co-opting "history" and "culture" and moving it into a whole new social group. Jennifer Lopez's new song cracks me up because of the lyric "I'm throwing on my Louboutons". It's so cute because one wouldn't throw on five inch stilettos...you use a shoe horn and carefully slip them on...but I love the idea of this pissed off ex-girlfriend with expensive shoes just throwing them on. And the idea that all income brackets have love troubles. The average price of the following shoes made by Christian Louboutin are about $1,000. 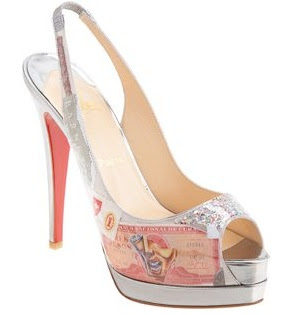 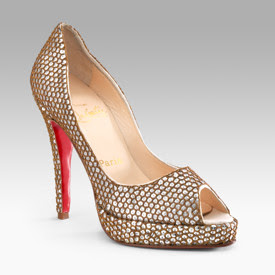 Mmmm - what sleek shoes. But can't imagine walking in them let alone dancing! I lost track of J Lo - do remember hearing something about her fall - this was an interesting post - never thought of fashion in quite that light - seems like the "stars" are always setting a style that we, as, their worshippers attain to - yet, not being as monied as the gentry, very hard to pull off!

Lopez is human. Good days and bad days just like us.

I guess she had a bad day formally and a good day latterly...

Mind you...if I could earn what she earns I wouldn't care about the 'bad' days!!!!

Thanks for finally writing about > "Break-Up Song For A Different Snack Bracket" < Loved it!