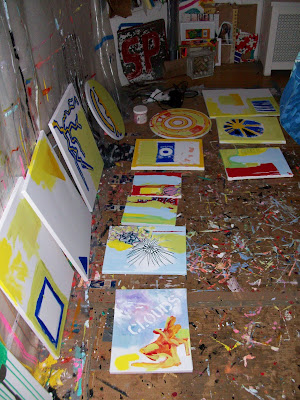 Stagg and I have been collaborating on about 20 small paintings again this week. Sometimes it goes smoothly and sometimes its a bit of a battle. I was joking with him...who is going to run out of paint first, him with his navy blue or me with my white painting out every bit of navy blue he put on the canvas. Sometimes we tell each other...I need to keep this section here or that...but most of the time we work quietly passing the paintings back and forth....each of us keeping or adding what we want. This week we both did a LOT of overpainting ha ha....but its fun...and about half a dozen are already going out the door for busking. 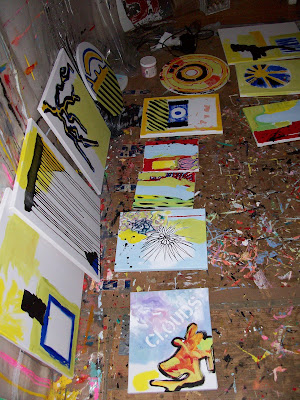 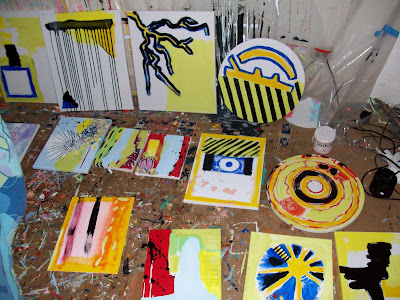 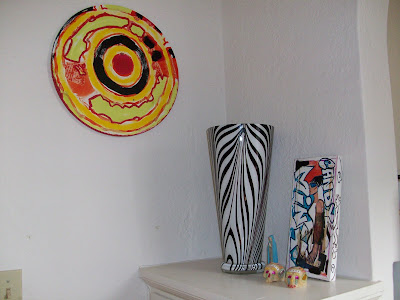 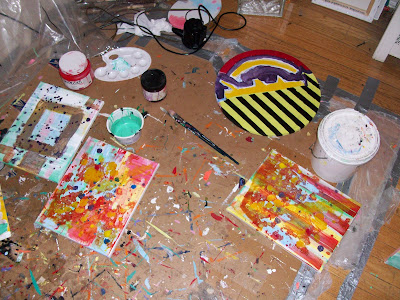 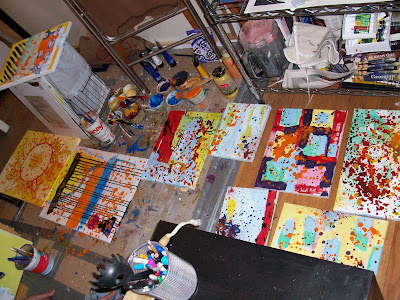 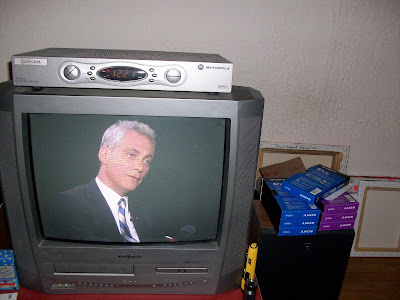 What kind of music do we play while working? Well sometimes we have the tv on and this morning Rahm Emanuel (who I LOVE how could I not love the real guy Josh Lyman was based on from the West Wing?) is on Charlie Rose. Emanuel lives a few houses down from us. Well, until he went to work in the White House. He said this morning one of his future goals is to be Mayor of chicago...omg...I got tears in my eyes. I used to like seeing the Secret Service waiting outside the Emanuels house...sometimes Mrs. Emanuel would be dressed up for a party and the Sercret Service would be walking her to her ride. I would be going out of my mind enjoying the scenario if I happened to be walking by. Anyways, pretty decent interview with Rose and Emanuel this morning. 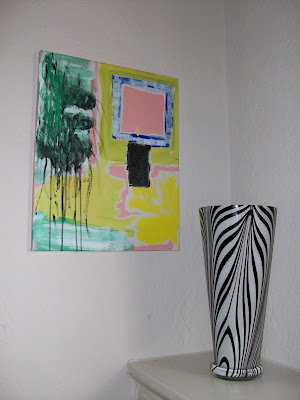 Sometimes I have to pull a painting out away from the others to see if it's "done". I'm using the plain walls and Polish glass vase to help me look at the paintings to see if they can come out of the oven... 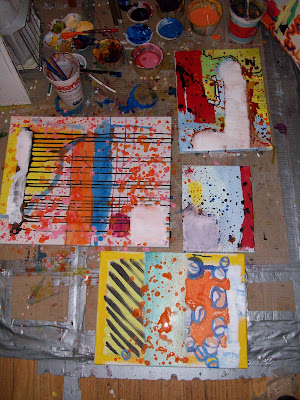 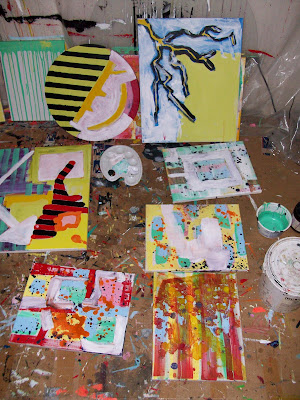 At one time Tuffy P and I worked on paintings in a similar fashion. We managed to survive it without any permanent damage. Har!

Wow, gotta give you guys credit. We can't even agree on what color to paint the walls. A lot of neat stuff. Good luck with the busking. I'm a big fan of Rahmbo, too. When push comes to shove, you need a guy like that on your side.

I used to be a bit arty farty myself. Cartoons you know. Got published at 15yrs old in The Manchester Evening News with a regular slot for nearly a year until I got bored / drunk / stoned / forgot to send one / etc etc.

I may be inspred again with this stuff!!!

Hmm. I know of collaboration in performing arts. I'm too much of a Philistine, I guess, to hear about it happening that much in the visual arts.

In regards to your previous post, maybe if you go on a binge Stagg will gain those nine pounds back?

And from the post below that, it would seem we have another reason to think about Dealy Plaza.

i love that you guys paint together! Good luck with the busking :-)