"Two spectacular failures, separated by only 18 months, marked the end of the modern era. In July 2008, the price of oil on world markets peaked at $147/ barrel, inflation soared, the price of everything from food to gasoline skyrocketed, and the global economic engine shut off. Growing demand in the developed nations, as well as in China, India, and other emerging economies, for diminishing fossil fuels precipitated the crisis. Purchasing power plummeted and the global economy collapsed. That was the earthquake that tore asunder the industrial age built on and propelled by fossil fuels. The failure of the financial markets two months later was merely the aftershock. The fossil fuel energies that make up the industrial way of life are sunsetting and the industrial infrastructure is now on life support." Jeremy Rifkin 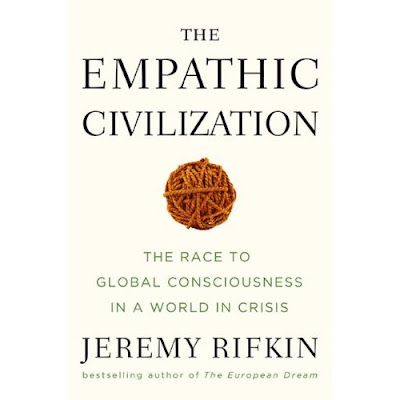 ..."The transition to biosphere consciousness has already begun. All over the world, a younger generation is beginning to realize that one's daily consumption of energy and other resources ultimately affects the lives of every other human being and every other creature that inhabits the Earth.

The Empathic Civilization is emerging. A younger generation is fast extending its empathic embrace beyond religious affiliations and national identification to include the whole of humanity and the vast project of life that envelops the Earth. But our rush to universal empathic connectivity is running up against a rapidly accelerating entropic juggernaut in the form of climate change. Can we reach biosphere consciousness and global empathy in time to avert planetary collapse?"
Posted by Candy Minx at 05:44