Surprise Opening Of The Simpsons! 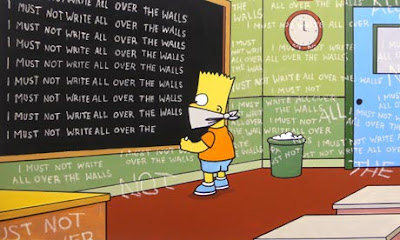 You know, sometimes I can't believe I've been watching The Simpsons for over 20 years. And it just keeps on giving. Last weeks season 22 premiere had a "cameo" with Mark Zuckerberg, of Facebook...coinciding with the opening weekend of The Social Network. Nice. Last night the program opened as usual...except it was made by Banksy! It's brilliant...notice Fox logo building is surrounded by barbed wire and scary lighting...

Apparently, Banksy working on the opening segment was a tight kept secret and the artist was inspired by rumours that the tv show outsourced its animators.
Posted by Candy Minx at 09:02

saw it. loved it.

Hi Candy! It's been too long. This was a well-done opening sequence. Although I was somewhat familiar with Banksy's work, I didn't realize that his identity is such a mystery.

This reminds me I wanted to send you a link to this web site... You may already be familiar with it...