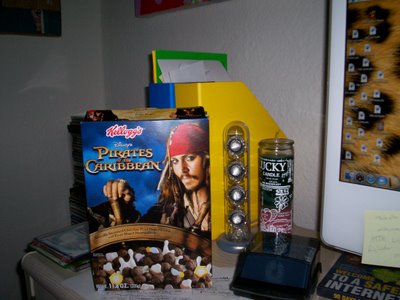 had a supper and a kind of eucharist ritual in its belief system/myth. I'm in heaven with the Johnny Depp cereal. Okay, I don't eat cereal, but I get the package when Stagg is done! I tried some. I did feel closer to Johnny. And pirates.

"This remarkable explanation of the tauroctony is based on two facts. First, every figure found in the standard tauroctony has a parallel among a group of constellations located along a continuous band in the sky: the bull is paralleled by Taurus, the dog by Canis Minor, the snake by Hydra, the raven by Corvus, and the scorpion by Scorpio. Second, Mithraic iconography in general is pervaded by explicit astronomical imagery: the zodiac, planets, sun, moon, and stars are often portrayed in Mithraic art (note for example the stars around the head of Mithras in the carving of the tauroctony illustrated above); in addition, numerous ancient authors speak about astronomical subjects in connection with Mithraism. In the writings of the Neoplatonic philosopher Porphyry, for example, we find recorded a tradition that the cave which is depicted in the tauroctony and which the underground Mithraic temples were designed to imitate was intended to be "an image of the cosmos." Given the general presence of astronomical motifs in Mithraic art and ideology, the parallel noted above between the tauroctony-figures and constellations is unlikely to be coincidence."

about migrating swans and the constellation Cygnus.

And some traditional academic work on sun/moon activity in the swan spa area.

Inter-faith and inter-society understanding in an interdiciplinary
Posted by Candy Minx at 12:51