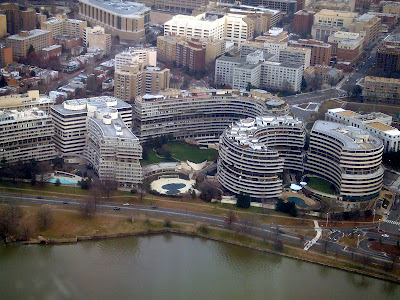 The Watergate complex was developed by the Italian firm Società Generale Immobiliare, which purchased the 10 acres which constitute the plot of land on the defunct Chesapeake and Ohio Canal in the early 1960s for 10 million US Dollars. Italian architect Luigi Moretti designed the six buildings on the site: a hotel, two office buildings, three apartment buildings and a retail center. The name of the complex was derived from the terraced step area to the west of the Lincoln Memorial that leads down to the Potomac River. The steps used to face a floating performance stage on the Potomac River, creating an amphitheater. This area was originally planned as the official reception area for all dignitaries arriving in Washington, D.C. by water.

I want to stay in the Watergate Hotel sometime. It is such a cool building. There is a shopping complex with a Safeway grocery store where Uncle G. got his snacks. Uncle G. is going to be upset I filmed him in his robe! We had such a good visit with him and I rarely get a chance to tease him...click on his name to see a serious picture of him...
Posted by Candy Minx at 10:26

layed out article, so want to discover whatever you write about up coming!
online casino