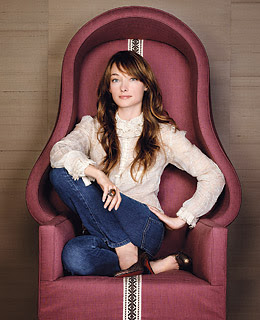 I love the tv reality game show Top Design. I tune in just as much to see what Kelly Wearstler is wearing (above) as to see what design disasters or masterpieces will occur. I loved it when Jonathan Adler shakes his naked foot in loafers and when he says "See Ya Later Decorator" (it seems he isn't going to say it this season). I also record the episodes for Mister Anchovy and Tuffy P. I think we can learn a lot about the human condition by studying the arts, and the arts for me includes interior design. I love decorating and I love decorating magazines. It seems art critic Jed Perl sees some value in reflecting on interior design too.

I had no idea that Edgar Allen Poe had written an essay called The Philosophy of Furniture. How delightful! I found this out in last months article on design by Jed Perl. His article discusses designers Jean-Michel Frank (Anne's relative!) and Thomas Hope. I posted some pics here in case you take the time to read his fascinating article. It's long but so interesting.

Among nineteenth-century art critics, there was a fascination with painters such as Vermeer, de Hooch, and the Le Nain brothers, whose interest in the details of everyday life prefigured contemporary realism, with its emphasis on social and psychological dynamics. The studies of models in the studio that Corot painted in the 1850s, and a great many of the figures of Degas, Vuillard, Sickert, and Bonnard, are as much portraits of interiors as they are portraits of people. With Sickert, Vuillard, and Bonnard, the interior is often regarded as a new kind of physiognomy, with curtains and carpets and chairs observed as closely as the wrinkles on a forehead or the color of a person's eyes. Similar arguments can be made about certain earlier works, notably the interest in quotidian experience in Renaissance paintings of the Virgin at home or of Saint Jerome and Saint Augustine in their studies. And one can even look further back, remembering that many of Thomas Hope's ideas about Greek furniture, of which almost nothing survives, were derived from representations of interiors on ancient vases. But the long history of symbolic interiors notwithstanding, the representation of rooms certainly became more psychologically fraught as time went on. Renaissance and Baroque interiors tend to function allegorically, while in the modern era interiors are almost invariably infused with a private mental weather. 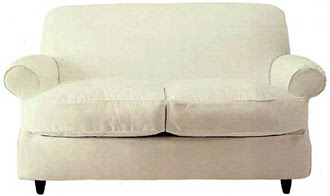 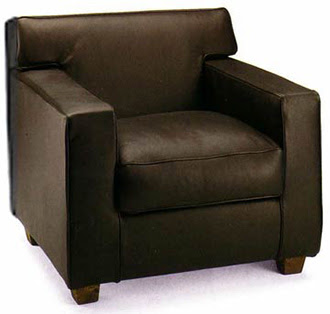 Two pieces designed by Jean-Michel Frank. Wow, you can really see how we are still having this sensibility either of these might be found flavoured in IKEA. 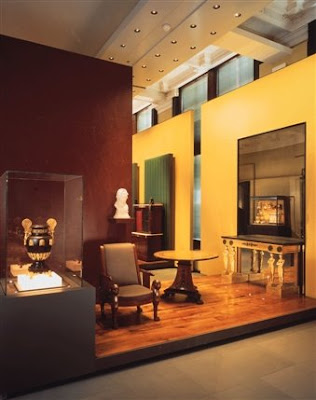 Thomas Hope at the Victoria and Albert Museum. 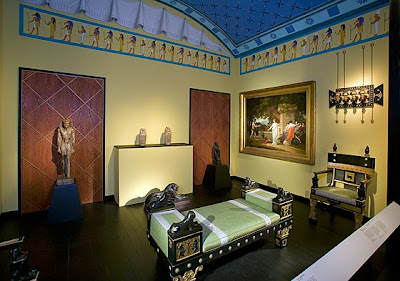 "Egyptian Room" The Egyptian Room was one of the most inventive interiors of its date in Europe. Here Hope displayed his belief in the importance of the ancient Egyptians to the origins of western culture.

Mingling genuine pieces of Egyptian sculpture with exotic furniture designed by himself in an Egyptian manner, he also exploited his novel colour theories. The walls and furniture, he explained, were in the 'pale yellow and bluish green of the Egyptian pigments, relieved by masses of black and of gold.' 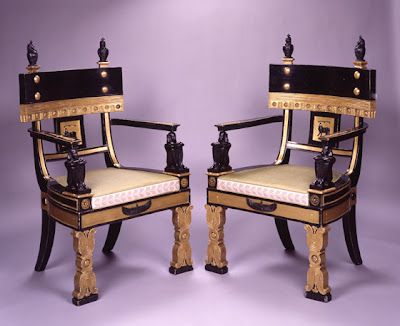 Designed after a Thomas Hope style.

Perhaps it is not surprising that novelists, working in what is the most open-ended and fluid of literary forms, should be drawn to interior designers, whose work is almost diabolically difficult to define. Like the novelist, the decorator can be a poet, a portraitist, a historian, a psychologist, a social critic--and sometimes all at once. Balzac, let us not forget, was a manic collector who lovingly described the room where Cousin Pons, the insatiable collector in the novel of that name, kept the Old Master paintings that he had discovered in junk shops and bought for a song. Writers who are sensitive to the environments in which people live will quite naturally take an interest in the work of interior decorators, who weave a sort of fiction out of curtains and rugs and chairs and couches--a fiction in which people then proceed to live their real lives. The work that Hope and Frank did was at once insistently personal and strangely utopian, both realistic and romantic. In their way, they too were weaving a kind of fiction. To look at the wildly over-the-top eclecticism of Hope's "Egyptian" chair or the ascetic severity of Frank's living room for Nancy Cunard is to see design as a speculative enterprise: not a study of things as they are but a search for the way that things ought to be. After their own fashion, both Thomas Hope and Jean-Michel Frank were asking the biggest question of all: how should we live?

Related Links:
The New Republic article by Jed Perl
All home owners would be well served to read Home :A Short History of An Idea by Witold Rybczynski
City Life is another wonderful exploration.
Posted by Candy Minx at 13:14

Those decorating shows suck me in every time. :)

Hey, quick question. How did you get the thursday 13 blogroll into that nice, little scrolling box? I want to start doing them again, but the blogroll code from the site runs for miles! and i forgot how I did it the first time. grr.r

Those pieces are fantastic but for us round people.. Its harder to sit on a square piece of furniture.

Har! I can hardly bear to watch that show. Tuffy likes it, though.