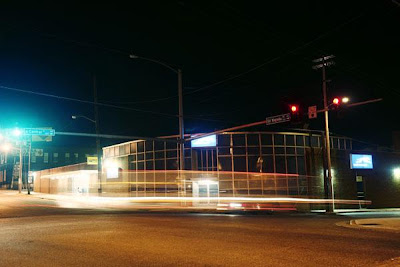 Photo by Shawn Poynter
What a gorgeous photo of the Knoxville Greyhound Station. My friend Wes sent me the following news article about this Greyhound station....he should know because he's picked me up and dropped me off enough times. I must say though, this photographer is very talented because it looks a lot prettier than I remember.

To get from North Carolina to Oregon on a bus requires three days, multiple connections, and a stack of tickets.

“What are you, my probation officer?” says Jerry B. as he shows a questioner the contents of a Greyhound ticket jacket. “I’m trying to get to Eugene to see my sister.” He picks a dried glob of pizza cheese off the envelope and laughs. It is 10:30 on a Saturday night and he is drunk.

Jerry had not planned to be here, under the glaring fluorescent lights of the Greyhound station on East Magnolia Avenue. He was removed from a westbound bus and told he could not board another until he sobered up. That was hours ago, before he found a nearby bar and bought more alcohol. Jerry will be here until at least 6 a.m. Sunday.

Over the next few hours there will be buses to or from Atlanta, Roanoke, Va., Nashville, Charlotte, N.C., and Cincinnati.

The waiting room is shaped like a rectangle and sits under a high ceiling. It is bordered at one end by the ticket counter, and a bank of vending machines at the other. Video games and the station’s restaurant are along the north side of the room, parallel to Magnolia. Payphones, a cellular phone charging station, and doors to the buses are on the southern side.

Larry Haney wears a brimmed hat, long underwear shirt, and sweatpants—and is aware that his skin color seems unnaturally pale. He is on his way to Chatsworth, Ga., from the West Tennessee State Penitentiary in Henning.

“I found out I had my first child, and she’s eight years old,” says Haney. He served 11 years for his involvement in an armed robbery and spent the final 18 months in the maximum-security facility at Henning.

Haney goes out to the loading platforms to smoke cigarettes with some fellow Greyhound travelers. He knows Knoxville from when he worked here with his father, a contractor, on building and remodeling jobs. There have been changes since 1997.

“They didn’t have too many little cell phones out here when I got locked up,” he says, back inside the station, as people chat and text and ringtones are heard emanating from bags and pockets.

The terminal’s seats are made of metal wire and tubing, are built at a slight recline, and appear to have been sprayed with coats of black Plasti-Kote enamel. They come in sections of three, and most are backed against sister units. People sitting in them can easily hear the conversations of others, even if they must swivel their necks in order to put faces to the voices.

A woman named Dawn is here with her teenage son. She is 42 and the two of them are moving from Clinton to Blytheville, Ark.

Her ex-lover does not know she is here, Dawn says. Mother and son are leaving a week earlier than planned. “Things got arranged,” she explains. “They bought my ticket.” Her brother will meet them in Blytheville. “He’s going to help me get a job where he’s working at and give me a place to stay until I get on my feet.”

Airports and bus terminals share little in common beyond hosting disparate collections of humanity. At McGhee Tyson Airport and other aerodromes, magnetometers and Plexiglas separate the air side from the land side. Air passengers do not disembark in downtown. Residents of downtown do not wander into an airport terminal.

“On buses you meet some very odd and mysterious people,” says Shaun Enoch, 28 and a regular on Greyhound. “On an airplane it’s very laid back.” He is traveling to West Virginia from Dallas. His time between buses in Knoxville: 60 minutes.

I recommend the whole article 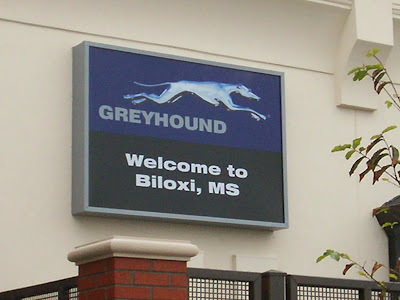 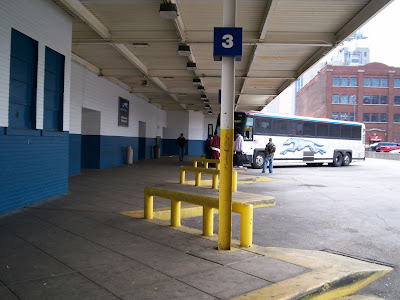 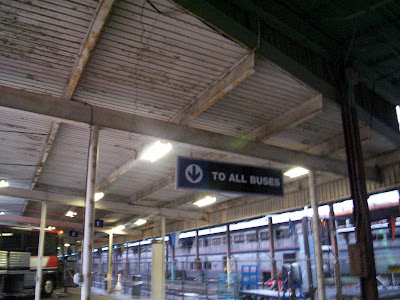 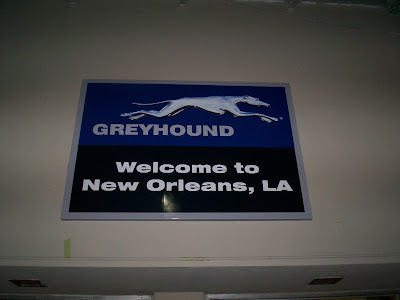 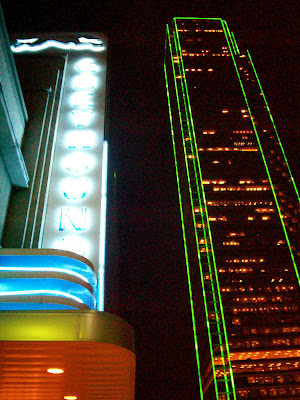 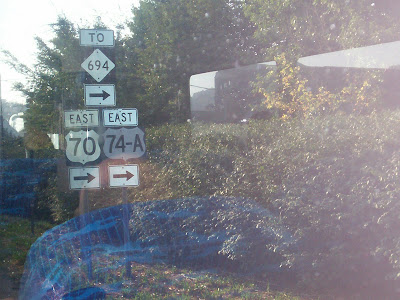 Been a long time since I had to ride the bus like that. I was 15 years old and going from Las Vegas to Mn with my mom. Then Jeff and I took one from Green Bay to MN about a year after we moved to Green Bay to go visit family in MN. Its amazing to hear the stories you hear on the bus. Then I had to take the bus home with Kora when she was 18 months old and the bus driver told me she was the best little girl he had seen in ages. She just sat there looking outside.

I sooooo want to travel on a Yank Greyhound bus.

Over here in't UK we have shitty coaches with no toilets - I once pissed into an empty can of beer in desperation (mind you if you think I was desperate some mad bastard drank it)....;-)

I insist I will get over there one day.

I agree with Shaun Enoch - last time I rode Greyhound, I woke up with a sailor's under under my shirt - now if it had been a sailor of my choice I would not have minded perhaps -

I remember my mother putting me on a bus in Wyoming when I was five or so and sending me somewhere - I do not know where - all I remember was, not being afraid of being alone, but being afraid the bus would fall off the edge of the cliff . . .

Tweetey, it is a weird experience being ona bus with a small child. And strange memories and people one meets.

Preacher, oh yes, even if you take a ride just for a few hours you will really experience Americana. One of these days right?

Gardenia, you have a good memory. I find you have to get a kind of body armour on when riding the dog...hard to explain but an attitude huh? I would be afraid of the cliffs in Wyoming etc too!