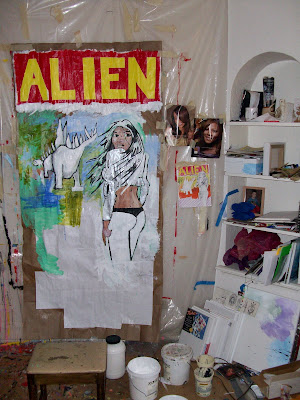 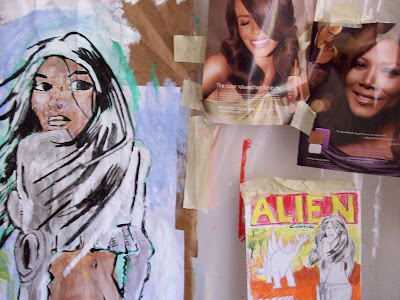 We've got a book on "How To Draw Manga" Stagg brought home from work. So I kind of wanted to do a riff on a painterly version of manga. Actually, manga has very rigid formulas for the work, even a strand of hair going in one direction can make the formla fail. So really, everything about this version is wrong, but it's fun to break rules sometimes. The idea of such brush strokes and wild style is antithetical to manga. The comic style is more like a pulp fiction book cover. 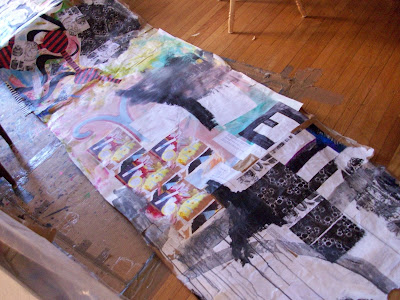 The wallpaper is getting quite long. I've managed to make an artwork that can only be seen...at least for now...in film. I'm not sure what I think about that, it's pretty funny. I've made wallpaper ever since I began painting as a kid. It's an obsession. As soon as the ground is dry enough we'll video this stuff by stretching it out along the sidewalk out front, and using a board with the camera duct-taped to it. I solicited assistants on Saturday. 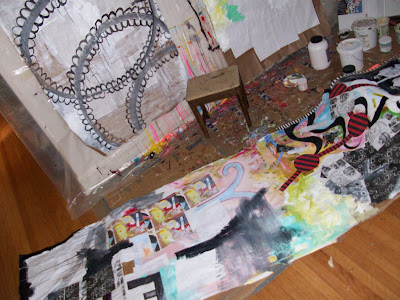 The top section on the right "alien comic" is going to attach to the roll on the floor. 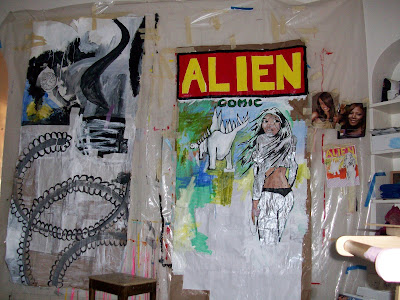 The top left section is attaching to the bottom of the right section, below the woman... 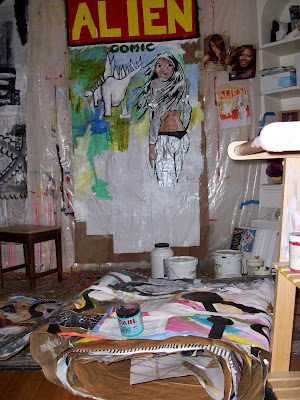 Some tweaking...she doesn't have a gun in the first picture. Her hair wasn't big enough, or with contrasts from black and white dramatic enough. I needed to adjust her cheek & jawbone. The dino-monster was out of proportion...all fixed! 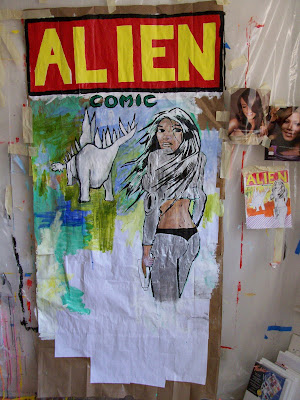 I love it! You are creating an installation! Always so much creativity buzzing around you guys, oh, how I wish I lived closer!

I tried Icon painting once, but also broke out of tradition - but then it was just sort of iconic, but not an icon...

The Mango, but not completely, is very cooooooooool

Oh, I see, a Japanese comic book or a graphic novel. gotcha.

Candy and Stagg those are awsome paintings.. never heard of doing wall paper like that though. Jeff would shoot me but I cant paint anyway. My artistic abilities are in crocheting blankets and now hair ties with thin thread. these are amazing though guys.. Keep it up.