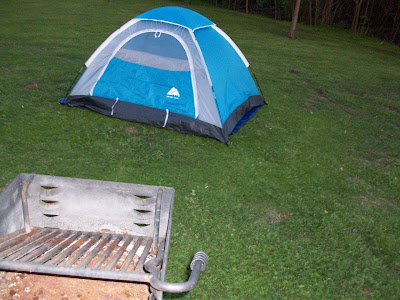 We've moved to a State Park about 15 minutes from the French Quarter. Our Guest House had a huge bunch of people come in this week with a previous reservation. (probably from Europe, the European tourists are massive, everywhere here, including the campsite). It's really nice to be out in the woods...okay its actually a swamp. We're on the section across from New Orleans downtown called Algiers or Gretna. It's a small state park but its really nice to come back here after being on the square busking all day.

Stagg has only gone camping once in his life before. His uncle, who was a Vietnam Vet, took him and his cousins camping once. Stagg is pretty freaked out about nature never mind actually sleeping in it...but he is doing pretty good. He collects firewood mostly and does the dishes at the "comfort centre".

Last night I hear a uncht of noise and Stagg is awake...with the flashlight out the window of the tent. It's 4:30, pitch black, and quite cold. He's in his robe and pjs and looks a bit like a stretched out Yoda. I call him Yoda when he was walking around the campsite like that. He says "There's an animal getting at the bag of food." I say "I thought you put all the food in the car." Stagg says, "I hold out this flashlight and I can see it's eyes glowing. Then I rattle my keys and he walks away. Then he comes back." I say, "Let me see." Yep sure enough there is a raccoon dragging a large bag of dry goods from under the picnic table out across the campsite. Little bastard.

So we open the tent, get some huge sticks stacked next to the fire and creep out to the picnic table banging the ground with our sticks. I so do not want to get Rabies shots. I also really really hoped no one saw us doing this. We surely looked like morons. We got the bag of dry goods and put it in the car. All good. Goodbye Rocky Raccoon don't check into this room! 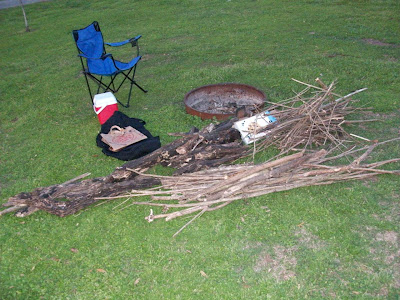 Stagg is great at collecting firewood. 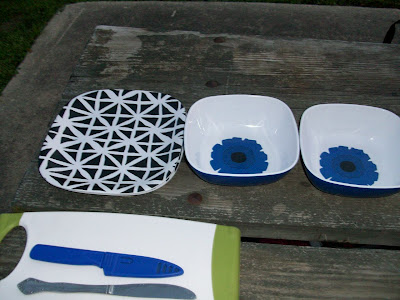 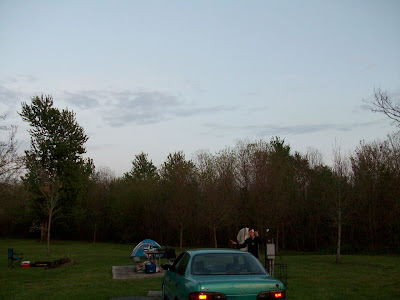 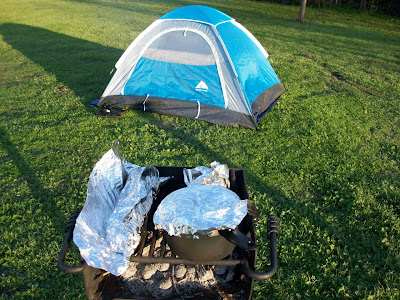 On the left is a bunch of onions, mushrooms and whole cloves of garlic, in some butter wrapped in foil. In the pot is some organic rice and an extra bundle of onions on the right. 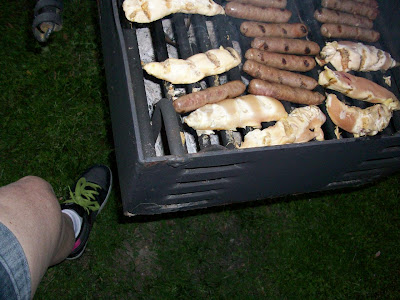 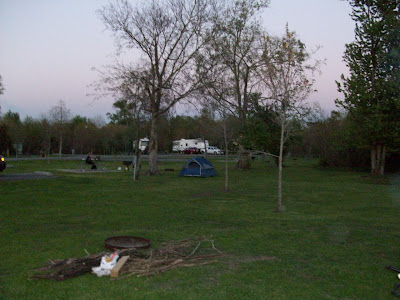 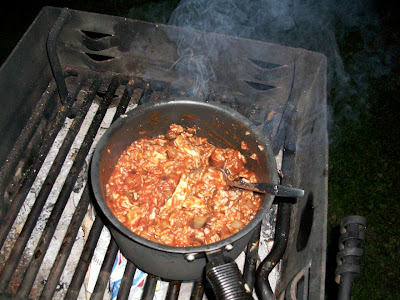 The finished Jambalaya. It was delicious although a little too much tomatoes we still loved it...tastes so good eating outside... 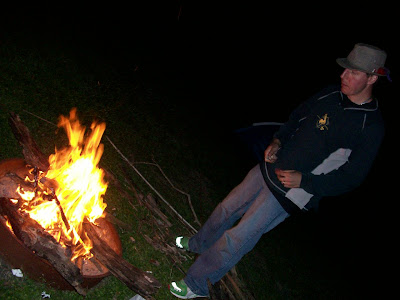 No jokes about fire thank you very much! In this case...its the healing power of fire! We're gonna stay here for a few days and then back one night or so in French Quarter then...we'll see. Also have another bit of an announcement...will post later. (We have Wifi at the campground. Whoo hooo!)
Posted by Candy Minx at 15:00

great to see the pictures of the campground after talking with you about it the other night!...I love campfire cooking.

How incredibly fun & amazing!!! So glad to see all the pictures & read about your goings on. miss u both xxxoxoxoxo

Mister Anchovy, yeah it was so good talking on the phone.

I think I will have free phone after 7:30 and weekends in a couple days. I'll let everyone know. It feels so good to just hear familiar voices. It was good for Stagg talking with you last night.

TVO, that goes for you...and right back at ya...I MISS you...wheres our voddy tonics?

you guys are so adventurous ! how awesome !

Glad you two are having fun!

For those of you who are purchasing Taps,we realize that this is one of the most important purchasing decisions you will make. You have made the best choice in choosing one of our Bathroom Sink Taps,Kitchen Taps or Shower Taps etc, as they are constructed of the highest grade materials to ensure that your new Taps lasts forever. You can be confident in your purchase as each item comes with a no hassle 30 day return privilege.

Oh what fun! Life is an adventure with you. wish I hadn't felt so crummy this weekend - sitting here with my Kleenex and stomach thinking how much I enjoyed having you here.

These kind of picnics are so refreshing. Heating and Cooling Hamilton
I love camping.

I got to know a lot more about water heater efficiency and preference here. Heating and Cooling MississaugaThanks for such an amazing article.