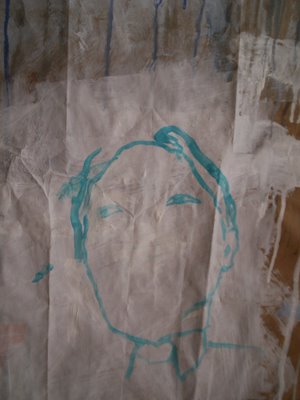 I'm listening to Massive Attack Protection while posting this morning. Good morning.
Okay so I was so tired last night when I was working on this and the paper was so krinkly and I was so frustrated. Poor Stagg, he was like, use a pencil. I never use a pencil when I am painting, I always draw with paint. I think its warmer and less anal looking. But I was crouched on my knees and drawing when tired and after a quick Tecate down the street for Cinco de Mayo. I never drink and work, but was all gung ho last night. Well crouched on the floor, cramped frustrated triggered a memory of working for Sol LeWitt with the worlds biggest asshole COUGH(asmir ademagic) and this was not good not cool. So I was so grumpy.(oh I will write about working for Sol LeWitt and being harassed by the worlds biggest smarmy asshole, don't you worry, but later) Guy Kawasaki deserves my full freshest and most rested performance. So we watched The Great Rock and Roll Swindle and then I just went to bed by 11 last night. Flopped as my grandmother would have said. 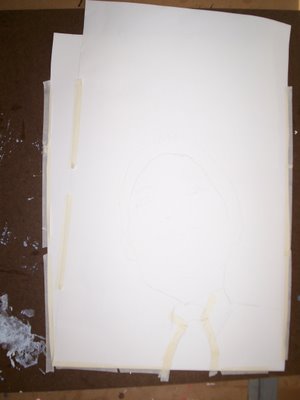 Okay so since it didn't feel comfortable or precise enough painting Guy Kawasaki's portrait on the wrinkly paper I have come up with this. I am using pencil, which Stagg wanted me to use last night, just lightly to get his features all nice. I've stretched the paper cut from a huge roll onto my supersize drawing board. That way, when the paint starts to wrinkle, and it will, I can control it a bit. 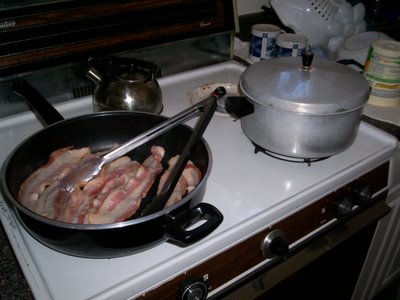 Making some breakfast. That's ox-tail soup broth in the lidded pot, I always have soup bones making stock on the go. I wonder if I could find some bison tail bones...that might be intersting. Had an awesome bison burger the other night at a funny little place that served all game in our neighbourhood, called Grisly's. It was very good food. We watched the Heat and Bulls on big screen. I had three Stellas and was in Canuck heaven. 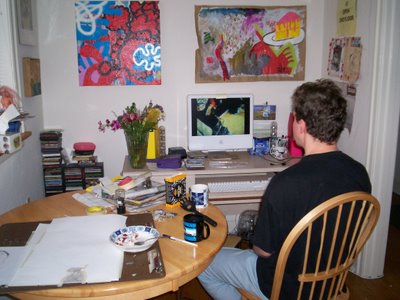 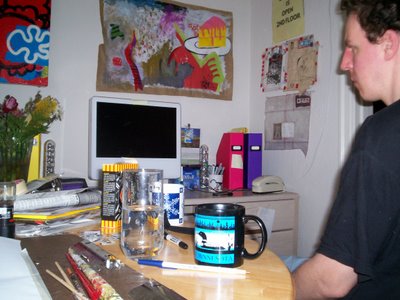 Okay George Clinton is on screen with big star sunglasses on but it didn't come out. I wonder if watching P-Funk will affect my painting? Oh wait, it did come out. 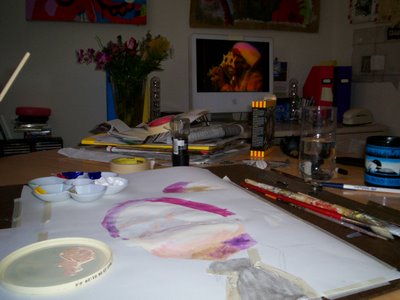 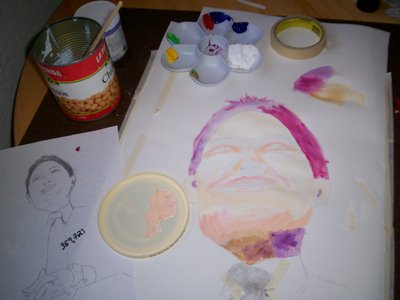 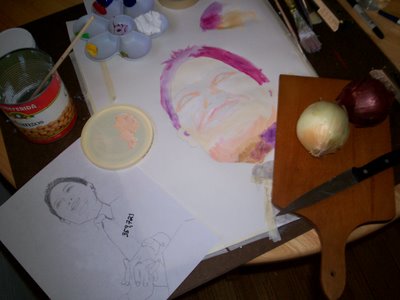 Our apartment isn't huge in the kitchen so I multi-task. I want to watch this dvd too. Isn't it interesting how the onions are similar colours that I have been knocking in his portrait with, very similar. He has really warm skin in the photo I'm using. See that number on his tie in the smaller drawing? That's my rank yesterday at Technorati. Today I'm at 294,902. Slowly but surely Guy Kawasaki! 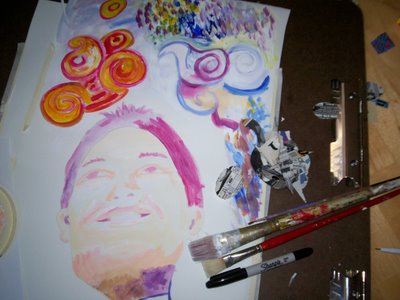 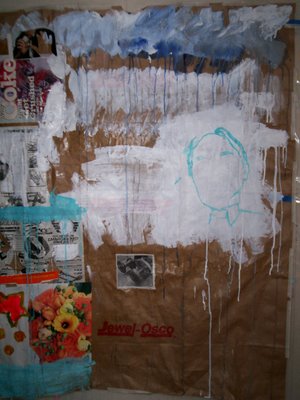 So I am going to cut up the portrait of Guy with clouds and lay it in on top and among this base I started. All grafitti like. I'm going to give Guy Kawasaki some street creds you know, some cool cartel. He;s a handsome man but he's gonna be ubersexy when I'm done with him. Tonight Stagg and I are going Kingston Mines to see Duke Tumato and Phil Guy. (the brother of Buddy Guy.)
Posted by Candy Minx at 13:12

my mistake (well it is nearly half three in the morning) meant to say nice portrait, but put it on one of your other posts, along with a well thought out and deep answer to the post itself!
sorry, just a dumb yorkshireman!
eckt thump (typical yorkshire saying. translation; oh good golly gosh!)

told you it was late, that should read ecky thump!
(and it was the "is it true post")
ttfn

You're inspirin' me here Minxie. Don't braodcast it but I used to be a bit of an artist. (Emphasis on the bit or possibly on piss). Think I might have a bash n post me efforts for everyone t take piss out of.

Now ya see...the idea that you are out there and have paint or brushes or inclination $Dins....see what we don't know abut people. I remember a Michele Shocked concert I was at in Vancouver with my sister and mister anchovy. Her dad was on tour with her playing and at the end of the concert encore like crazy Shocked says, "thank you tonight you heard variations on three chords. Something everybody can do go get a guitar and play some music"

Okay that was her gist I can't remember exactly, but now I am excited to think that maybe a couple visitors here might go into their attics or basements and dig out their art supplies. I use tons of recycled materials which keeps the cost down and recycles materials for environmental concerns. I even use old house paint. And not always expensive paint brushes but house painting brushes.

I think one of the best ways to get rid of the bullshit in the world is to take art making, education, marketing, food ethics into our own hands and share. As the old puck rockers used to say "#*#& the system!"

Thanks for popping by and your thoughts guys,

its a great piccy ur doing

Stumbled upon your blog following some links. It's a very intersting blog, kept me occupied for hours :)
geoff p

when Michelle Shocked introduced her father (wasn't that a great show!!), I believe she played a tune called Homemade Jam - a very important tune for me.........it's about, well you know there's Smuckers and Knoxberry Farm and all that but a little homemade jam wouldn't do a fellow no harm....in fact if everyone played a little homemade jam, those corporate jam factories would go out of business....I have huge respect for Michelle Shocked because, like Prince, she stood up to the big corporate asshole record companies and won.....well I say won, but I know it must have taken a lot out of both of them. Last year on her website, she provided mp3s of her set list and invited her fans to bring their instruments and join her onstage....how cool is that? I think she has the right idea. As you know, I think music really suffers from all the marketing crap that goes along with it (in some cases, all there is is marketing crap.....don't forget to download the ringtone now, ya hear).

ther is a new young band in britain going by the name of the arctic monkeys, and they are shunning any of the media friendly "get together awards" type things. they have a line in one of thier songs

"theres only music, so that there's new ring tones"

how very true in some cases, and this from a bunch of 18yr old working class yorkshire lads.

give em a go, you will love them.

(any one not from yorkshire may struggle with the accent at first, but lyrics are available on thier web site. just google:
arctic monkeys enjoy)

Thanks I think mister anchovy will really l;ike the artic monkeys fat fiz.

And glad to see youd343dpuppy! Thanks for the encouragement.

right homemade jam is where I'm coming from...and then sharing all our home made jam. Um, I think there maybe an idea out there called gift exchange a riff on bartering?

Click on "how to save the world' in the list over there>...I didn't get finished reading it yet, but it was very interesting...

Hi Geoff P, I looked at your link and its for Guinea pigs, very seet. I guess its not a blog though I couldn't find more articles...thanks for stopping by and I'm glad my blog kept you busy for a couple hours, wow! Thats a great compliment, thanks!