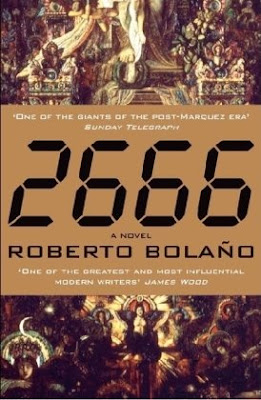 September 2666 comes out in paperback which makes it not quite so expensive or heavy to carry and read on public transit.

This is the best book I read last year...it's so good I read all 900 pages again this spring. It's actually one of the best novels I've read in the last five years. Sure...I've already said this here at this blog...but seriously...if you haven't read this novel yet...it's coming out in paperback. Go and get it! All I can say is the feeling of elation and excitement reading this novel has not been equaled except for when I read Cities of The Red Night/The Place of Dead Roads and Blood Meridian.


The audacity of Bolano's fiction, its disregard for convention and even probability, puts me in mind of a remark a friend once made after a jazz concert. I said I thought the keyboard player had really been taking chances, and he said, "No, he wasn't taking chances, he was doing whatever the fuck he wanted." In every sentence he wrote, every image he conceived, every compositional choice he made, Bolano did whatever the fuck he wanted. In his art as in his life, he left a record of headlong daring that will become a rallying point for young writers for years to come. His myriad-minded fiction adumbrates no theory and swears allegiance to no school, embodying instead an unending search for new aesthetic and moral questions. At a time when the novel, at least in this country, has retreated into caution, he demonstrates again what is possible in fiction -- which is to say, anything. His forms are sui generis, there is no emulating them, but his form-making is exemplary. From TNR: "Last Evenings On Earth" by Deresiewicz 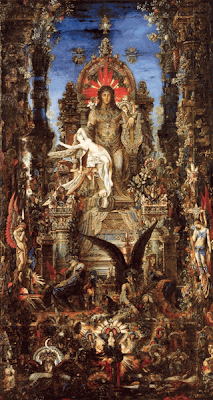 Jupiter and Semele by Gustav Moreau. Art is mentioned a lot in this novel and the cover of the book is worth thinking about.

Jupiter and Semele can be interpreted as 'an allegory of regeneration by death', as Ragnar von Holten has described it, because Moreau himself wrote, "Semele, penetrated by the divine effluence, regenerated and purified by this consecration, dies struck by lightning and with her dies the genius of terrestrial love, the genius with the goat hooves'. The symbolical interpretation of 'this birth-death in one', as Malcolm de Chazal calls it, does not have to be taken literally: 'As voluptuousness is the universal crossroads of the senses, the mind, heart and soul, and also a point-state where death and birth meet halfway, where the entire man is intersected within himself, voluptuousness is for this very reason the greatest source of knowledge and the widest field for studying the deep-seated workings of the human being.' On the contrary, there seems to me to be every reason to consider Jupiter and Semele an exceptional gamble to fix through the medium of painting 'the supreme point capable of being reached from which, briefer than a flash, without having to pay it any attention - thus betraying the voluptuousness itself and accepting that it should betray you — you have the chance of apprehending unrevealed aspects of the world."

Some really good notes about the novel:

Part 1, The Part About The Critics

Sounds like a great book. I will have to check this one out sometime.

Thank you for the link! We're in the process of a read-along, so I only have parts 1 & 2 read and reviewed, but we're doing one section a month. So keep an eye out for Part III, soon.