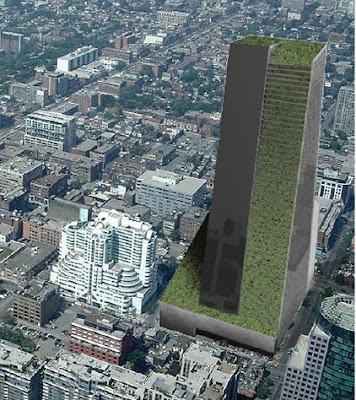 Toronto Sky Farm! Is that next to the Holiday Inn on King? Yes! Gordon Graff's Sky Farm proposed for downtown Toronto's theatre district. It's got 58 floors, 2.7 million square feet of floor area and 8 million square feet of growing area. It can produce as much as a thousand acre farm, feeding 35 thousand people per year and providing tomatoes to throw at the latest dud at the Princess of Wales Theatre to the east, and olives for the Club District to the north. Thankfully it overwhelms the horrid jello-mold Holiday Inn to the west. From Treehugger


We love vertical farms and while they may not be as practical as green roofs, the idea of food being grown right in the city doesn't get any more local than this. New York magazine asked four architects to dream up proposals for a lot on Canal Street and Work AC came up with this. “We thought we’d bring the farm back to the city and stretch it vertically,” says Work AC co-principal Dan Wood. “We are interested in urban farming and the notion of trying to make our cities more sustainable by cutting the miles [food travels],” adds his co-principal (and wife) Amale Andraos. Underneath is what appears to be a farmers market, selling what grows above. Artists would be commissioned to design the columns that hold it up and define the space under: “We show a Brancusi, but it could be anyone,” says Wood. ::New York Magazine 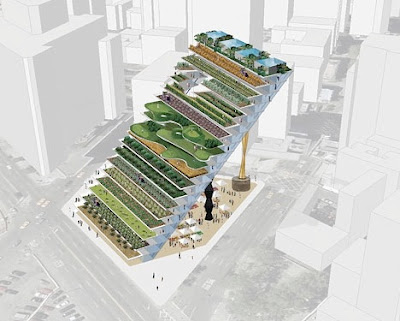 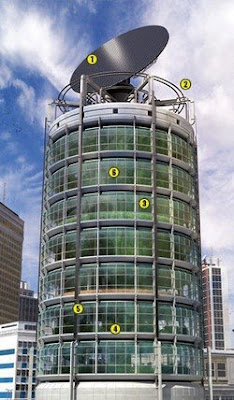 Mike covered the Vertical Farm ideas of Dr. Dickson Despommier earlier, and my, how they have grown. New York Magazine has a spectacular spread on his vision of "a cluster of 30-story towers on Governors Island or in Hudson Yards producing fruit, vegetables, and grains while also generating clean energy and purifying wastewater. Roughly 150 such buildings, Despommier estimates, could feed the entire city of New York for a year. Using current green building systems, a vertical farm could be self-sustaining and even produce a net output of clean water and energy."

A lot has changed since the idea was first proposed. Local has become the new buzzword, we now weigh the carbon footprint of our food, and there have been a few recent disasters in our food production system that make one want to look the farmer in the face. As New York says "Cities already have the density and infrastructure needed to support vertical farms, and super-green skyscrapers could supply not just food but energy, creating a truly self-sustaining environment." Imagine an urban highrise CSA where we just walk across the street from our highrise to the next to pick our dinner.

The article is like the Popular Science Moonbase of the Future essays of my childhood, in a round structure "Inspired by the Capitol Records building in Hollywood."

We love how "Wastewater taken from the city’s sewage system is treated through a series of filters, then sterilized, yielding gray water—which is not drinkable but can be used for irrigation. (Currently, the city throws 1.4 billion gallons of treated wastewater into the rivers each day.)" -this isn't just growing vegetables, it is an urban battery, taking waste and solar energy and producing food, clean water and electricity. 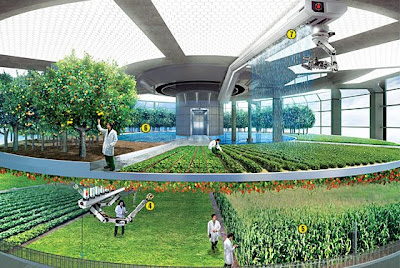 Make your OWN vertical garden for your house or apartment:

Has anyone told Michael Pollan about this?

This is really frustrating to have these dirt and molds eating your homes slowly. You badly need like the New York mold removal team to totally get rid of it. Aside from being clean, health considerations are also an issue since this could affect any of the family members.

Your blog is outrageous! I mean, Ive never been so entertained by anything in my life! Your vids are perfect for this. I mean, how did you manage to find something that matches your style of writing so well? Im really happy I started reading this today. Youve got a follower in me for sure!