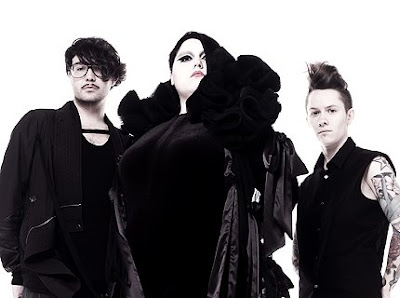 What's that joke about gay couples wanting to get married? They deserve the chance to be as unhappy as straight people. On the Gossip's major-label debut -- 12 Rick Rubin–produced tracks spanning minimalist disco, post-punk, and garage -- the trio extends the gay-positive message of 2006's "Standing in the Way of Control," the single that broke them in Europe seven years after the band started. Yet frontwoman Beth Ditto remains caught somewhere between Donna Summer and Dolly Parton: she loves to love, but all those complications keep her down.
Ditto is obsessed with the word itself: "love" appears in three song titles, not including the dark, pulsing "Four-Letter Word" (which is about you know what). Rarely, as on centerpiece "Men in Love," does she actually celebrate it. She breaks up that track's kicker ("Men in love...with each other...hey!") with expectant pauses, as her phrasing mimics the song's jerky rhythm. On "For Keeps," Ditto sets up an us-versus-the-world argument, but the condition of the settlement is the persistently unfulfillable "need to be free." Ditto's huge voice can't do soft, so it shoots skyward on "Love Long Distance," and coupled with a mechanical piano and canned beat, the band starts to sound a bit catatonic. But the rest of Music for Men is a tightly wound disco-punk conjugation. In the end, that's the only love affair the band happily consummates.

One of the things I love about blogging is getting introduced to artists I've never heard. I really enjoyed listening to The Gossip. Beth Ditto's voice reminds me a little of Cyndi Lauper. As I was reading your post about The Gossip, I started thinking about Scissor Sisters. I looked up Beth Ditto on Wikipedia and it turns out that she's a close friend of the lead singer for Scissor Sisters.

Just checking in. Will have to google Beth Ditto - sometimes I think I am a musical idiot - I've discovered Pandora radio recently - and no one likes my stations - not even me much!

Malcolm, thats cool about your intuition with Scissor Sisters and Ditto. I think she is just awesome. I love their videos too...and I love it that the 80's is so hot right now.

Gardenia, well I read a couple of music magazines every month and always Vibe and Spin. It kind of helps keep me exposed to different music. I love it all! Music is life!