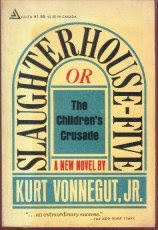 My previous post was with photos of some of the folks we're beginning a reading group with...and we are going to choose books that are spiritually inclined ...or inspiring. Books about the meaning of life I guess. And our first book is Slaughterhouse Five.

Slaughterhouse-Five, or The Children's Crusade: A Duty-Dance With Death (1969), by Kurt Vonnegut, is an anti-war science fiction novel dealing with the World War II experiences and journeys through time of a soldier called Billy Pilgrim.


The Arbitrary Cycle of
Slaughterhouse-Five:
A Relation of Form to Theme
WAYNE D. McGINNIS

Surely the biggest question asked in Kurt Vonnegut, Jr.'s
fiction--and asked almost consistently in his novels--is one
patently unanswerable from without: "What is the purpose of
life?" Like any good existentialist, Vonnegut, putting himself
in league with writers like Barth and Borges, finally answers
the question by affirming that man must arbitrarily make his
own purpose. The real interest for the writer of fiction in how
the purpose is made has resulted in an emphasis on the skill
and intricacy involved in the process in both Vonnegut's fic
tion and that of his contemporaries who take the view of the
arbitrary nature of fiction itself. Today, many of the best
writers are indeed writing about art, primarily.
Slaughterhouse-Five, Vonnegut's major achievement, is es
sentially different from Nabokov Pale Fire or Borges's fic
ciones, however, because it insists on both the world of fiction
or fantasy (Tralfamadore) and the world of brutal fact
(Dresden). Vonnegut's novel urges the primacy of the imagina
tion in the very act of facing one of history's most infamous
"massacres," the fire-bombing of Dresden in World War II,
the source of its great originality.

The poignancy and force of Slaughterhouse-Five derive
largely from an attitude about art and life that Vonnegut ap
parently shares with Louis-Ferdinand Celine, whom he quotes
in the first chapter as saying two things: "No art is possible
without a dance with death" and "the truth is death".

-You can read the novel online here

-We joked about "pulling a George" and watching just the movie. Actually, here is the movie online if any visitors are so inclined. Click here for movie version