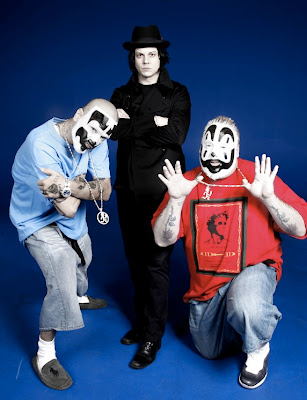 Oh my god, I love this picture. Jack White is collaborating with Insane Clown Posse. Will wonders never. You can hear a song at Pitchfork. Very funny promo below.


6 Corners: "The area's name is from the intersection of three streets—Irving Park Road, Cicero Avenue and Milwaukee Avenue . Its history as an urban center began in the 1840s, eventually becoming the largest commercial center in Chicago outside of the Loop . There is evidence that Native Americans used a ridge along Milwaukee Avenue as a campsite,[3] which would have been higher than the generally swampy surrounding land."

Since getting back from our road trip I've been driving around chicago for basically the first time. We only had the car for a week before we left and I didn't do much city driving especially with the blizzard. It's been pretty cool to get to know the city by driving although I make a lot of mistakes. I have to give myself at least an extra half hour travelling time for any appointments because i get mixed up all the time. There are a couple of corners in Chicago that just break me. They are intersections in Wicker Park and Bucktown with three streets that cross. oh and there is one in our old neighbourhood. And to be honest these "corners" messed me up even when I was walking. ha ha I had an aha moment on the El train the other day...very confused looking at the map for train stops. All of a sudden I realized that I was not getting that the maps were "sideways" and north was to the right of these guides. Duh! Yesterday I stalled out right in the middle of the intersection, light turned red, on the six corners of Milwaukee, Cicero and Irving Park. I heard some really fresh language from other drivers. A lot of honking too.

You know Elvis himself would have to be walking naked down the street before I would ever use a horn in a car. I just kept my cool and held my arms in the air hoping I wouldn't get hit by a car or a bullet. Took a deep breath and re-started the car. I was very proud of myself that when i got lost and turned around, while sweating in the heat I didn't pull over and cry from getting lost. I'm getting the hang of it out there I'd like to delude myself into believing. Happy driving!

Sheila, it is difficult to imagine that there is more honking there than here...and you made me laugh so hard this morning with my coffee. It's quite a funny image and would make a great film clip.

Mister Anchovy, it's spectacular as you would say.

Oh, I am so thinking - of Powwow Highway - and the spiritual Indian who "saw" - he gets his car through looking through the car yard seeing visions of ponies - picks the car - and calls it his pony - it is a GOOD pony - LOL - I think your car is a good pony, a very very good pony!!!
I to think I had the pleasure of meeting it!