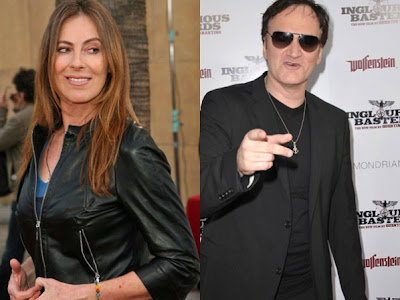 One of the great things about cable and having a movie channel is you see a lot of movies that often get less press than others. Back in the 80's when Canada first got movie channels they played a lot of great movies. A lot of really good almost B-movies. I would often have the tv just on...and would get interested in some movie just for the sake of it. One such movie was The Loveless. It starred a really sexy actor who I had never heard of, Willem Dafoe, and rockabilly musician Robert Gordon. I was taken quite by surprise. The movie is about a motorcycle gang that passes through a small town and just stirs up all kinds of shit. It was very much like some kind of 50's Marlon Brando or James Dean motif. The way the movie looked was really beautiful and the soundtrack, provided by Gordon was super cool. I made note of the director and made sure I've watched everything she made since. Her name was Kathryn Bigelow. Bigelow is an interesting artist for a number of reasons. She made films that were gender-bending because they often included a fair bit of violence and almost always a detailed fight scene. And she was drop dead gorgeous...supermodel gorgeous, actually. She isn't very well known for a lot of people. Her movies didn't always get huge box office but they always had really good characters and cinematography with highly stylized mise en scenes. This year Kathryn Bigelow will finally be on the minds of many movie buffs because her new film, The Hurt Locker, is getting a lot of press and attention. I am really happy for her. Bigelow is the only person I ever wrote a fan letter to...and I am still kind of amazed that Iw as so inspired to write her a letter...and I am also very embarrassed to admit writing a fan letter in public ha ha.

No secret...I love Quentin Tarantino. I think he is wonderful...and I find him super sexy. I know...he's kind of got challenging looks. But I love him. I love how he talks about movies with such passion and hard core knowledge. And then there are his movies. I will pretty much buy the dvd version of all his movies. I've got several Kathryn Bigelow movies including her awesome vampire movie Near Dark. Her strange psycho B-movie Blue Steel I also own. With Tarantino, I have all his movies on dvd. I am hoping he gets some nods now that award season is here for Inglorious Basterds as it is just about perfect. One of my favourite things about Tarantino movies is the strong, often powerful, female characters. So many times the plot hinges on these women, especially in Pulp Fiction, Kill Bill and Deathproof.

(I once went backstage at the El Mocambo, in Toronto, and interviewed Robert Gordon. He was an amazing interview with a massive knowledge of music history.) 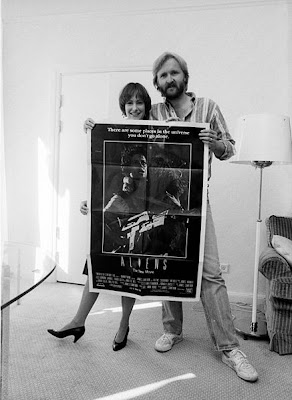 I am mad for James Cameron. I first saw The Terminator on the movie channel...and was so blown away I had to find a repertoire theatre that played it on the big screen. I made the same pledge I made seeing Bigelow's movie after seeing The Terminator to see all of his movies to follow. He is a real prize for Canadian pride! I also love all the stories about him being one tough son of a bitch to work for...the other day on Oprah she asked him if it was true that he nailed a cell phone to a wall on set. He said, no it was a screw gun, a nail wouldn't hold it. What is kind of cool about Cameron is the very fact that The Terminator was a cult movie...often seen by others like me on a cable movie channel and blown away. Critics generally do not like sci-fi films and it was panned by many so-called professional critics at the time of it's release. But the critics didn't have a clue that by the 1980's there were so many of us who grew up on comic books and sc-fi and were ready for decent movies that represented this generation of fans. .James Cameron is a good example of how fans find an artist and support them diehard. James Cameron was once married to kathryn Bigelow and he helped her get support for many of her movies even after their marriage broke up. I always thought that was great. Camerons' films always have strong, even if lightly painted, characters who have amazing chemistry with each other. He seems to really have a grasp on romantic relationships and many of his movies have very funny scenarios between married couples in extrodinary situations. (a quality that Hitchcock also always played out) He always has amazing female characters and for this alone he is a mensch. A seldom mentioned detail about Avatar is the Sigorney Weaver character. She isn't a main character but her part in the movie is really delightful. Tarantino and Cameron have written some of the most important female characters with complex personalities in the last twenty years and for that I am grateful. In fact, they may be even more complex than the majority of female characters in lead roles in romantic comedies and that is just amazing!
Posted by Candy Minx at 10:18

I concur on all counts except the fan letter writing part....no shame in it! Ever.