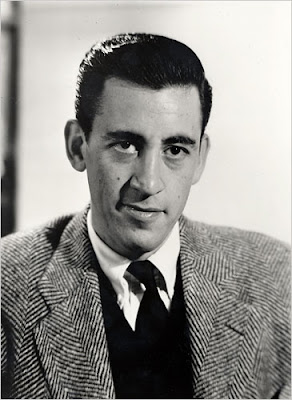 "If you fake the funk, your nose will grow". Bootsy Collins.

From Franny and Zooey...

The voice at the other end came through again. "I remember about the fifth time I ever went on 'Wise Child'. I subbed for Walt a few times when he was in a cast-remember when he was in that cast? Anyway, I started bitching one night about the broadcast. Seymour'd told me to shine my shoes just as I was going out the door with Walker. I was furious. The studio audience were morons, and I just damn well wasn't going to shine my shoes for them, I told Seymour.I said, they couldn't see them anyway, where we sat. He said to shine them anyway. He said to shine them for the Fat Lady. I didn't know what the hell he was talking about, but he had a very Seymour look on his face, and so I did it. He never did tell me who the Fat Lady was, but I shined my shoes for the Fat Lady every time I ever went on the air again-all the years you and I were on the program together, if you remember. I don't think I missed more than just a couple of times. This terribly clear, clear picture of the Fat Lady formed in my mind. I had her sitting on this porch all day, swatting flies, with her radio going full-blast from morning till night. I figured the heat was terrible, and she probably had cancer, and-I don't know.Anyway, it seemed goddam clear why Seymour wanted me to shine my shoes when I went on the air. It made sense."

Franny was standing. She was holding the phone with two hands. "He told me, too." she said into the phone. "He told me to be funny for the Fat Lady, once." She released one hand from the phone and placed it, very briefly, on the crown of her head, then went back to holding the phone with both hands. "I didn't ever picture her on a porch, but with very-you know- very thick legs, very veiny. I had her in an awful wicker chair. She had cancer, too, though, and she had the radio going full-blast all day! Mine did, too!"

"Yes, Yes, Yes. All right. Let me tell you something now, buddy...Are you listening?"

"I don't care where an actor acts. It can be in summer stock, it can be over the radio, it can be over television, it can be ina goddam Broadway theatre, complete with the most well-fed, most sunburned-looking audience you can imagine. But I'll tell you one a terrible secret-Are you listening to me? There isn't anyone out there who isn't Seymour's Fat Lady. That includes your Professor Tupper, buddy. And all his goddam cousins by the dozens. There isn't anyone anywhere that isn't Seymour's Fat Lady. Don't you know that? Don't you know that goddam secret yet? And don't you know-listen to me, now-don't you know who that Fat Lady really is?...Ah, buddy. It's Christ Himself. Christ Himself, buddy."

-Article in New York Times
-One of my favourite excerpts from Franny and Zooey
Posted by Candy Minx at 13:54