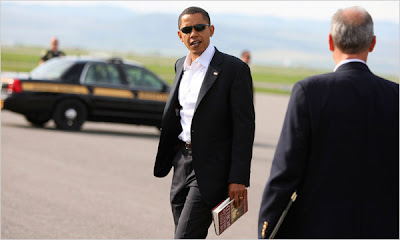 Mr. Obama’s first book, “Dreams From My Father” (which surely stands as the most evocative, lyrical and candid autobiography written by a future president), suggests that throughout his life he has turned to books as a way of acquiring insights and information from others — as a means of breaking out of the bubble of self-hood and, more recently, the bubble of power and fame. He recalls that he read James Baldwin, Ralph Ellison, Langston Hughes, Richard Wright and W. E. B. Du Bois when he was an adolescent in an effort to come to terms with his racial identity and that later, during an ascetic phase in college, he immersed himself in the works of thinkers like Nietzsche and St. Augustine in a spiritual-intellectual search to figure out what he truly believed.New York Times. And 25 books the President should read.

Shakespeare's tragedies. I like that in a leader. I wish my parents had read King Lear.

Check out this "going out of business" advert:

A president who reads books?! And writes books?!

gotta love a man who reads.

I think Obama's book,
"Dreams of my Father" was the beginning of my love for this guy! Then I continued to read searching for who he is. I've had a smiling, tearful, delightful day watching the innauguration and the surrounding festivities.

He and Michelle were absolute FIREWORKS as they danced together at the balls! The little girls are gracious and poised - what a family - what a beautiful, magical, marvelous, brilliant couple and family. I'm SO excited about our future - - - won't be easy, won't be fast, but what fun to be behind such a leader. I would not be surprised to find him not only a leader of our country, but one of the great world leaders when history shakes it all out.

I can't say how privileged I feel to have lived through a time of the 60's movements to this wonderful day today.

The way my family is crying and carrying on, (with joy) I would swear there is some Afro American blood somewhere in our past!

And, of course, I am so impressed there is now a White House grandma!

SME, even better, it's what books mean to him.

Gardenia, I was embassed how I kept crying about stuff, but I got a lot of phone calls and texts yesterday...and lots of people felt the same way. I part laughed part, choked when the camera went on Mary J. Blige's face and she was soaking wet! This is a time Americans citizens should feel proud. It's bigger than skin colour, or "the youth vote'...it's about how to live and think.

I heard he's currently reading The Road, which I know you must appreciate!