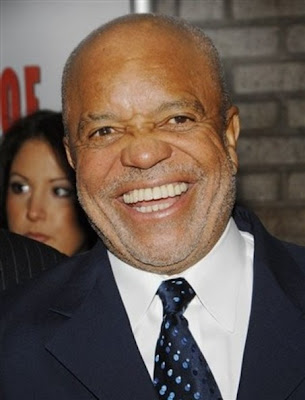 Divorced, unemployed and broke, Berry Gordy, Jr. borrowed $800 from his family to start a record label, Motown Records. 15 years later, it became the largest and most successful business owned by an African-American in the United States, despite the roadblocks of racism and pre-civil rights.

Now, 50 years later, Gordy and Universal Motown records will celebrate the iconic Deroit record label with a 50th anniversary party Monday at the Motown Historical Museum when it will be declared "Motown Day" by city and state officials.

Malcolm had a post the other day about Motown turning 50. I can't believe it. It feels like yesterday that a bunch of my family gathered around the tv to watch the 25th Anniversary of Motown. We were also taping it...and then the unbelievable happened.

Sure, I know there are so many people who remember the first walk on the moon. They can remember where they were etc. My grandmother was wild about the walk on the moon. I get it, but for something else: Jacksons moves. Going to the moon seemed normal, a natural part of my life...but bringing the moon to earth? That was cool.

There were a few of us that night, my daughter, aunt, uncle and grandparents and we played the recorded show with his dance over and over and over that night. And we all took turns trying to do the Moonwalk.

Always loved the old 60's style. Some of it 'crossed over' to become what is known here as 'Northern Soul' - ie played in the clubs of Wigan(Casino) and Blackpool(Mecca) to name but two.

Many British artists took on this sound to record 'Motown' like songs for the Northern Soul circuit.

The Northwest of England is particularly endebted to Berry for the sound of Northern Soul.

As we say in't Northwest of England...Keep The Faith

I watch a lot of interviews and read articles/interviews with musicians...and so many times an American performer will say...they didn't have work or audience except for U.K. The soul scene from your area is really hot.

Never mind all the fashion and dance moves coming out of it too! Northern Soul is something for you to be proud of for sure!

What an amazing success story!

Happy birthday indeed. It's my fave music other than Atlanta R&B.

Your link to Malcolm leads to Waiter Rant LOL!

And that move of Michael Jackson's was just incredible!!!