Shout Out To Tomcat and Bob: The Soupmasters! 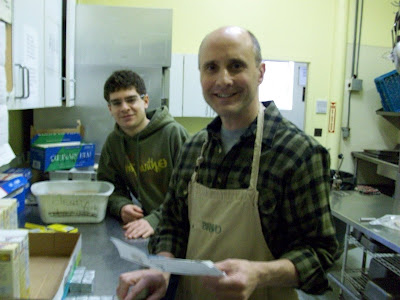 Tomcat and Bob. Tomcat, left, is a full time volunteer from Germany and he has never made soup before. Bob has been volunteering here at the Franciscan Outreach for almost four years. We had never met before because he usually works here weekends. Bob, right, works full time during the week at his regular job, and his boss knows he works in the kitchen here on weekends. Bob's boss is one of the main reasons I'm posting these pictures today. His boss wanted to do something to contribute so he bought all the ingredients we have used to make soup for 130 people! YEA BOB'S BOSS! I happened to have my camera with me on Saturday afternoon so I thought it would be fun for Bob's boss...who is all the way in Cleveland ("we love you Cleveland!") to see what his ingredients made for supper Saturday night. Bob, right, is holding a recipe he printed off the internet for Bean and Barley soup and he had to convert a recipe for a family to the size to serve 130 guests! 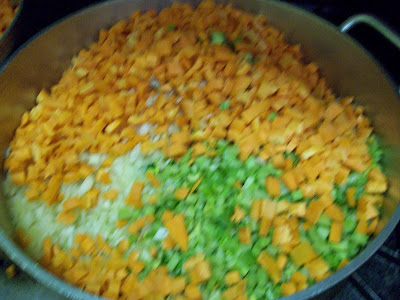 Three of us chopped up carrots and celery on Friday night to have ready for the soup making on Saturday. Actually, it was four of us, two high school volunteers, their mum and me. The girls were getting hand cramps by the time we finished. The carrots were about the size of our arms and the quantity was massive for this much soup. It took six bundles of celery stalks. 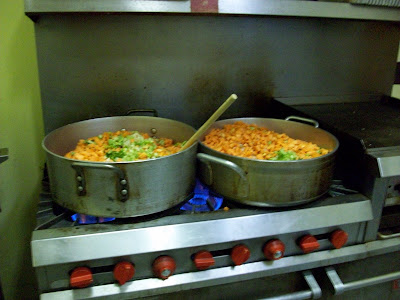 It takes two large saute pans to get the onions, garlic, celery and carrots cooking to go into the soup. A lot of olive oil too. Bob probably used about 15-20 tablespoons in each pot. 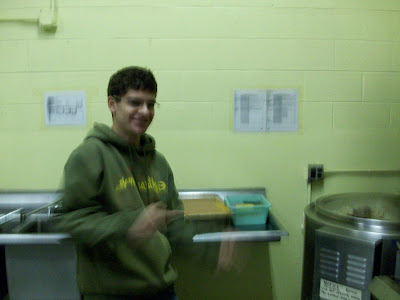 Tomcat doing his best impersonation of a soup chef. Too bad I'm laughing so hard, I am jiggling the camera. 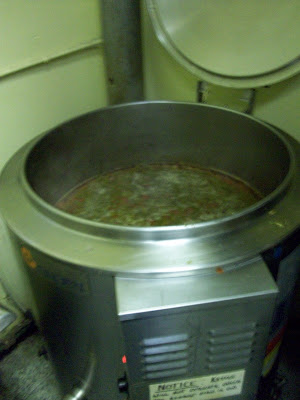 Yummy. The soup is starting to come together. Isn't this soup kettle amazing? 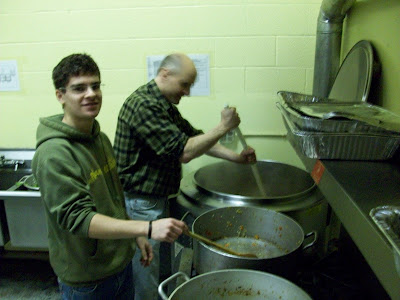 The soup kettle comes up to our waists! You need a spoon almost as big as an oar to stir it. 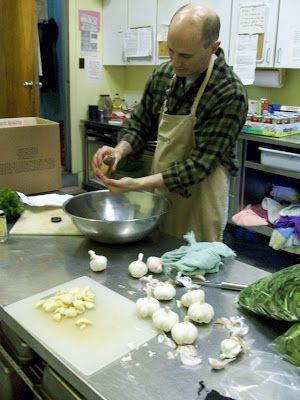 Yep, thats a lot of garlic! And when I took this pic, we'd already put a fair bit into the saute of vegies. 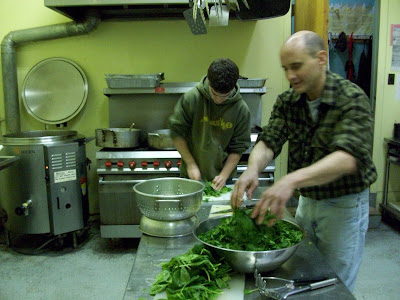 Maybe in this picture of Bob and Tomcat washing and sorting spinach to chop...you can really see the scale of the soup kettle. It's the contraption next to the industrial size gas stove. 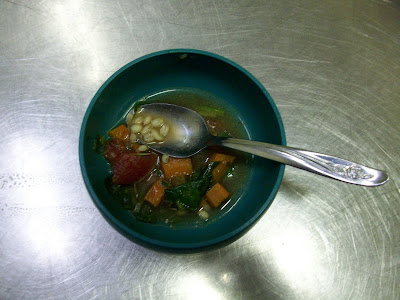 The soup came out delicious! After we had all the ingredients into the kettle...and even though it needed to simmer for at least another hour...we had to try it, and it was wonderful! Great work Bob, Bob's boss and Tomcat!
Posted by Candy Minx at 10:27

I love this post and the pictures, Candy! Call me crazy, but I am a kitchen voyeur...I love seeing other commercial kitchens and their operations! That soup kettle is indeed very amazing and impressive. I guess a soup kitchen needs that kind of equipment. I haven't made soup for that many people before, but maybe for about 50 and I just used a huge stock pot I could barely stir because it was so much taller than me...

just eating chips with chili and garlic mayoneisse dip at work on nightshift. A nice bowl of soup would have gone down a treat too! Looks lovely

Sounds like the most awesome soup! And max nourishment! I too love the big pots -