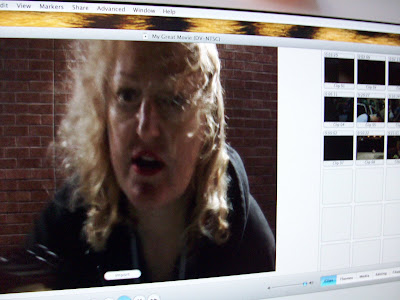 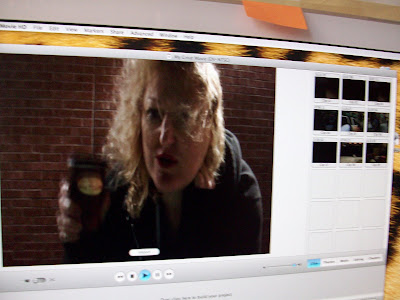 What are we looking at? These are stills on my iMovie editing program. I am going through tapes and writing down what each one has on it, the image, brief dialogue, action, date, location. The clip you see here is me at 4 a.m. just arriving by bus to London Ontario after a ten hour ride. Yes, it's very windy outside. I have to phone my friend John Vanderheide and wake him up. I've gone across the street from the Greyhound station in London to get a cup of Tim Horton's. I think it's very funny that I try to climatize the video with this moment. Once you get going on editing or archiving, it is a surprisingly compelling activity even though it is tedious. I thought maybe a couple visitors would like to see what a strange activity it is to make a film, especially at this low budget and prosaic stage of the process. 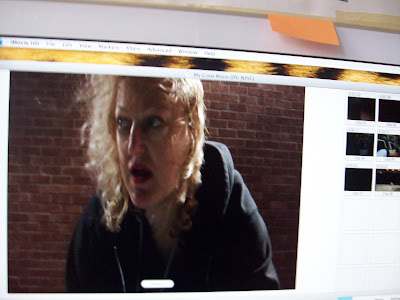 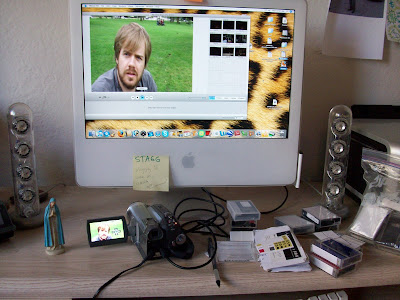 This is what it looks like while I am going through these particular tapes. As I wrote here a couple weeks ago with "Where Am I" post I am going through each tape of interviews I've been conducting for the last two years on this particular documentary. (I have two other projects too...one on performers, and one on employment culture). Above is my friend John Vanderheide. He and I met through an online bookclub and we share a love of William Burroughs and Cormac McCarthy among other things. Here is a still of John and I talking in London Ontario in 2007. The little notebook on the desk has my records of peoples names and dates in the tapes. So I am partly cross referencing these original notes.I have business cards of people I've been trying to get budget and production help with too. I landed up phoning John this morning while going through his interview.. It's easy to start brainstorming or thinking of many things while trying to focus on the images etc. We had a great conversation catching up. Even though I realize this isn't the fanciest equipment or cameras...and I really work in a kind of grassroots manner...I have been loving doing this project, and I hope to someday show it finished to others. This is so low budget it scares me at times. There are many times I feel like I am in a futile process. Like who cares...what compels any of us to make a series of narratives with words or images? Especially without any kind of financial backing or reward or safety net? The interview in this tape is so interesting as John is an innovative and sensitive thinker...After watching this I just had to phone John and chew the fat. I've got a lot of challenges ahead in order to make this interesting for an audience and to follow through on more interviews. Wish me luck! 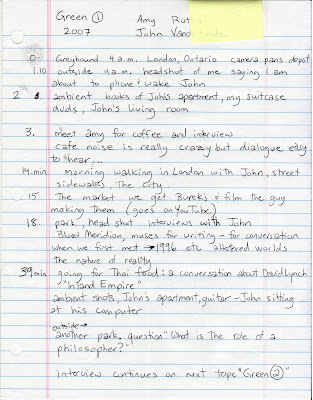 Above is a scan of my notes for editing. I'm sure there is some other faster high-tech method that others use..but I have to do it, at least at first, by hand. I know I know...I could set up a word program but I find it way more comfortable to sit play the footage and write these notes.I also write my scripts by hand with a pen. I use the yellow tab fullscap paper. You know yellow with green lines and red margin border? I'll type it out later myself but for some reason I have to write dialogue by hand. If you click on the above image you can read the notes.

John Vanderheide is not only a wonderful person, he is a great person to spend the day talking with....and he's a natural on camera. He was one of my first interviews for this long term project and I love the discussion we have. Meanwhile as I said earlier, we have a common love for William Burroughs and Cormac McCarthy. John sent me a copy of a paper he wrote that was recently published ina German Journal of criticism. It's a 12 page essay and Stagg and I intend to put it in our next zine. Stagg also loves William Burroughs. Here is the abstract:

The experimental novels of William S.Burroughs approach the idea of community froma functionalist perspective. For Burroughs, any form of organized communal life must be understood as an "artifact designed for a purpose". Throughout his career, Burroughs has opposed what he would call "control societies" that exploit the many to empower the few with alternative "partisan" formations that function to realize the evolutionary potential of the human species. But to fully appreciate Burrough's vision of both control societies and their revolutionary counterparts, reader need to familiarize themselves with the complex "mythology" that the novels are said to embody. This mythology both diagnoses the reason for humanity's "fall" into control, and the rememdy by which it can wrest iself free. As I shall argue, Burroughs constructs this remedy-the purpose of the revolutionary community-as a kind of "apocatastasis". This is a concept that has had divergent applications in both "pagan" and Christian metaphysics. Burroughs exploits various elements of both applications to produce a unique theological-political notion that contemporary enlightenment thinking would do well to incoprporate into its critical arsenal. 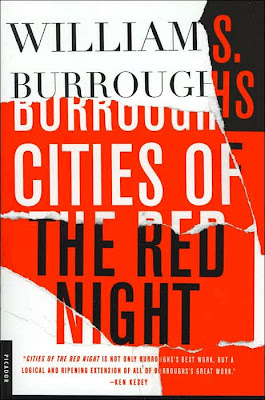 I believe this is one of the greatest novels ever written. Oh, yeah, it's dirty, it's experimental and it's a roaring adventure of pirate-cowboys, sex, within a controlling matrix, with a disease that forecasts the AIDS virus! Williams is most famous for his early heroin beat novels...but this trilogy is where Burroughs even transcends his own opus: Way before The Matrix and before cyberpunks in Nueromancer and four years before Cormac McCarthy would venture into his own version of Western novels. This novel is the proto-Blood Meridian. No one can match William S. Burroughs!

Synopsis
While young men wage war against an evil empire of zealous mutants, the population of this modern inferno is afflicted with the epidemic of a radioactive virus. An opium-infused apocalyptic vision from the legendary author of Naked Lunch—the first of the trilogy with The Places of the Dead Roads and his final novel The Western Plains.
Los Angeles Times Book Review - John Rechy
Cities of the Red Night is Burroughs's masterpiece. In it, the world ends with a bang—and they barely perceived winter, disguised by the wicked smile of one of the most dazzling magicians of our times.

-Cities of the Red Night at Amazon
-Barnes and Nobel precis of Burroughs Western Plains, the final novel in Burroughs masterpiece trilogy.
-Low Budget Sound Editing
-Are you making a video? Some tips to make it look more posh :)
-10 Minute Film School with Robert Rodriquez


I am never happier than when I am doing anything to do with film making. I love being on sets, I love directing actors and interviewing real people. I love sitting and replaying and breaking down and editing the footage. Seriously, I am never happier almost ever. Okay, well I love talking about William Burroughs too ha ha!
Posted by Candy Minx at 11:48

I reckon I'd enjoy that Burroughs novel. I liked Naked Lunch and I kind of see where he was coming from on the socio-political front also.

I loved Naked Lunch (have the Criterion Cronenberg dvd set too)...and "Cities of the Red Night" is even better!

So this gives us an idea what Miss Candy does for a living. Glad to hear things are going good. Talk to you soon.

i love the red night trilogy. and i am curious to see vanderheide''s paper if he would finish it already (complains the guy who never made it past sophomore year of college hehe)