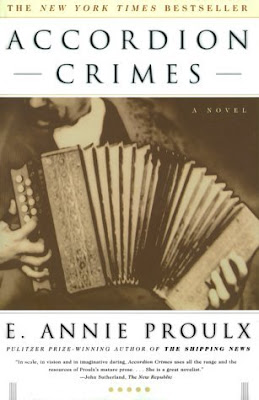 Published in 1996, E. Annie Proulx’s Accordion Crimes traces the origins of the United States through the narratives of a series of families, whose stories are all bound together by a green button accordion. Proulx describes the accordion’s origins in Sicily and charts its travels to New Orleans and beyond through the hands of other generations – black, white, French, German, Mexican, Polish – showing the disparate backgrounds of each but connecting them all through the instrument’s versatility to their various musical styles.

"America's ethnic minorities have rarely been rendered with the insight, intuition and unsentimental candor that Proulx brings to the large canvas of characters and reaches of landscape in this ambitious new work. The narrative has eight parts, each composed of short vignettes that depict the cultural baggage the attitudes, behaviors and social conditioning that immigrants brought with them, and the ways in which they joined, yet held aloof from, American society. Beginning in the late 1800s and ending 100 years later, the novel follows a vividly realized cast of characters, whose names are as colorful as their stories: Ludwig Messermacher, Abelardo Relampago Salazar, Dolor Gagnon, Onesiphore Malefoot, Hieronim Przybysz. Their common bond is ownership of a green button accordion, which was brought to these shores by a Sicilian immigrant and, after his death at the hands of a lynch mob, was transported back and forth across the continent by various combinations of inheritance, violence and bad luck. With mesmerizing skill, Proulx summons up the attitudes and speech of her characters, vigorously detailing a formidable number of settings, including New Orleans, Hornet, Texas, Random, Maine, Prank, Iowa, and Old Glory, Minnesota. She can evoke a teeming, fetid slum as clearly as she can a Montana ranch. An invariable characteristic of these immigrants and their families is the tendency to think of others as "Americans." In their own minds, they are still Italians or Germans or Norwegians or Poles or French Canadian or Cajuns. Almost without exception, they express ancient prejudices and newfound racism: the New Orleans natives hate the Italians, who hate the blacks; Iowa's Germans hate the Irish. What makes all this so spectacular is that Proulx is a master at incorporating potentially numbing detail and specificity from the components of an accordion to the bloodlines of Appaloosas and the stages of a Polish funeral into her vigorous prose. Traditional ethnic music played by various characters during their brief ownership of the increasingly derelict accordion is conveyed with impressive authority. The range of scenes, from a drunken birthday party that resembles an animated Booth cartoon to a brutal reaction to a civil rights sit-in at a lunch counter, bespeaks a brilliant imagination. Proulx makes grotesque accidents, bloody catastrophes and bizarre events seem an inescapable part of human existence. If eventually some sameness of mood occurs, and a resultant diminution of tension, this is balanced by the reader's interest in the accordion's odyssey and in the lives it touches en route. For this is a cautionary tale in which pride and greed and self-delusion vie with basic human needs for love, comfort and spiritual sustenance."

There are a number of parts of that book which I think are really excellent, and beautifully written too. Unfortunately, I don't think it was pulled together so well as a novel. I think it might have been more powerful as a series of short stories under the same title. I struggled with following the green accordion.

Still, the book gives us some good insights into pockets of American culture. Another book I would recommend (and I don't think this one is fully successful either, but is also well worth a read) is The Clarinet Polka by Keith Maillard.