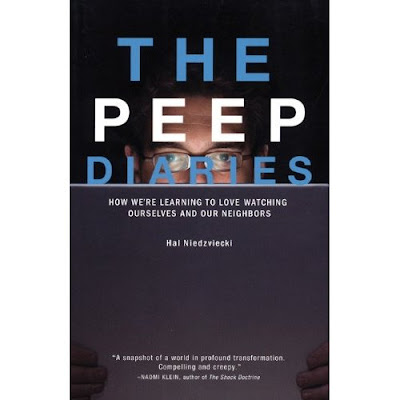 A new book on the idea that we've become some kind of over peeping tom culture is published by Hal Niedziecki...and he has a blog. I took a few minutes to read some of his entries and it looks like a pretty thoughtful joint. Looks like Oprah put this book on her top 25 summer reading list...

I tend to have a much more positive attitude towards people sharing their ideas, opinions and lives online...but it's nice to hear someone elses perspective. At first I was worried this book was going to be all doom and gloom,but maybe it's more of a work in progress...

"Real Simple collected some of the best books out there to help you find your great summer read. . . . If You're Having On-Line Withdrawal. . . . Take a peek at The Peep Diaries an erudite (but not too erudite) look at the culture that Facebook, Twitter, et al. have spawned." --Real Simple Magazine

"Hal Niedzviecki's new book coins the term 'peep culture' and harnesses a ton of research - as well as his impressive analytical skills - in a way that's sure to make the term stick. Peep culture refers to the phenomenon that currently finds us all yearning to watch and be watched. It's spawned everything from reality TV to Facebook to complex spy technologies used for entertainment and other, not so benign purposes. . . . Writing with astonishing clarity - and even beauty - Niedzviecki piles on the ironies. In peep culture, TV shows like 'Cops,' originally intended to curb crime, wind up promoting it. . . . Essential reading." --NOW Magazine

"Ubiquitous video technology and the Internet have ushered in a "peep culture" that makes us all either--or simultaneously--exhibitionists or voyeurs, according to this eye-opening study. In good participant-observer fashion, Niedzviecki (Hello, I'm Special) dives into our mania for observing and revealing pseudo-secret personal information: he starts a blog, applies to reality television shows, does video surveillance around his house and slips a GPS tracking device into his wife's car. He's content to merely interview, rather than join, the middle-aged couples who post their amateur porn online. He argues instead that peep culture reprises an ancient impulse to bond through the sharing of intimacies, but worries that our digital version of village gossip and primate grooming is a weak and fraudulent foundation for community (out of his 700-odd Facebook friends and blog readers, only one showed up for his offline party). Niedzviecki's smart mixture of reportage and reflection avoids alarmism and hype while capturing the strange power of our urge to see and be seen." --From Publishers Weekly
Posted by Candy Minx at 15:55