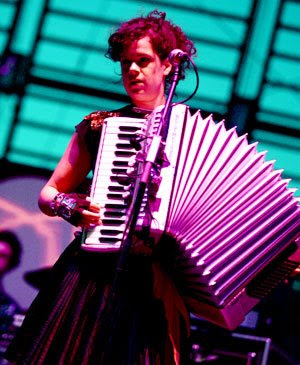 For Mister Anchovy as it's officially accordion month...the beautiful Régine Chassagne of Arcade Fire. I'm going to see if I can make an accordion related post every day this month and not go crazy. Har!

-The piano accordion is the official musical instrument of the city of San Francisco and has been since 1990.
-Actress Lucy Liu plays the accordion
-Guitarist Nils Lofgren started on the accordion.
-Billy Joel and Barry Manilow also play the accordion.
-The accordion is a member of the reed family, not the keyboard family.
-The first United States-made piano accordion (the ones with the keys on it) was manufactured in San Francisco back in 1907. -It was at the Guerrini Accordion Company on DuPont St. (Grant Ave., near Columbus Ave.)
-When people think of an accordion, they usually envision that large, black monstrosity with piano keys on one side and about a thousand buttons on the other side. However, the accordion family also includes Cajun button boxes, chromatic and diatonic button accordions, the concertina, the bayan, and the bandoneon.
-Isn't the accordion just being used at weddings and Bar Mitzvahs? Heck no! Shania Twain's immensely popular Come On Over CD has accordion on a couple of tracks. Los Lobos. Bruce Hornsby plays the accordion and uses it in shows. Counting Crows use accordion a lot. Here in San Francisco, the show Forever Tango was a huge hit and featured two bandoneonists.
-China is the largest manufacturer and exporter of accordions in the world.
Posted by Candy Minx at 18:00

Really interesting info! Since visiting Mr. Anchovy's blog, I have quite an appreciation for the amazing instrument, the variety, and the kinds of music it lends itself to. A month of this should hit - as my grandson says, "The Geneous Book of Records." The posts will show what a wonderful and versatile instrument the accordion is with a rich history - I'm sure!

Good stuff! I never would have guessed that about Billy Joel, Manilow, or Lucy Liu. I just remember that I have a friend who used to play the accordian when she was younger. I'll have to find out if she still has it.