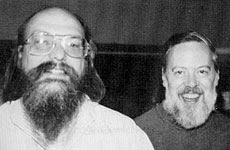 In August 1969, Ken Thompson, a programmer at AT&T subsidiary Bell Laboratories, saw the month-long departure of his wife and young son as an opportunity to put his ideas for a new operating system into practice. He wrote the first version of Unix in assembly language for a wimpy Digital Equipment Corp. (DEC) PDP-7 minicomputer, spending one week each on the operating system, a shell, an editor and an assembler.

Thompson and a colleague, Dennis Ritchie, had been feeling adrift since Bell Labs had withdrawn earlier in the year from a troubled project to develop a time-sharing system called Multics (Multiplexed Information and Computing Service). They had no desire to stick with any of the batch operating systems that predominated at the time, nor did they want to reinvent Multics, which they saw as grotesque and unwieldy. More of the really interesting story here

In the 1980's I had a friend who worked in a small legendary Canadian publishing house on the campus of U of T. I would go to visit him at work and he showed me all the really cool Macintosh Apple computers. They could share screens, and make amazing prints of art, archives texts. It was a wonderful place called Coach House Press and began in the 60's...Tucked away on Toronto’s historic bpNichol Lane, Coach House Books has been publishing and printing high-quality innovative fiction and poetry since 1965. Coach House is Canada’s most venerable literary press and has, during the past forty years, published books by Michael Ondaatje, George Bowering, bpNichol, Nicole Brossard, Christian Bök, Guy Maddin, Steve McCaffery, Gail Scott, Jonathan Goldstein, Anne Michaels, Michael Redhill and hundreds of others. A refuge for the refined, an asylum for the aesthete, a sanctuary for the scribe.

I also had (still do have and he still works there) a friend, who worked at a particle accelerator at Triumf in Vancouver...who was always turning m on to weird, alternative foods, science, medicine...and when I told him about hanging out at this publisher and all the awesome computers they had...he said...why don't you hang up the phone...and go write to me on the computer. I was like, "What?"

My friend Pete in Vancouver who could name every star in the night sky said, "Yeah, forget the long distance phone, hang up and write me on the computer, it's free.It's called electronic mail." It turned out that...of course everyone knows this now...that universities had Unix on their facilities. At that time, about 1988, the screen for inter-computer writing was plain black with white text. My friend Pete gave me his electronic mail address at Triumf. And my friend at Coach House helped me send him messages. Pete also used to spend a lot of time reading (lurking har) at Harvard Paleontology BBS (BBx is like the old fashined term for "web board" or forum). So my first web board experience was also as a lurker at the haarvard Paleontology forum. These Harvard folks could fight. The major discussion occurring when I first visited the forum was about swimming apes. It's called Aquatic Ape Hypothesis. The "discussion" was a verbal banter part Shakespeare part street knife fight and a delightful precursor to reality tv spectacles. It was some of the best discussions online I've ever read...these paleontologists were eloquent and evil. Har!

I should add that my friend Pete was horrified I was writing him on an Apple computer, he said "No self-respecting scientist would be caught dead using a Mac." He was so funny.

Thompson and Ritchie were the consummate "hackers," when that word referred to someone who combined uncommon creativity, brute force intelligence and midnight oil to solve software problems that others barely knew existed.

Their approach, and the code they wrote, greatly appealed to programmers at universities, and later at startup companies without the mega-budgets of an IBM, Hewlett-Packard or Microsoft. Unix was all that other hackers, such as Bill Joy at the University of California, Rick Rashid at Carnegie Mellon University and David Korn later at Bell Labs, could wish for.

"Nearly from the start, the system was able to, and did, maintain itself," wrote Thompson and Ritchie in the CACM article. "Since all source programs were always available and easily modified online, we were willing to revise and rewrite the system and its software when new ideas were invented, discovered, or suggested by others."

Another advantage of Unix -- the second "wow," as Salus puts it -- was that it didn't require a million-dollar mainframe to run on. It was written for the tiny and primitive DEC PDP-7 minicomputer because that's all Thompson and Ritchie could get their hands on in 1969. "The PDP-7 was almost incapable of anything," Salus recalls. "I was hooked."

A lot of others got hooked as well. University researchers adopted Unix in droves because it was relatively simple and easily modified, it was undemanding in its resource requirements, and the source code was essentially free. Startups like Sun Microsystems and a host of now-defunct companies that specialized in scientific computing, such as Multiflow Computer, made it their operating system of choice for the same reasons.

Then, in the late 1970s, AT&T realized it had something of commercial importance on its hands. Its lawyers began adopting a more favorable interpretation of the 1956 consent decree as they looked for ways to protect Unix as a trade secret. Beginning in 1979, with the release of Version 7, Unix licenses prohibited universities from using the Unix source code for study in their courses.

No problem, said computer science professor Andrew Tanenbaum, who had been using Unix V6 at Vrije Universiteit in Amsterdam. In 1987 he wrote a Unix clone for use in his classrooms, creating the open-source Minix operating system to run on the Intel 80286 microprocessor. Entire article here

The video in this post is the iconic first tv ad for a home computer. I was watching the Superbowl on Jarvis when this ad came on and it blew my mind. People talked about this commercial for weeks later. 1984 used the unnamed heroine to represent the coming of the Macintosh (indicated by her white tank top with a Picasso-style picture of Apple’s Macintosh computer on it) as a means of saving humanity from "conformity". Now the commercial seems so tame, so pedestrian, but it felt like it was mind-blowing back in the early 80's. And it was directed by the brilliant Ridley Scott...a full year before the John Hurt movie version of 1984, directed by the also fantastic, Michael Radford.
Posted by Candy Minx at 11:24